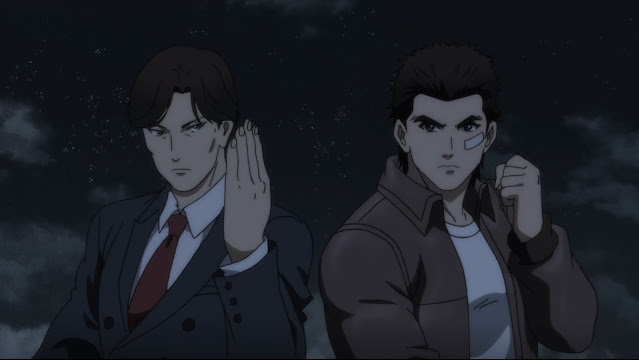 This is it, the first games story all ends on this episode. It has been a much faster run than the game with most of the walking around and talking to people being done in short montages, but still a great run. So, let's not waste time, click "read more"

The episode begins with with Ryo and Guizhang fighting each other with members of The Mad Angels watching them and placing bets on who will win. With Ryo's inner dialog, it is revealed that he left a secret message for Goro in hopes that he will rescue Nozomi. Goro does make his way to the warehouse where Nozomi is being held and overhears a conversation from the guards watching her. 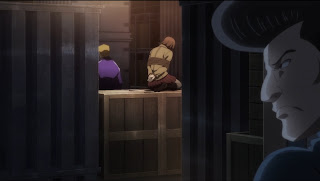 This conversation reveals that The Mad Angels plan to kill both Ryo and Guizhang once they are tired from their fight and Goro knows he has to do something to help. Goro runs to Mai for help. Mai does not think the cops will help because of Goro's reputation, so she decides they need to take action themselves. Mai's plan is to steal a forklift and use it to smash into the warehouse. This is when the two of them are caught by Mark.
Meanwhile, Ryo and Guizhang are still fighting as Ryo begins to lose faith that Goro got his message. The two of them are getting tired and the situation is looking bad. Both of them use the Swallow Dive leg move and go down. Terry is thrilled as he believes his plan is complete. 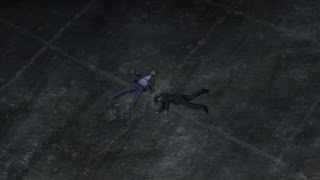 Back at the forklift, Mark decides he will drive the forklift because neither Goro or Mai have any experience with one. The rescue is quick, Mark crashes through the garage door and pins the two guards against a crate with the fork end. Goro and Mai rush in to untie Nozomi and the 4 of them drive out where they see Ryo and Guizhang about to be finished off. However, it is revealed that the two of them faked being taken out because Ryo managed to whisper the situation to Guizhang in the middle of their fight. Now, the two are up and ready to take on the gang together.
I really like the bigger roles they gave to Goro, Mai, and Mark. 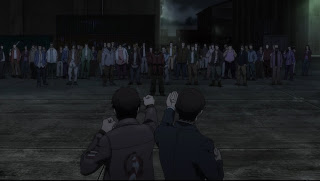 Ryo and Guizhang go all out against The Mad Angels. Despite being outnumbered, the gang members are no match for the skilled Martial Artists and are being knocked out one after another. After less than 2 minutes, only Terry is left and Ryo decides to leave him to Guizhang because his business with them is done. It is a short fight; Terry tries to play dirty with a metal bat, but is still no match for Guizhang.
In the games, Guizhang is the one who wanted to fight Terry alone. Making it Ryo's idea sounds a bit off for his character, but I feel like there was a mutual understanding. 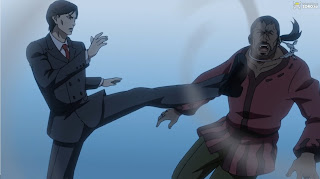 As Ryo and Guizhang are leaving, Terry gives Ryo a warning about Lan Di. Simply saying that defeating The Mad Angels does not mean anything compared to the powerful group that Lan Di has in Hong Kong. Despite this, Ryo is still determined to go to Hong Kong, so Guizhang says he will convince his Father to help him travel there, Ryo thanks him.
That great big battle was condensed into 2 minutes. None of the stronger members that stood by Terry in the game makes an appearance.
Goro, Mai, Mark, and Nozomi are waiting for Ryo and congratulate him on surviving this attack. What follows is collection of wrapping up all the loose ends. Nozomi gets emotional after hearing of Ryo's plans to go to Hong Kong and decides to move to Canada to be with her parents, Ryo quits his job and says goodbye to Mark, Mai and Goro tell Ryo that they are engaged and have actually been dating for awhile, there is a tearful farewell from Ine-san and Fuku-san, and Nozomi gets one extra farewell scene where she gives Ryo a lucky charm that she made a wish on. 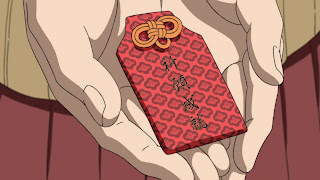 Ryo knows about Nozomi's feelings for him but he refused to let himself be distracted from his quest. What might have been between the two of them is a mystery that may have been stolen by Lan-Di.
At the docks where the ship that will take him to Hong Kong is, the Chens appear to see Ryo off. Guizhang tells Ryo that he will be going with him because they also have interest in keeping tabs on the Chi You Men. Master Chen gives Ryo a letter of introduction to a trustworthy friend that will help him find Yuanda Zhu. As a reminder, Yuanda Zhu is the man who sent Ryo's Father the letter to try and warn him about Lan Di so he is currently his only lead. However, The Great Chai appears again and drops metal rods on the group. Guizhang pushes the others out of the way but gets his leg crushed. 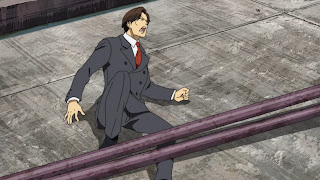 I often wonder what Ryo's journey in Hong Kong would have been like if Guizhang was actually able to join him. But, I can understand the narrative decision behind this choice. 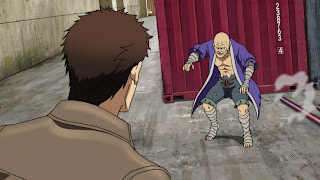 Chai is no match for Ryo and is taken out in two hits. Fittingly, Ryo knocks Chai into the ocean using the leg move that Guizhang taught him.
That was too easy.
Guizhang's leg is bleeding and his Father does not think he is fit to travel. However, Guizhang is insistent that he still go. Interestingly, in unlike the games, it is Ryo that tells Guizhang that he should stay because it is better for him to stay with his Father. Nothing else is needed to be said, they say their farewells and the boat leaves. Sorry, no tornado kick from Tom. 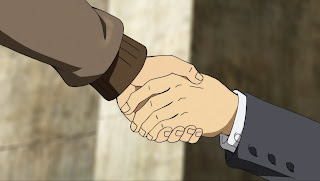 There was deeper meaning behind that. Almost like Ryo was telling him not go through his struggles and appreciate that his Father is still around.
The Chens watch Ryo as he leaves and exchange some words the re-connect them as Father and son. Guizhang quietly thanks Ryo. On the boat, Ryo looks forward with hate in his eyes simply saying "just you wait, Lan Di!". The End!

This episode had way too much to cover within a limited time frame. The final brawl against The Mad Angels was cool but really short and the clash with The Great Chai was over as soon as it started. Pretty much every sub-plot with the other characters had to be wrapped up in a montage with emotional, but short scenes. It is a case of trying to do too much good with not enough recourses.
I am very torn on this. Part of me wishes they have the first game it's own season so that everything could have been paced out and explored properly. But, knowing Shenmue's history of trying to tell a large story only to get denied future releases, I can understand why they would want to get the chapters we already know out of the way fast. There are 8 episodes left that will cover all of Shenmue 2, which was a much bigger game which covered 3 chapters of the plot as opposed to the first game that was only 1. So, this means the duck racing will have to be cut. xD
As for this episode, it is good, but very rushed. But, there is no way they could have spared any more episodes to the first game given that the contract was only for 13. I have no way of knowing the behind the scenes of this, but I am not here to create conspiracy theories, only to give my honest opinion and share what information I do know. This episode could have been much grander, but it did what it had to in order to wrap up Japan and move Ryo onto Hong Kong. 3/5
Posted by Cendoo at 12:00 AM