Green, there is a color with a lot of fans. The Green Ranger has been everything from a 6th Ranger, to second in command, the comic relief, and sometimes just another ranger of the core team. Their Zords often reflect these roles and have some variety to pick from. Now, with this list I have to stress the rules, no 6th or Extra Rangers and the Zords have to belong to Green Rangers, not Zords that are colored green. Anyway, let's click "read more" and let's get the list started.

The Raptor has always been a fine choice to be the bases of a Zord, and it finally happened on the 3rd Dinosaur themed team, Dino Charge. While less iconic than the Tyrannosaurus, it is equally as deadly looking. This Green Raptor has a bite to it and allows for many Rapto Formations for the Megazord. Only issue I have with the design, it looks to much like a praying mantis.

The Galactabeasts I always felt looked pretty stuipid, but their Zord forms are not bad. This condor themed Zord is not just the tiny bird that most bird themed Zords are, it is huge and strong. Oddly enough, it is an expendable component of the Megazord. This bird can play one of 2 roles, either it attatches to the back of the Megazord to allow flight, or it is wielded and used as a missile launcher. A unique role that is usually reserved for Zords not part of the core 5. Although its size is inconsistent, the Condor Galactazord was a tough bird with a cool design. 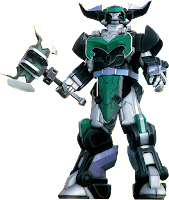 The largest of the Titans from Mystic Force. This Minotaur humanoid Titan (Zord) wields a big hammer and is obviously meant to be the strongest of the group in terms of sheer physical strength given its size and the hammer for a weapon. It is a very straight forward design, the horns and a bulky body just like the Greek mythology stories. A good fit for the magic theme that this Zord belongs too. 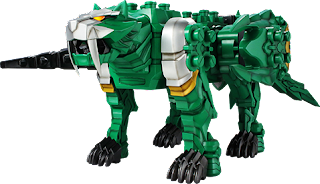 This Tiger is all about speed. While a tiger themed Zord is something that has been done many times already, this was the first green one. In a flash, this beast will slice through monsters and can become a lance for the Megazord. Honestly, I just really like this simple but deadly design. The speed behind the Tiger Claw Zord is a nice compliment to the predator nature of a tiger.

I never thought I would put a vehicle based Zord at the top of one of my lists, but this one was just too perfect of a fit. Joel, the Green Lightspeed Rescue Ranger, was stunt pilot before being a Ranger which already set him up as ideal to pilot the only Rescue Zord that flies. He uses Aero Rescue 3 to perform rescue missions and has a zipline that is used to put the Megazord together. There is even a moment where Joel drops flyers with it to let all the civilians know he is the one piloting it. This is a pick done not for the Zord design but rather how it is used. To bad it couldn't keep it's green color when forming the Megazord's head.
Those were my picks for the top 5 Green Ranger Zords. As always, I hope you disagree so we can discuss other potential picks. If you would like to do so, leave a comment here or join our Discord for some nice friendly chats. Until next time, this is Cendoo the Ghost Ranger, signing off.
Posted by Cendoo at 12:00 AM