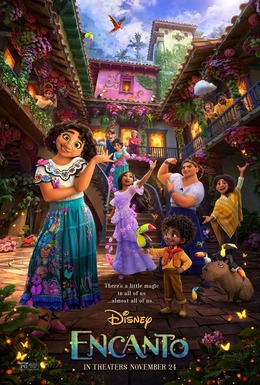 Holy shit! He is doing another review of a relatively recent released film? I can hear you all saying. Well, I really want to commit to the new year with fresher content, and new releases seem like the perfect opportunity for that. And don't worry, the next three articles won't be film reviews but a much more varied variety of articles that many of my readers have become accustomed to, including the return of my favorite editorial series Building Better Backstories.

But until those articles are released, allow me to hold you all over with a look at Disney's latest animated feature Encanto. Available both in theaters and on Disney+, Encanto was a highly anticipated film upon its release and has in the weeks since become a massive presence on the internet due to its very poignant and emotional themes and fantastic music, both of which will be discussed in greater detail below. But is the film deserving of this sudden up swell of popularity that I haven't seen in a film since Frozen, or is the lack of new animated content from Disney artificially increasing the positive input? And how does this film standup compared to Disney films of the past, both distant and more recent?

As soon as I saw this film, I knew that I needed to talk about on Emerald Rangers, as one of the latest "new release" articles that I want to make more prevalent. So be sure to continue reading below to see how I answer these questions.

Encanto follows the lives of the Madrigals, a Columbian family living in a sentient house in town in a magical valley where nearly every member of the family possesses some sort of special ability given to them by a magical candle referred to as "the Miracle". However, there is a single Madrigal who does not possess any special ability, Mirabel. And this lack of ability on Mirabel's part leads to a degree of emotional distance from the rest of the family, especially from the matriarch of the family, Abuela.
But when signs that the Miracle is fading begin to appear and everyone's special abilities begin to act up, it may fall to Mirabel to uncover the dark parts of the family Madrigal and save the Miracle.
***