Oh Silver Rangers, one of my favorite Ranger colors. Unlike gold, there are actually a fair amount of interesting options to choose from, despite only having 10 rangers, plus 1 gray. Almost all of them are memorable, but click "read more" and I will do my best to pick just 5.

The Lunar Wolf Ranger, or just Lunar Ranger. A ranger from the war 3000 years ago. After a pretty tense story arc where he was possessed as the evil Zen-Aku, he is freed and becomes the 6th ranger. At first, he is very distant with the other rangers while dealing with his troubled past, his relationship with the princess, and trying to find a place for himself. Taking the "lone wolf" story to face value. One of the more interesting characters of the season.

Steel is a strange case and something new for a ranger. He is a big brother type of robot who longs to connect with his half human side of his DNA. The overconfident and positive type that serves as a contrast to the gold rangers science nerd-like character,  We have had robot rangers before, but none that had actual human-like ranger forms. A nice change of pace and an enjoyable character. (If you don't cringe.)

Oh yes, the original Silver Ranger. Zhane served as the rangers trump card as he was exceptionally powerful and came to the rescue in grim situations. On top of that, he was a clown who pranked the others and almost dated the main villain. One of the most iconic 6th rangers in history. 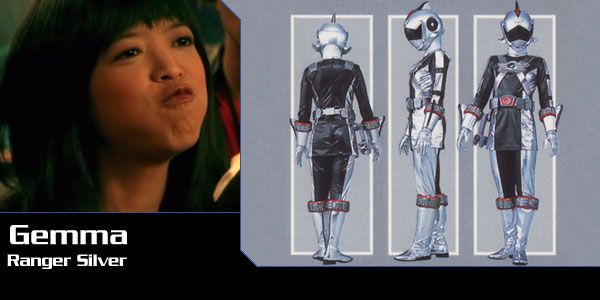 The one and only female Silver Ranger who is just as much fun as her Gold Ranger brother Gem. I'll try not to repeat myself too much from my Gold Rangers list as she has similar personality and traits to her brother. What is boils down too is she is not only iconic, but also super friendly, smart, loves explosions, and is a total blast of a character to watch. Oddly, she is given a little bit more development then Gem and even returned for an anniversary special.

Now here is a historic ranger, the first all original one to never exist in Super Sentai. That alone earns Ryan a place on this list, but his story arc is also one of the best, if not short. Another evil ranger turned good, but this poor soul was kidnapped as a child and raised evil rather than being under a spell. He is also incredibly powerful, taking on 3 monsters at once that the core team lost too. This ranger has meant a lot to many fans including myself. Titanium Power!
Those are my top 5 picks for Silver Ranger. Leave a comment here or in the forums about who your favorite was. Think I should have included Tyzonn, Robo Knight, Orion, Zenowing, or Nova Ranger? Tell me why. Till then, peace out.
Posted by Cendoo at 12:00 AM