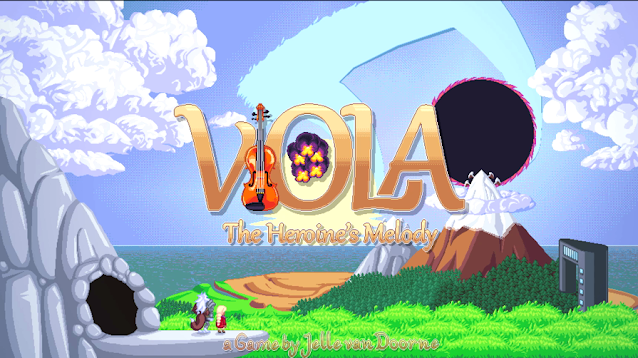 Here is a brilliant little indie title that combines 2D platforming with turn-based RPGs and is music themed. That sounds like a mismatch of genre, but they all work together surprisingly well. Click "read more" for my full review.

The story is a coming of age tell that follows a young struggling violinist named Viola. After repeated failed attempts at playing a song, Viola's violin turns into a blackhole that teleports her to another world called Vynla. 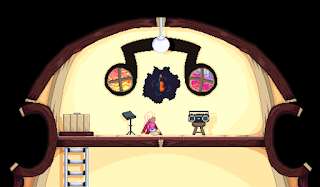 Vynla is a world with magic, monsters, talking animals, and a big blackhole in the sky that is causing a monster uproar. Thus, begins Viola's quest to go home and possibly save Vynla from this blackhole that she may or may not have been responsible for. Not to spoil too much, this is one of those stories that starts out very simple but gradually gets more complicated and is very engaging. While the whole other world full of magic is not the most original concept, it is used very well.
There are several characters you meet along the way and a lot of them become party members. Some of them can come off as overly nice, especially considering Viola is a bit of downer who is the potential cause of their worlds danger.

Amazingly though, no main character feels one dimensional. Every character you meet has their own motivation for traveling with you, go through emotions, develop, and even have drawn out backstories that can be learned by doing personal quests for them. Serious issues are brought up including lost loved ones, discrimination, and regret.
Given this is a one person indie game, it would have been very easy to cut corners and rely on cliché's for writing. But, a lot of love when into creating this world and its characters.

The game play combines two and a half different genre's. Turn based RPGs for combat, 2D platforming for the world, and rhythm game play for all actions done in combat and spells used in the overworld. Whenever you aren't fighting, you have the basic wall jump, and triple jump done Mario style where the 2nd and 3rd jump are not in mid-air but more like bunny hops. Platforming is not too difficult as there are no lives or traps. However, there are chests to be found, a maze or two, and you can sometimes fall down forcing backtracking. Due to this mechanic, traveling outside of combat is actually fun and enemy encounters are not random and can often be skipped by simply jumping over the enemy.

Combat is turn based, but not so simple as to just pick attack. Every action has a little QTE attached to it which fits with the music theme this game is going for. Doing well in these QTEs will increase damage and failing them will caused the attack or spell to fail.

It is a 5 party system with 10+ party members (some of them optional) and all the basics from items, magic, and a special meter used for bigger abilities that fills as you take damage. While there isn't technically a "class" system, every character's stats are spread in a way that makes them fill the same roles from those with high attack but not many skills, those with low attack and a variety of attack spells, middle ground in both, and some who are best in support roles. Enemies have weaknesses and resistance which is basic, but enough give this game a level of strategy so it is not just a mash attack to win.
Equipment is very simplified for this game. There are no new weapons or armor, only gems. Each character has 2 slots for a gem and each gem changes states; most will boost 2 stats and reduce one. These gems can be acquired from random drops from enemies, story moments, or purchased from a shop run by cats. 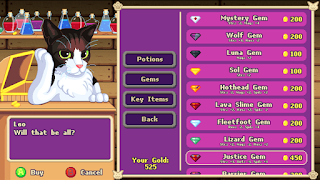 For the most part, the game is linear. However, you can warp back to previous levels and explore extra areas once the correct melody (spell) is acquired or an optional quest is given. These quests are personal quests for party that can be obtained from boosting relationships with any ally by talking to them at a campfire. Boosting relationships and doing their quests allows you to learn their backstory and acquire new skills for them. (I'm getting Persona & Fire Emblem inspiration vibes there.) 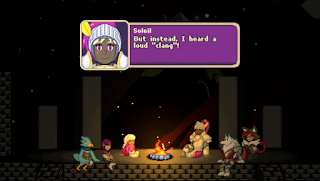 It is a cute system, but flawed. It would be a stretch to say you have to go out of your way to do it besides the personal quests. Whenever an ally has the option to talk at a fireplace, there is no penalty or limit on how many you can choose to talk to and you can just fast travel to another fireplace to gain more options to talk instantly. On top of that, every time you talk to someone it is a guaranteed rank up as there is no dialogue options. As much as I like the bonds idea, it is a little too easy. However, this is probably my only major criticism with game play.
Difficulty is adjustable and the campaign is a decent length so you will get your money worth in enjoyment.

These indie titles never leave a big story with audio since there are usually no voice actors and a lot of stock tend to be used. While that is partially true here, there is no voice overs and sound effects are basic, the music is actually fantastic. This is appropriate considering the game is music themed. Learning new melodies is a big part of the game for progression and every character has an instrument. Nothing else to say but, go listen. 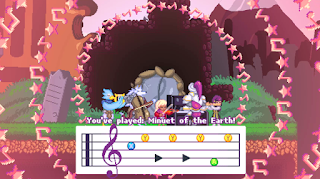 Presentation is, as one would expect from a small title like this, mixed. All the important stuff from the characters to the animations look good, but there are several noticeable corners cut. Various textures are re-used throughout multiple stages, characters don't look too good in close up shot, and many enemies are re-colorings of each other. 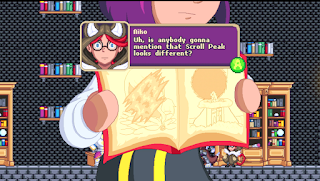 I cannot say I am surprised to see this, or even that bothered by it honestly because I am sure there were limited resources available for the developer. But, It would be dishonest to say that these short cuts are not noticeable. Just something to keep in mind before playing.

Through in through, Viola is a passion project and a great one at that. It is cute, fun, and combines multiple retro genre's very well. I highly recommend it. Given that is whole game was made by one person, I encourage anyone to show support in any way. To this sole developer, keep on doing your thing, hopefully I will be covering another one of your titles here soon.
Writing - 9/10
Game Play - 9/10
Audio - 5/5
Presentation - 3/5