Well, this one feels kind of silly. Just like white and silver, how can one make a top 5 out of 6 to 8 options? Well, click "read more" and I will give it my best try.

This is a strange pick that probably would not make many other lists, but I found this character amusing during an overall bad couple of seasons. While he pales in comparison to his Sentai counterpart, he was full of energy, had talents with zords that the others didn't, and was the only ranger who was not obligated by family to be there. Admitably, not the greatest ranger, but the options are limited.

Solaris Knight. A fairytale story of a noble warrior who was turned into a frog only to be changed back after a kiss from Maddie the blue ranger. He is very serious, tough but fair. The core Mystic Force Rangers were all young and new magicians, so it was a nice contrast to make the 6th ranger older, mature, and a seasoned magician. 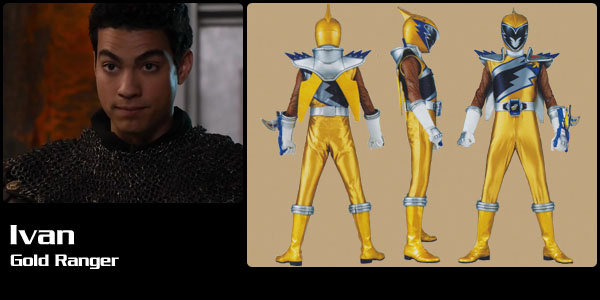 Coming from the one Neo Saban era incarnation that is actually kind of good; we have a warrior from 1215 whose body was absorbed by the villain Fury. He is as old fashioned as a knight can be. Loyal, pure, uses words like "sir" and "my lady", and a fearless warrior who values courage. It is a fish out of water story, not the first ranger to have this role, but it was done well enough to make for an interesting ranger.

Finally, an actual interesting choice. Gem is high on this list for one reason, he is a blast to watch. In more ways then one; this guy, along with his sister Gemma, love explosions and are overly nice. One could quickly dismiss the pair a comedic goofball pair, but they are very powerful rangers on top of that. It is one of those characters that starts as cringe, but grows on you quickly.

I know what you're thinking, this ranger is black not gold. Well, you're right, but it is classified as a gold ranger, the Gold Zeo Ranger to be exact. Originally, these powers belong to an alien named Trey, but they were passed onto the original Red Ranger, Jason for about 19 episodes. His iconic return was a huge shocker for fans and even though he was no longer the leader, Jason still left a big impact. A strange role reversal with Tommy.
That's it for my gold picks. I got to say, this list was kind of upsetting to make due to how minimal effort was put into the bulk of Gold Rangers. Considering it is a rare color, you'd think they would get treated a little more special. Whatever, think I'm wrong about that or that I should have included Levi or Nate? (I don't count Sentinel Knight as a ranger.) Let me know in a comment Remember, Dino Fury's Gold Ranger has not been revealed as of writing this. Till next time, this is Cendoo the Ghost Ranger, signing out.
Posted by Cendoo at 12:00 AM