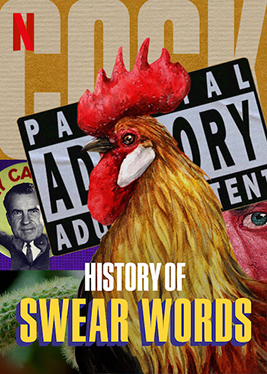 THE FOLLOWING ARTICLE WILL OBVIOUSLY POSSESS QUITE A LOT OF OBSCENITY, EVEN BEYOND MY USUAL AMOUNT.

It's not often that I come across the trailer for a film or series that makes me immediately go, "I MUST WATCH THIS!!!!". For all that I am a rabid viewer of cinema, my past economic difficulties have fostered in me a deep sense of "Wait and see" when it comes to many films, hoping that word of mouth can entice me into making the effort to see a new film. Even in the age of streaming services, where money is less of a pressing issue, the sheer amount of temporal investment (and time is money) into any movie or TV series is oftentimes difficult for me to get over.

So you can imagine my surprise and excitement when I came across the trailer for Netflix's documentary comedy series The History of Swear Words. Watching Nicholas Cage just scream the word fuck for thirty seconds was apparently enough to completely hook me onto the idea of this documentary series. Released on the 5th of January, 2021 The History of Swear Words is one of the first new releases on Netflix for the year and, as you will see in my review, a fantastic way to start this year.

A humorous series of interviews hosted by Nicholas Cage covering the etymology and impact of 6 infamous swear words. Speaking with language experts, comedians, and political experts in order to understand the history of swear words and our relationship to them: from the innocuous words to the most terrible of slurs.
***

Above all else, The History of Swear Words is an incredibly comedic and educational piece, and that last part may very well come as a surprise to many people. As a fan of etymology and an extensive user of linguistic taboos myself, I have always been personally fascinated by the development and evolution of swearing and came into the documentary expecting comedy more than true education. Thankfully the series manages to balance the comedy and education quite nicely.
The series is split into six episodes, each focusing on a specific swear word and its evolution and usage in modern society. Those six words are:
And man is it hilarious to me that I can write those six words in a row and it be totally intellectually excusable. The series relies largely on interviews with comedians giving their personal experiences with the episode's featured swear alongside linguistic experts speaking on the history and evolution of swears. In addition and perhaps most interestingly, the series also goes into how the evolution and development of certain swears reflects the taboos of our modern culture and, especially with regards to the words "Bitch" and "Pussy", how the changing political climates may have a enormous impact on the future of swears.
The series is a delight to watch and I found myself giggling like a schoolboy at some of the uses of language and the absurdity afoot. Nicholas Cage is simultaneously the hammiest of hams yet delivering the series with a level of professionalism that wouldn't be out of place in a BBC documentary. The comedians all relish in the opportunity to cuss as much as possible and even seem to be competing with each other for the creativity and proclivity at which they curse. Even the linguistic and historical experts relish in their opportunities to engage in frequent bouts of linguistic debauchery.
That being said, the series really does possess a level of honesty and good-intentions that I could immediately pick up on. The comedians, for all their tomfoolery, possess an unmitigated respect for the words being used. The series absolutely touches upon the power of these words, particularly slurs and how they can not only harm but also be reclaimed by those who were harmed by them. The episode on "Bitch" was particularly engaging in this regard and the series does a magnificent job on tying the history of this word with the history of feminism itself.
I think that is what truly surprised me about The History of Swear Words. While the series draws you in on the silly premise of exploring the history of swearing. It presents a genuine exploration of the world of taboos and the evolution of societal acceptability through the development of foul language. Nearly every episode in the series, but especially "Fuck", details the power of swear words with regards to black culture and how they have been used to incite civil discourse and public change. The show highlights the inherent connection between those individuals forced into the fringes of society and the language which lies on linguistic fringes.
The History of Swear Words is deeply subversive work in many ways, highlighting the importance and even sophistication of swear words. It focuses on the artistry and raw honesty which underlies their use. Growing up I remember being derided for swearing, being told it was the language of the unintelligent and unsophisticated. This documentary helped me to realize how prejudiced and elitist such sentiments are. Swear words are much like any other form of language but possessing a unique and raw emotional power due to their illegality in "civil" discourse. They have a unique power that should absolutely be respected, but never denied outright.
The History of Swear Words is not comprehensive and I would absolutely love to potentially see a second season of the series covering even more words and how they have derived and evolved throughout history. The documentary is absolutely worth watching and I will most certainly be watching it again very soon.
VISUALS
SOUNDTRACK
PRESENTATION