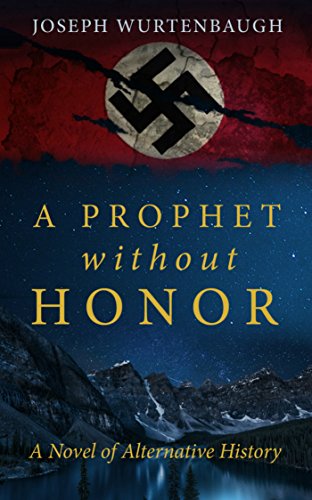 I will be completely honest with all of you. This review was something of a surprise to me. It had not been on my schedule to review until I finished reading it.

While I am a fan of alternate history and will always be ready to sing the praises of a book that captures my attention, I usually find myself drawn to the works of well-known or famous alternate history writers. That is not the case with today's novel.

A Prophet Without Honor was written by Joseph Wurtenbaugh and is, as one might imagine, an alternate World War 2 story. These are almost dime a dozen in the alternate history genre and it takes a lot to impress me; but Wurtenbaugh's outing chooses not only to approach the subject from a new angle, directing the point of divergence to occur at the Reoccupation of the Rhinelands, an operation by the Nazis to reoccupy Germany's western borderlands with military forces in violation of the Treaty of Versailles, but by revealing that approach through a narrative structure that I've rarely seen before in any genre.

The book is deeply challenging once one can engage with the unique story structure and is very poignant to a modern American reader up to date with the comings and goings of our current political climate. The rise and poison of Nazism and totalitarianism is revealed in a way that few books manage to accomplish successfully and it accomplishes this goal without resorting to the "Great Man View of History".

A Prophet Without Honor is quite simply a book that once I finished it, I needed to spread it to everyone else.