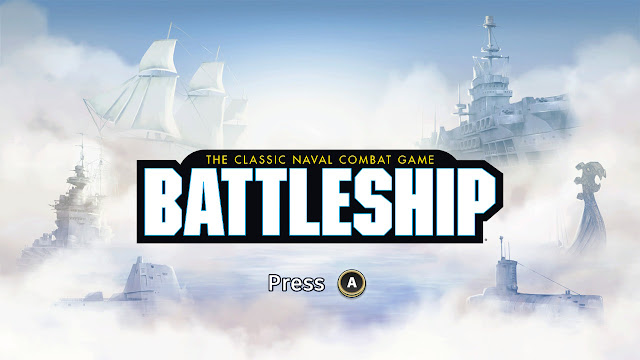 How do you like that, an old favorite board game made into a video game, again. This is the 2018 version, and the Nintendo Switch port to be exact. This is a direct port from Steam and mobile apps. Click "read more" and let's take a look.

There are two main modes of game play, Classic and Commanders. Classic is the standard board game style of Battleship that most people know, Commander is a more strategical interpretation of the game involving spending recourses and different size boards & ships. 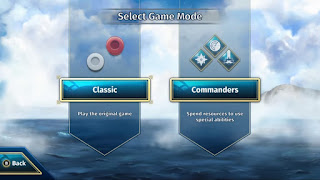 Starting with Classic, it is just the standard game of Battleship where you set up your board with 5 ships and try to guess where your opponents ships are before they guess yours. 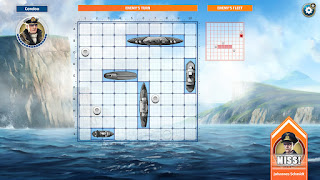 There is one twist, a rule that nobody I've asked seems to know about, whenever you get a hit you get an extra turn. This is actually a nice rule to speed up a game and does not change things as much as one might think.
A player can select between a number of generals and stages, but that does not seem to change anything except what your ships, the background, and your icon look like.

Commanders mode is where these choices matter. Every character has slight differences between them, mainly ship types, and every change effects strategy. 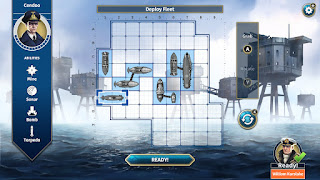 Other then different shapes, the main difference in this mode are the skills. These skills cost action points, arranged from least to most expensive are Mines x2, Sonar x3, Bomb x5, and Torpedo x9. You get 2 points every turn and 1 extra every time your ship gets hit. Mines let you place a trap on your own board if you think you can guess where your opponent will strike; they just cannot be placed on a ship. Sonar allows you to scan all spaces around one of your missed attacked spots. Bombs strike everywhere in a 4 space square, and Torpedo will strike a whole row either vertically or horizontally but will stop if they get a hit. Once again, getting a hit allows an extra turn and standard attacks are free. That being said, different commanders can be unlocked and will have variations of the skills depending on who you choose. These changes allow for a good level of strategy, even though luck still plays a big part.
More characters and maps are unlocked as your rank increases. After every battle, you are given a score based on various factors and there is a list of objectives to complete that will increase your rank. 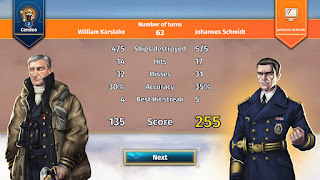 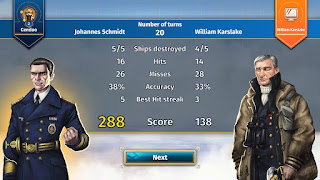 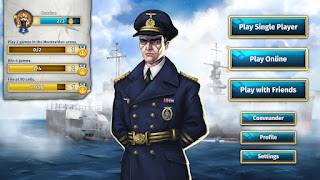 Multiplayer is a mixed thing though. Online works great, no lag and since it is cross platformed there is almost never any wait to find an opponent. Local is terrible. It requires the other person to have a specific app. It is barely local at all with the only benefit being that the other person can play on their phone without purchasing the app. 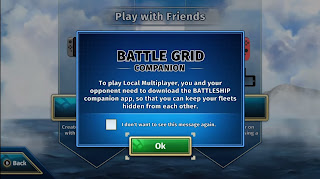 That brings to the biggest issue with this port, the price. It is $20 apposed to $10 on Steam and $5 on mobile Apps. Granted, it does have microtransactions like the app version does, but that's still an issue. Being able to play the game on the go or at home, the Switch has both but cost more then both other options put together. I suppose if your too young to have a phone and really hate PC gaming then there you go, but that is something serious to consider.

Music in this game is sounds appropriate for naval combat, and also overly dramatic in a good way. It is a cleaver way to hype up a simple game like this. Sound effects are exactly what you would expect. You hear sonars, bombs, ships sinking and ext.
No voice acting obviously as there isn't any story. To summarize, the audio does its job with no complaints. Nothing too special, there was no need for anything standout.

Visually, the game is very retro. There is just the basic board game style for the game and the different levels only seem to change the background.

All honesty, it is digital Battleship, anyone familiar with the board game can easily picture what this game will look like. Anyone else, it is a grid board where you place your ships along squares is places that hopefully your opponent won't guess. The only difference with digital is that there are no pegs to mark where you've hit or miss, that's all done for you. It is all bright and colorful and very appealing to look at.

To summarize this experience in one word would be "retro". From the visuals to the game play, it is all very faithful to the original board game with a new mode included to take advantage of the digital benefits. If you are a fan of Battleship and don't already own a digital copy anywhere, I do recommend this title, but not the Switch port. This is for the simple reason of pricing, it is $20 on Switch, $10 on Steam, and $5 for the mobile App and they are all the same game. (Minus microtransactions on the app version.) Steam covers you at home and the app covers you on the go, both together is cheaper then the Switch version that does both. Granted, if you cannot use either Steam or Mobile then fair game, but just keep this in mind. Here is to all my board game video game fans, till next time.
Writing - n/a
Game Play - 8/10
Audio - 3/5
Presentation - 4/5