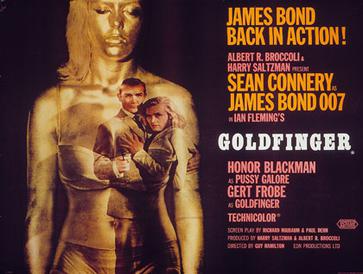 Hey everybody, its time once again to return to our slow review of the entire James Bond franchise. Over the next three weeks, we will cover another two films in the series (with a book review in between) before moving on and taking yet another break to focus on other subjects. This week, we turn our sights to the film that is widely considered among the best Bond films of all time and the one that truly helped make the James Bond franchise into what it is today.

Released in 1964, Goldfinger was based Ian Fleming's seventh novel of the same name. The film in may ways finalized the formula for the Bond films that would follow and has become a sort of benchmark for the franchise. Even if it wasn't the first film in the series, Goldfinger has managed to carve a place for itself with James Bond franchise as the first quintessential Bond films and has become mandatory viewing for anyone, even with it still possessing some of the more troubling cultural norms which were all to common in films of that era, which I will touch upon in the larger review.

But I am excited and do enjoy watching this film so as you can imagine, the review will be largely positive. Let's take a look at Goldfinger, the third film in the James Bond franchise.

Sean Connery returns as James Bond in his third outing, this time Bond is sent to spy on the notorious gold magnate and suspected smuggler Auric Goldfinger who has been manipulating the international gold markets by means unknown to MI6 and the CIA. The two agencies believe that more is afoot and demand Bond find out what he is up to.
In the process of tailing Goldfinger, Bond is eventually captured and learns of a daring plot to break into Fort Knox and steal the United States gold bullion repository. But there seems to be more to Goldfinger's plot then what first appears and Bond will have to deal with his two henchmen, the quiet and deadly Oddjob and the beautiful Pussy Galore in order to stop him.
***