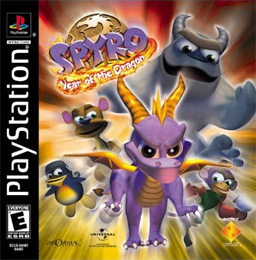 Here is a not at all obscure title, the third Spyro The Dragon game and the last one created by Insomniac Games. One of my personal favorites for the Playstation 1. Let's go ahead and click "read more" for my review.

The story, as the title suggests, is it is now the year of the dragon when eggs are laid and ready to be hatched. However, a  hooded rabbit named Bianca and a group of Rhynocs appear from holes in the ground to steal the Eggs while Spyro, his cheetah friend Hunter (from the second game) and the adult Dragons are sleeping.

Bianca accidentally steps on Hunter's tail which wakes up all the sleeping dragons, but it is too late to stop the thieves before they retreat down the holes. On the other side of these holes, we see Bianca reporting to the main villain of this game, The Sorceress. A blue alligator magic user and the first main female villain for the series.

Throughout the game the story unravels and you learn about the history with the other world, the Sorceress' conflicts with the world and Dragons, and how the Dragon's are the source of the magic in the world. In addition to the main plot, you also meet a large variety of characters in every level with their own clashes with the Sorceress. 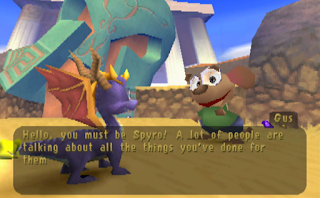 These worlds no longer have cutscenes when entering and leaving which is a disappointment. However, the characters and worlds are still charming.

The story is very simple, but done well and works great. Dialogue is also great featuring very good voice acting and a lot of memorable conversations with a large cast of great characters.

Honestly, the writing in this game is stellar. Any complains would be nitpicks and none of them feel relevant enough to even mention.

If you have ever heard the term "collectathon 3D platformer", this is one of those iconic titles. The main objective is to collect Dragon Eggs with gems being the secondary collectable. Gems are scattered everywhere throughout stages and inside of enemies while eggs are either hidden or awarded from completing various tasks and mini games. Collecting these allows progression in the game.

Spyro kept all his new moves from Ripto's Rage and his old ones. Flame breath, charging, gliding, hovering, climbing ladders, swimming, and the head bash. No new moves are learned in this game, instead there are 5 new playable characters that are used in specific parts of the game.

Sheila the Kangaroo: an Australian Kangaroo that kicks and can jump very high. A slower pace than Spyro, but not a huge departure of gameplay.

St. James Bird. A flying military penguin with homing rocket launchers. A bit stiff in movement from the waddling, but unlimited flight and a strong range weapon can make for some satisfying moments.

Bentley the yeti. Speaks with a lot of intelligence and uses many big words. A very slow character that can barely jump, but the strongest physically. Able to smash obstacles and chests open with his crystal club that any other character would need some mechanism or rocket to do.

Agent 9. A hyperactive monkey with a laser gun and possibly the precursor to Ratchet and Clank gameplay wise. His first level has him in a pretty fun 3rd person shooter style of game, but most of his others make him first person and control badly. One other level is an overhead shooter which is okay. It is strange that his character has an opening level with a lot of mechanics that never get used again.

Lastely, Sparx the dragonfly becomes playable. Not a new character, but no longer just a health bar. His stages are simple overhead shooters and completing them gives Sparx new abilities.

Sparx has one stage in each of the 4 homeworld. The other 4 new characters all have one solo stage and appear in sections of Spyro's stages. Not having one unlocked when encountering their section will lead to back tracking and 3 of the 4 homeworlds have 1 stage each that is impossible to complete 100% due to this backtracking because the needed character is not unlocked until the next homeworld. Luckily, when returning to past worlds, they do not need to be completed all over again. 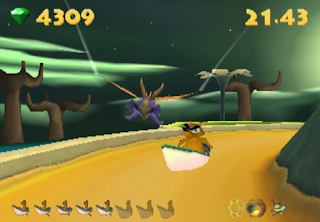 The speedways from past games also return. There are 4 in the game and they have the same time trials where you need to flame all of 4 different objects within a time limit, but there are also races now. Interesting it took till the 3rd game to included races in a "speedway" level, but now they are present and completing them earns another dragon egg. In addition, Hunter is hidden somewhere in each speedway and finding him lets you play a minigame in control of Hunter to earn another egg. These minigames are arrange from a ring trial to a rail shooter. Simple and quick.

One last thing worth mentioning is the big new feature this game brought for Spyro, skateboarding. 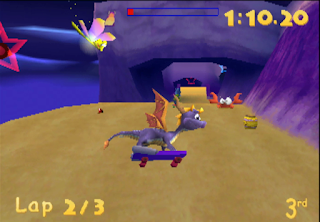 Possibly due to the popularity of Tony Hawk games at the time, Spyro now sports a skateboard in 4 levels. At first he does tricks to earn points, but the second 2 stages become a racing game. Doing tricks builds a boost meter to help you win. This was one of my favorite parts of the game, but it is not for everyone.

That last statement is a good way to summarize the gameplay. Collectathons are not for everyone, but to those who enjoy them, this title, as well as its' two previous entries, do the formula to near perfection.

The voice acting in this game is great. Tom Kenny is back as the voice of Spyro and does a great job. Hunter and Moneybags have new voices which I find to be improvements over how they sounded in Spyro 2. Also, the various characters both plot important and the smaller roles in all the different worlds have unique voices that give them personality. Truely a fine example of voice acting done right.

The soundtrack is also very enjoyable. Every homeworld and level has their own song that fits each one great. However, it is worth mentioning that the original release of this game featured an incomplete soundtrack. (As well as one missing cutscene.) Later on, in the "greatest hits" edition on the PS1, they fixed these missing elements. Sadly, the PSN release of this title features the incomplete release. So, do any true fan, I recommend looking up the black & white "greatest hits" disc or PS1.

Graphics are bright, colorful, and lively. No two levels look the same and most of the characters are unique as well. Granted, every character in the same level look the same with maybe 1 exception and there are a couple cases of reusing animation.

It's debatable as to how well the visuals held up. But, I still find them very appealing and for the time it is clear that a lot of effort was put into them. 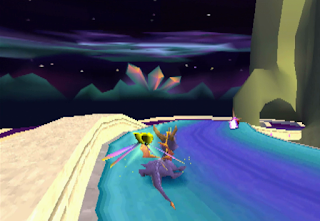 Overall, this is still a great game and one of my favorites for the PS1. There are plenty of people that argue about whether or not it is the strongest among the original Spyro trilogy; but as a stand alone title, I can have fun with it no matter how many times I beat it. If you are into 3D collectathon platformers and somehow missed this very popular title, then definitely check it out. Looking back on it, it is almost depressing to play again because the franchise never peaked like this again until the Reignited Trilogy. A fond memory in gaming history and one I will never forget.