Time for some magic with this 2005 Super Sentai season about a family of mages. Yes, all the core rangers are siblings. Mahou Sentai Magiranger or Magical Squadron Magicranger and the origins of Power Rangers Mystic Force. I don't know much about this one so, click "read more" and let's find out more.

The episode begins with a student kicking a soccer ball and accidentally bumping into a little girl causing her to lose her balloon. Then, out of nowhere, the episode transitions into what looks like a trip to the underworld. 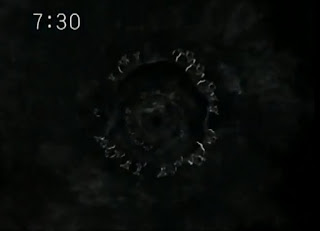 We see a bat monster flying down a tunnel that takes us to what appears to be the villains base and we learn the names of some of the main villains of this season. 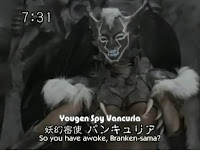 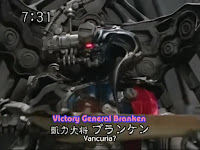 There little exchange tells us a couple things about the villains; they are called Infershia, have recently awoken, and plan to invade the surface world. Sounds like a bug infestation theme. At the end of this rally, we get our first look at this season's evil ranger before cutting to the intro. 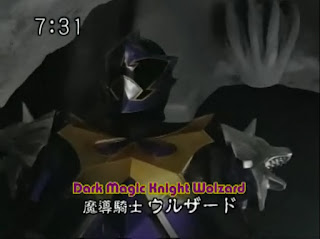 One theme song later, we arrive at the Ozu house where all the soon to be Magirangers live. Yes, in this season, all of the core rangers are siblings. We see all except Red, who already left for his school's soccer club, sitting down to a family salad dinner with their Mother. 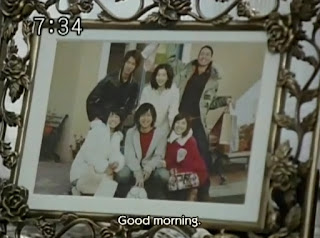 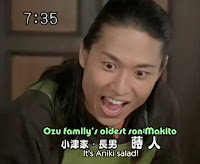 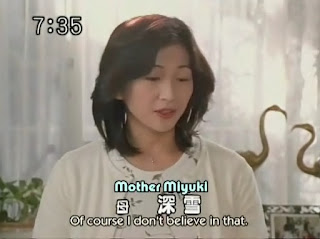 Honestly, I am digging this twist. Sure it means there is no chance of a core ranger romance, (I hope), but it puts a new twist on the Ranger's relationship.
Eventually, the TV gets turned on and see a news report about a boy climbing a flagpole dangerously. The whole family is shocked to find out that it is Kai. 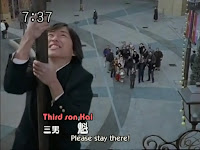 The Red Ranger is the youngest of the siblings/the baby of the family? That is going to be one tough leadership role to demand respect in.
Turns out, Kai was that soccer player from the beginning of the episode and was climbing up to get back the balloon he made a little girl lose. Amazingly, Kai manages to get the balloon and parkour his way back down without hurting himself and the Mother of the little girl thanks Kai instead of calling him stupid. Luckily, Kai's family show up to give him a semi-proper scolding after dragging him away from the news team. After this, thr Ozu family walk home while discussing whether or not Kai was in the wrong, when all of a sudden a magic circle appears underneath them that a monster appears from. 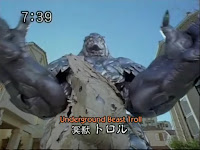 Mother seems familiar with this circle.
This troll monster does a tiny amount of smashing while chasing the Ozu family. However, Mother Miyuki turns around to face the beast as it seems she expected it. Then, she pulls out a MagiPhone. It's henshin time! 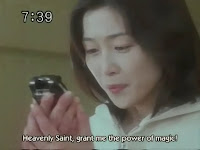 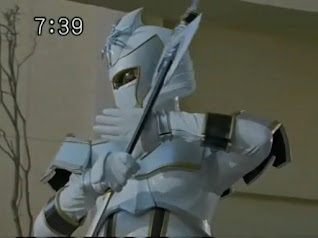 Miyuki henshins into MagiMother and proceeds to face the troll. The troll while all the kids are shocked. The troll throws a CG car at Miyuki only for her to magic it away. Then, Miyuki freezes the troll, snaps her fingers, and the monster shatters ending in the Magiranger's first victory.
Back home, Miyuki shows her kids some more magic. Also, she explains that the troll was an "Underground Beast from Hades Underground Infershia", or a literal monster from Hell. To fight them, Miyuki was given magic from the "Heaven Saint." Now, Miyuki casts a spell that gives all her kids except Kai a mage outfit and necklace.
Heaven vs Hell. The things they get away with in Japanese children's shows.
They also get cloaks and their own MagiPhones. 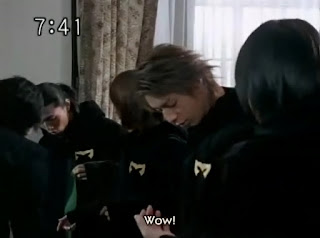 Doesn't take a genius to guess what will happen next.
They are officially classified as Mahou Sentai Magiranger and Kai is upset that he is left out. However, Kai is ignored when Miyuki's MagiPhone picks up trouble. Miyuki sends the 4 older children to fight but cannot go herself because she senses something very strong and evil and needs time to build up magic to face it.
A convenient excuse to keep the focus on the core team.
The 4 are frantic and hesitant to go so suddenly, but Miyuki encourages them and they go. Finally, Kai is answered, simply because he is the only one still in High School, Miyuki thinks he is not ready to fight.
I would say that's a fair point. But, has she not heard of most of the last 28 teams?
There is more to this decision. Kai's balloon stunt made Miyuki believe that he is too reckless to be trusted with a fight that could kill him. Also, courage is necessary to use magic and Kai's recklessness is not the same as true courage and those with no fear cannot have true courage. Kai gets frustrated and storms off.
Much better point. This concept of being "fearless" or "flawless" have a drawback will return in later seasons as well.
Cutting away to the battleground, we get our first look at this seasons grunts. The Zobils. 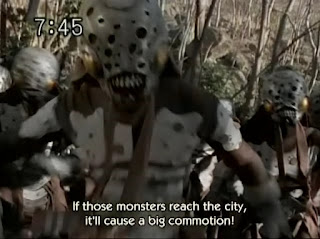 Now, time for 4 of the core Rangers to henshin. Here we go again.

Personally, I think Mystic Force did the change sequence better.
The Rangers all do their role calland poses and the battle begins with Kai watching from the bushes. This fight shows off the 4 Magirangers weapons and special abilities. Everyone has a wand or "MagiStick" and does magic that matches their colors; Green's MagiStick turns into an axe and he has power over the forest, Blue does water magic, Pink with wind, Yellow with Thunder and a crossbow. Since it is magic themed they can get away with more silly attacks like MagiPink turning into a fan to blow away the enemies. Also, a few catchphrases are thrown around like the Rangers saying "checkmate" and snap their fingers after winning a struggle and Tsubasa never being in the mood to do stuff but does it anyway.
Now, the grunts are defeated, but the great evil that Miyuki senses has appeared. It is Wolzard. Wolzard sees Kai first, but ignores him and attacks the other 4.  It is also revealed that Wolzard is also a wizard like the rangers. 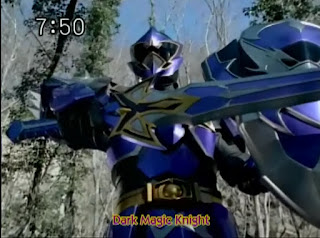 Unfortunately, it appears the 4 Magirangers are no match for Wolzard as he literally one shots them. Kai comes to the realization that he must save them, but he is too scared to move for the first time. Wolzard says there is only need for one magician and is about to decapitate Makito. However, Kai finds his courage, kicks a can at Wolzard, and runs in to try and help. Miyuki senses this new courages and magics the powers to Kai. Now enter MagiRed.

Stuff happened. His magic is obviously over flame.
Kai defeats some more Zobils that appear from nowhere. He turns one of them into a soccer ball and uses his soccer skills to defeat a bunch in a silly way. His MagiStick becomes a sword for a more traditional few moments of fighting. Then, he show off a move where he basically becomes a fire bird. All the while, the other 4 rangers have still not gotten up and are just watching in shock. 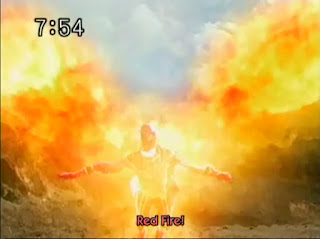 Got to say, it is a little anticlimactic for Kai to overcome his error so fast and just instantly become the most formidable fighter. It is a good resolution but really needed more build up. Maybe a two parter like Mystic Force did with Nick.
Wolzard gives the old beware, until next time, speech, then he summons a horse, turns giant, and fuses into a centaur.

This episode was interesting, and felt like something different among typical Sentai seasons. The family of mages is not an overall original concept, but a first for Super Sentai and the family dynamic for the rangers should prove to be an interesting concept. There was only one real issue I had with this episode, and that was the Red Ranger Kai. All the other characters did not get much development yet, besides general personalities, but Kai it felt like he was meant to be the main focus. It was not a bad concept, the young reckless one who needed to grow past his arrogance in order to join the team. But, the problem is he never got any real consequence for his recklessness; in fact, he was practically rewarded for it. Also, how was he so competent with his magic on the first try?
Despite that one big issue, as the whole the episode was quite enjoyable. It did enough to make me want to check out the second half of this two parter opening. Hopefully, the Rangers get developed better and Kai matures. 3/5
Posted by Cendoo at 11:59 PM