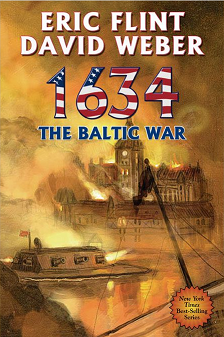 Looking at the analytics for my various articles, my book recommendation tend to be the least viewed of all of my article formats (though given the usual content of the Emerald Rangers, perhaps that isn't too surprising). In truth, these book recommendations are designed more along the lines as a passion project, where I get to promote some literary properties that I might not otherwise get to do.

The fact that my book recommendations also tend to be the easiest articles to write and be very brief and succinct is also not a bad reason to continue them, though I do hope that more people will check out some of the series I recommend and review and come to appreciate them as I do.

Which brings me to 1634: The Baltic War. I've made it no secret of my absolute adoration of Eric Flint's Ring of Fire series. The fantastically detailed of world-building built around countless well-grounded characters and a truly unique and strange point of divergence make it both inviting for new readers and very memorable in terms of its dedicated fans, with many people having favorite story threads, characters, and arcs.

In this particular field, 1634: The Baltic War is my favorite book in the entire series. It is the culmination of baseline trilogy that forms the narrative core of the every other book in the series. After 1634: The Baltic War, the 1632 series would begin to diverge into its countless varying story-lines and character arcs. As such, The Baltic War serves as a conclusion to the old model for the series and the introduction to how the succeeding books will work from thereon out.

1634: The Baltic War is a direct continuation of the plot from 1633. Following an attack on the city of Luebeck by the Ostend League - a coalition of European nations bound only by their opposition of the alliance between the Swedish Empire of Gustav II Adolf and the city of Grantville, a city of time displaced Americans from the year 2000 led by Mike Stearns - the confederation of thousands of princely German states, including Grantville, has found itself unified under a new sense of national identity and pride into the United States of Europe, with Gustav as Emperor and Mike Stearns as the new Prime Minister. This brand new superpower finds itself surrounded by enemies on all sides, led by France and Denmark.
Our story follows the lives and struggles of numerous characters both historical and otherwise as they deal with the consequences and fight through this final stage of the Thirty Years' War. From a Danish Prince who is both working to defend his homeland and befriend an American POW (who is also trying not to fall in love with the Prince's step-sister), to the commander of the USE's newly founded ironclad navy racing to complete his fleet in time to stomp the forces of the Ostend League on the rivers and seas of Europe. Along the way, we will follow Mike Stearns as he not only leads this new nation through its first great trial but also plans and schemes for its democratic future in a world where monarchy is the law of the land.
There are also several other coinciding storylines that help to make this comparatively short book incredibly dense, including a daring escape from the Tower of London by the American diplomatic envoy, to the story of a romance between a German soldier and an American therapist who has become attached to the Crown Princess of the USE.
These aren't the only plot threads that we follow, but they are the major storylines which form the backbone of the overall conflict and resolve many of the remaining story threads from the previous two books in the series. The other plot threads are begun in earlier anthologies and continued in future novels, which would later develop into specific region-based plot threads. And it is this structure that makes 1634: The Baltic War such an engaging read and the point at where the rest of the series truly comes into focus.
1632 and 1633 are, in many ways, standalone novels that maintain a fairly regular and traditional narrative style to them, with plot threads from one book leading directly into the next, with only a few anthology short stories from Ring of Fire and Grantville Gazette I providing additional context (though both of these can be read after the fact just fine). 1634: the Baltic War introduces us to plot threads or hints at events that are never covered in the pages, giving the reader hints at future fun. Or we might hear mention of something happening just out of range of our main characters, with only the promise of a future story to fill in the blanks.
But rather than leaving the book feeling hollow, it helps to create a world that truly feels lived in. Our characters aren't the centers of their universe, things happen without their input and they often find themselves reacting to things. It really is refreshing and when coupled with a much more balanced sense of power between the futuristic Americans and the downtime European population, you really don't have the same level of "America, Fuck Yeah!" that the original 1632 had in much greater abundance, which is immensely important to me.
Our protagonists don't always win and while you will always root for the Americans, their enemies are given their moments of triumph and very few are actually truly, irredeemably, awful. It's all a matter of context and situation that our characters find themselves in opposition, much like any real war, and it grants a level of grayness and complexity to the world that is only heightened in future installments.
1634: The Baltic War is a sheer blast of action, drama, good humor, and fantastic characterization. The world feels truly real and grounded, even in the series most technologically incredible moments. Like the rest of the series, The Baltic War never forgets that it is, at its core, a human story and it is in that mindset that Eric Flint and David Weber give us one of the most entertaining and impactful stories in the entire Ring of Fire series. Nothing is the same after The Baltic War and it expertly sets the stage for all future works to be built upon it.