Wait a sec?  Didn't I review another runner game not that long ago? Drat! Yes, I did.  Meaning that I can't re-use my same hack-cliché intro about introducing a runner game.  Well this puts me in a pickle.  How am I going to introduce todays review?  Oh! I know! This is your captain speaking.  Today on my review cruise we've got a neat little indie title for you.  This is Run or Die for Steam.  There! That should be hack enough to fulfill the intro section.  (Click on "Read More" to read the full review.) 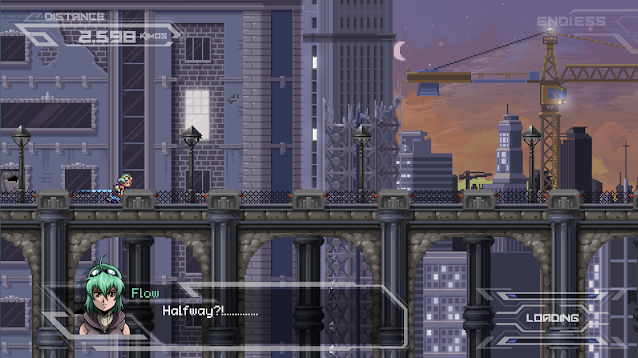 In a dark, dystopian future, a young woman named Flow (who can also be given any name you want) wakes up with the biggest shock of her life.  She has a bomb attached to her.  There is one person that has the skill to remove it, but sadly he is five kilometers away.  Now she is on the run for her (literal) life.  It won't be easy for her, but it sure is better than doing nothing. 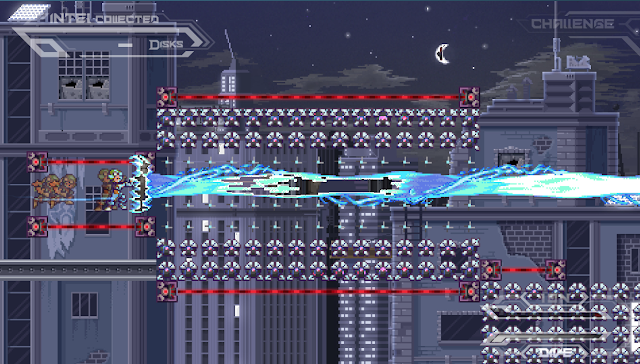 No! No! No! It's not a clone of the classic game, Canabalt.  Other than the city theme and that this game being an infinite runner, Run or Die is a completely different game.  The levels have a few different paths to run though.  Flow also has special powers thanks to a device given to her by The Doc.  (The same character that she is running to.)

The powers system is this games main feature.  These powers are needed to get past certain obstacles like baddies, pits, and laser-beams.  Flow can use this system to jump high, fire a massive power beam, smash though things, and even disable lasers.  The cost to this is that she only has two powers at the time and they'll change when reaching new levels.

This system is quite clever and adds a lot of challenge to the game.  I wouldn't worry about this game giving you a challenge that requires something that you don't have.  This game gives you everything you'll need minus the skill.  (That's where you come in.)

The levels are somewhat randomly generated, but not fully.  All of the levels are pre-made but the order that they'll appear in will be randomized.  This game does become quite difficult not very far in, but it's also very fun and I did enjoy replaying and besting my previous score.

Don't worry, you will reach the Doc if you get in far enough, but that won't stop the game.  Nor will it stop you from wanting to replay.  The levels are super fun and the controls are incredibly smooth and responsive.  If you get bored with the main mode, there's a few extra modes such as a Daily Run and Challenge modes.  There's also more characters to unlock giving that extra incentive to replay.  Granted, the characters are nothing more than re-skins, but it's still a neat thing nonetheless. 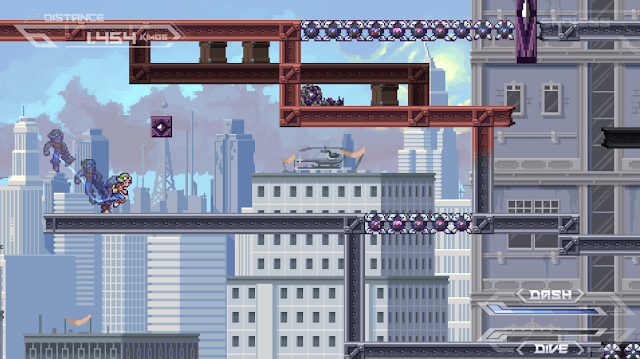 2D pixel art is the choice of graphics for this game and it looks very good.  You've got a dark, gray city mixed in with a beautiful sky.  The sky will change between levels going from night to day and back again.  It gives this game a lot of life.  The main character is both awesome and beautiful, but the pixely outline surrounding her can look a bit off in some frames.

Animation is quite smooth and looks good.  There's a decent amount of frames in each move, which won't effect most of the character reaction time.  I say "most of the time" because the beam attack has more frames of animation than the rest, meaning that you should use this move slightly earlier than you would any other. 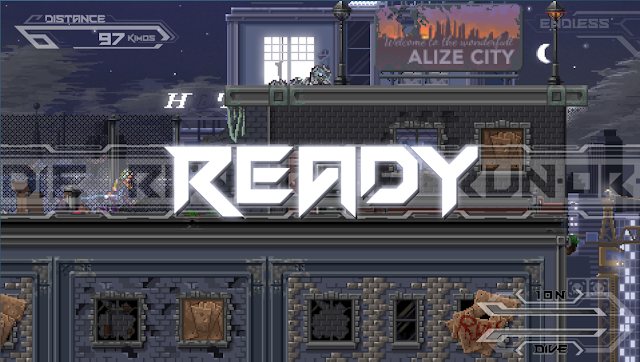 For a game about a very intense situation, soundtrack is very chill.  You get a nice relaxing techno soundtrack that went along with the game and atmosphere very well.  This is also great as I typically rage with these kind of games, so having something to keep me cool is a great move. 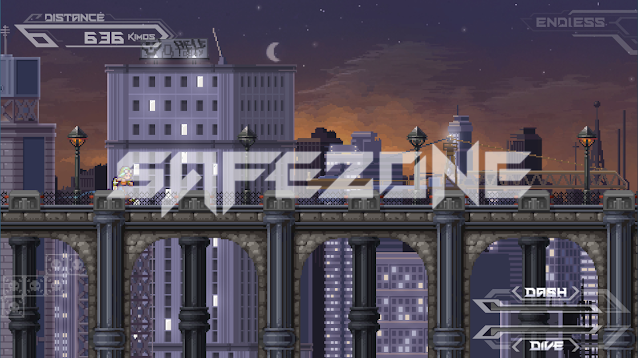 Overall, nothing much to this game, but that doesn't stop it from being a really fun experience.  It's one of the better, less cliché infinite runners.  It's worth a play.  7.2/10

Posted by Retrokaiser at 9:30 AM