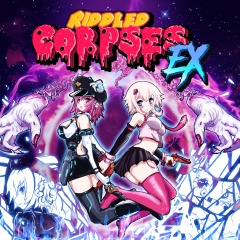 Sexy women and the undead is a bizarre blend that works about as well as peanut butter and jam.  Meaning that it works much better than what it should.  People love sex, people really love violence, and combine that with retro game graphics.  Well, you've got something that's potentially entertaining.  This is Riddled Corpses EX and this is your captain, James T. Kaiser speaking.  All aboard the review cruise ship. *TOOT TOOT* (Click on "Read More" to read the full review.) 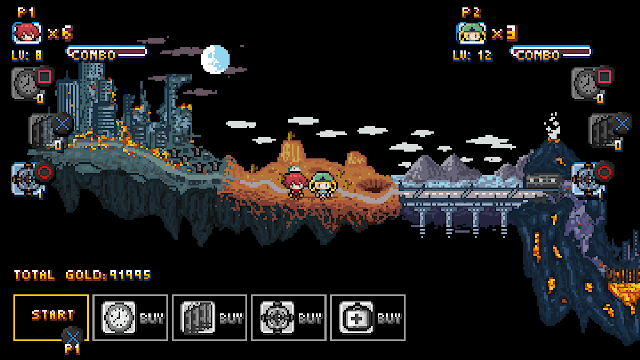 The dead have risen from the grave to feast on the flesh of the living.  A group of sexy survivors armed with guns are out to shoot up all the zombies.  Turns out it's not just zombies, but all hell has broke loose.  Yup, they also have to battle demons and big ugly monsters.

Turns out this is caused by a group of scientists that happen to re-activate the brain of a super evil demon lord.  It's a very dumb story and wouldn't work if this wasn't a video game or a B movie.  It works very well in this situation. 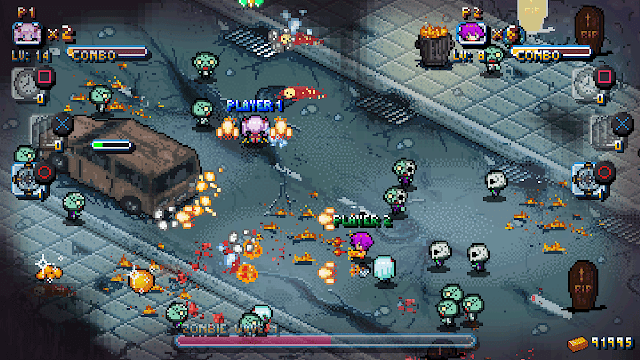 What you get here is a top-down, side-scrolling, twin stick shooting, run 'n gunnin', screen packing, evil exploding, 2D arcade styled game. WOOOOOOO! *Struts* *Falls over* *Figure Four Leg-Locks*  That's a lot to digest when you read what this game is. When you play it, it's anything but complex.  It's a simple game where you must get through levels by shooting things that are out to get you.

The level structure is simple, you'll be traversing through them trying to reach the end. However, there will be pit-stops in the form of waves of enemies.  Get through a wave and move on.  There will be baddies that will spawn in-between waves, keeping you on your toes.  Each level has a small amount of waves, although they were well portioned and made the levels seem larger than how they appeared.

Different kinds of evil baddies will spawn up.  You've got grunts that will charge at you and they don't require much to shoot down.  You'll get big brutes that are slow, but have lots of health. Plus there are projectile throwers that are annoying to deal with.  They will spawn in coffins and you can run through the coffins to destroy them, preventing the baddies from doing damage.  They don't stay in them for long, so you've gotta act fast.

Battling the legion of hell can become very tricky, especially when a lot of them spawn all at once.  You'll just get swamped if you don't handle the situation correctly and this lead to a lot of annoying deaths. Time-stopping and explosive bombs can spawn on the field and I found them to be a godsend.  Sadly, not all these items are effective against the baddies.  Some won't go down with an explosion and others are immune to time stopping.  Another handy item was the extra life.  They don't appear all that often, but when I saw one, I rushed for it.

This game isn't cruel enough to make you shoot at things until the item you want pops up.  Stages have objects like explosive barrels and electric fences that will greatly help you on the battlefield.  They also got very, very, veeeerrrryyyyy annoying to deal with in certain levels because some of these objects can also kill you.  There's a car level where this happened to me a lot of the time.  So there I was going full blown commando only to run into an electric fence while not paying attention. It happens.  It sucks.  I had to deal with it.

A big evil boss will appear at the end.  Fighting a boss with a fresh set of lives is one thing, but by the time you get to one, you'd typically be drained of most of your lives. This makes the bosses more difficult, because if you did fight them with full lives, they aren't very hard.

There's a few modes in this game including: Story, arcade, and survival.  The difficulty in story mode is quite tough.  However, this isn't a mode that requires pure skill to beat.  The characters can level up and with each new level the character gets a stronger gun.  You can level yourself up and unlock things by collecting and spending gold that appear on the stages.

My problem with this system is that it requires you to grind, grind, grind until you are the perfect level to beat a stage.  You can try winning while under leveled, but your gun won't be able to mow down enough baddies and you'll just be swarmed.  Even when you do reach the right level, mild skill will be needed and that's when this game starts to feel like a game.  This mode will save between levels, so if you need to grind for gold in any level that you have beaten, you can do so.

One other key change in arcade is that it adds in items that'll give you points to add to your score.  You can buy items in between stages, just like in story mode.  You are going to need these as in order to beat this mode, you'll have to play all the stages on one sitting.  Yup, no saves.  This is quite the endurance indeed and will be the biggest thing that'll scare off players.  Such a shame, as this mode is super fun and this is how the game should've played to begin with.

Lastly, if you are a huge fan of fighting baddies, you can play survival mode.  In this mode you are on one stage where you fight waves upon waves of baddies.  Each wave is more tougher than the last.  I did have fun with this mode, but playing it once was enough for me.  Didn't have the same charm as what the regular levels have.  It missed the exploration and adventure. 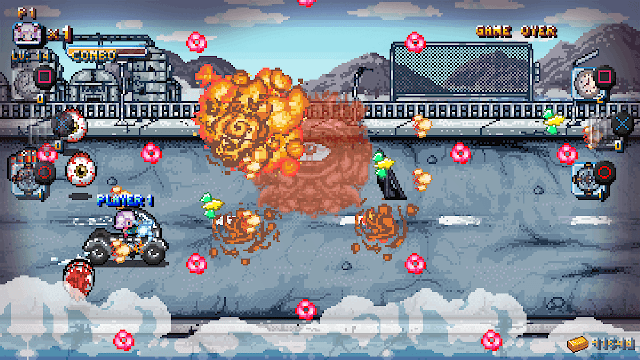 The first stage looks great with it's isometric view, vibrant coloring, and it's huge thick atmosphere.  After that, the style takes a huge dive with levels that aren't full of as much life and detail.  It still looks fine regardless and I just love how it is all super pixely, but not so much to where you can't see anything.  It gives this game a really interesting style.

The characters are small and cute, while the baddies are gruesome.  Heck! Some baddies are just plain disturbing looking, like the skull dogs and the huge bosses.  I did like the variety of what supernatural creatures were used, although I did find some of the gargoyle baddies to be boring looking.

Animation is decent with a lot of movement, bullets, and explosions.  None of it slows down, nor could I see any corner cutting animations where a character moves a bit more jank than another.  It's consistent and I like it. 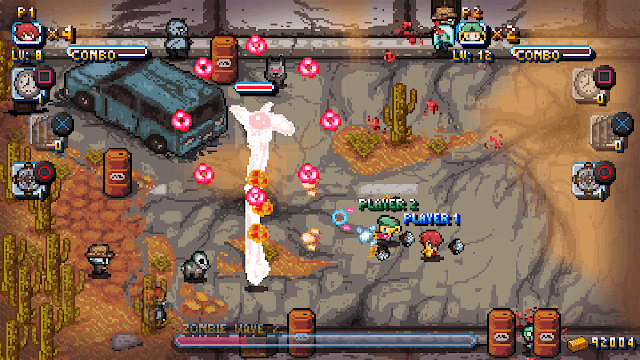 Soundtrack is really good.  I liked how it uses retro gaming sounds to create a soundtrack that's exciting and fun. It's not quite 16-bit nor 8-bit, but a weird amalgam that uses BITS from the two.  (ha! ha! ha! I'm such a pun genius.)

There are two variants of the soundtrack: The old version from the original release and one made for this special EX edition.  They both use the retro game sound, but they do sound different from one another and were both fun to switch between. 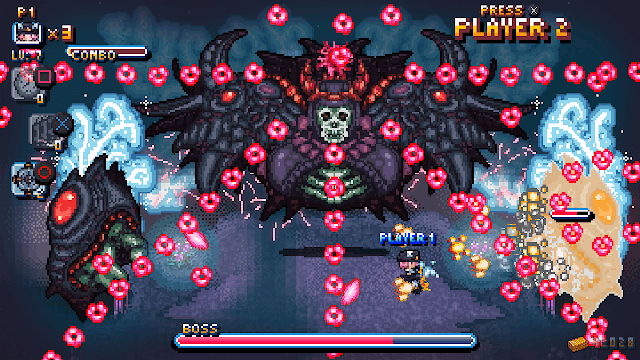 Overall, Riddled Corpses EX is a neat little neo-retro throw-back to classic top-down twin-stick shooters.  It's also a very flawed little game that could've been less of a grind-fest for leveling up your character.  In the end, check it out when it's cheap.  Six point nine out of ten.  6.9/10