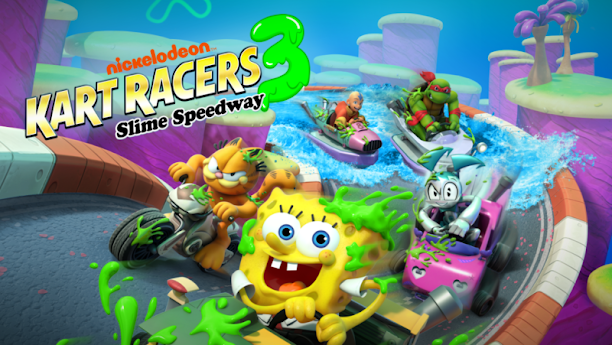 Nickelodeon Kart Racers 3 - Slime Speedway has just hit the shelves...or digital wallets. Whichever you prefer, in this latest installment of the Nickelodeon Kart racer series.  It's certainly been a rough and rocky road (I'm on fire today) for the Kart Racers franchise. The first game of the series came out in 2018 and it was very underwhelming especially for an officially licensed Nickelodeon game. It was no Nicktoon's Racing, that's for sure. It felt like just a console port of a mobile game with bland graphics, boring music and no character voice acting yet somehow they still managed to release it.
Nickelodeon Kart Racers 2 was the next attempt. Coming out in December 2020, was a very big improvement to the first game. I actually enjoyed Nickelodeon Kart Racers 2 a lot. More than the 1st one. But sadly, physical copies of the 2nd one seem to be hard to find, despite the 2nd game being much better than the 1st. But the 3rd game takes the stage to a whole new level.

The full list of characters for Nickelodeon Kart Racers 3. Yowza!
Gamemil Entertainment have certainly become quite the reputable company over the years. I think it's great that they have been listening to the fans as of late. In 2021 they released the Super Smash Bros style brawler Nickelodeon All Stars Brawl. Though the game got mixed reception at launch it's evolved into a pretty decent competitor to Smash Bros. but with Nickelodeon characters. Now with fully voiced characters and even free DLC. It's a shame some people stopped playing it, I really liked All Star Brawl. It's fun to play in short bursts, but I think they did a solid job with the game and the character models were really good.
Now back to Nickelodeon Kart Racers 3. This is what i'm meaning to talk about today. GameMil have really improved this series from the first game. Now every character has character voices from the start, many reviving their original voice actors. For me it's a thrill to see Carlos Alazraqui return to voice Rocko again and to me that's worth the $90 price tag alone that I paid for for the PS5 version. Unfortunately there's none of that fancy schmancy haptic feedback support but it still controls very well and smoothly. I really like how it feels. 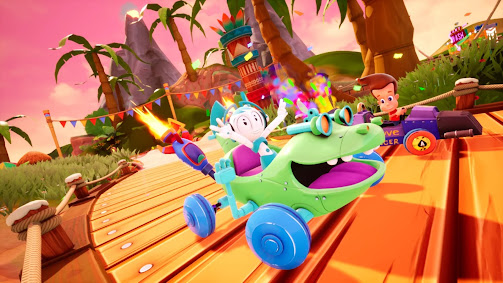 All aboard the Reptar Wagon!
There are about 35 tracks in the game, all based on Nick related shows. So far my favourite track is Hilwood, the town from Hey Arnold. You go through the whole town rather than a looped track. I love these kind of tracks. They had also been doing these for Mario Kart 8 lately too. Some returning tracks from Nickelodeon Kart Racers 2 also make a comeback, which is nice. I previously liked the Saharah stage in the 2nd game and glad to see it back on the new one. At first I was disappointed that some older stages were returning but it really doesn't take up too much of the game. So that's nice, as newer tracks are moreso focused on.
One thing I found difficult was the indication of track arrows. Sometimes they are too far away and you only notice them until you come up to them. Some of the turns are really tricky. So that kind of makes the game more difficult. It really doesn't matter. I have been having more fun with this than Gran Turismo 7, at least.
It's nice to see that even some newer cups from shows are popping up into the game such as Kamp Koral and The Patrick Star Show (Hey, I actually like the PSS) ... not so much Kamp Koral. But it's cool that they're keeping up to date with the franchise at least. 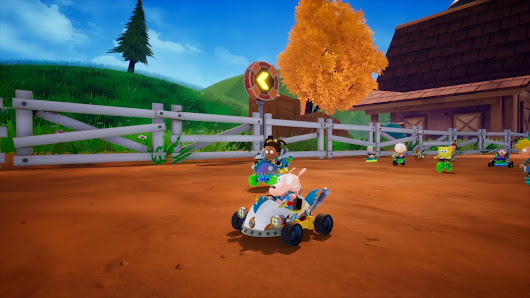 Hearing Carlos Alazraqui play Rocko again is most certainly worth the $90 price tag
There aren't very many extras in the game despite there being a Extras menu option. It only had credits, tutorials and a few other useless options. There is a local multiplayer mode and a online mode that supports up to 12 players.
It's great to see a lot of the original voice actors coming back to voice these characters. However is that Tom Kenny as Dog because it sounds like they just brought out some guy from the office to voice him. Either that or his voice has changed over time and sounds too low.
The voices do provide a great charm in the game that the other 2 in the series lacked. Although the 2nd was a major improvement both graphics, gameplay and music wise. I find the opening cinematic to NK3 very annoying, as there's no dialogue, it's just everybody going 'ugh', 'oof', 'ahh' etc. At first it made me wish the cutscene had no opening voices.
But the gameplay chatter in between is very fun and amusing. It doesn't get so annoying and nice to hear them do some throwback quotes to their shows as well as providing new lines to some of these classic characters. 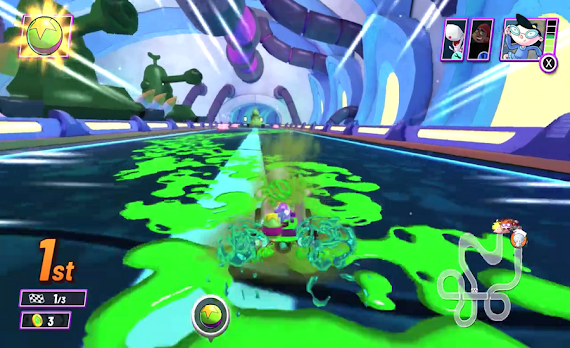 Screw Splatoon 3, i'm playing this instead
Although i've been noticing this game has been getting average reviews online. I really think this is the best one. You should give it a chance. It's fun to also look back at the other 2 games and see how the series evolved. If you know me personally you know i'm big on the classic Nick shows I grew up watching in my childhood. A lot of them are in this game. They have been brought back to life. Sometimes it takes Nickelodeon a really long time to reboot a show, but at least we have all of them at one place in Nickelodeon Kart Racers 3. The levels provide a fun sense of Crash Team Racing-like gameplay, which is something I am fine with.
If you also enjoy the classic Nick shows, check this one out. I hope that in the future Game Mil continues to support this game. Maybe add some new tracks and characters or modes. I would trust them in the future with more Nickelodeon games if any more were to be made. Which I hope there will.