In 1981, author Gary K. Wolf wrote Who Censored Roger Rabbit?, a murder mystery novel involving hardboiled detective Eddie Valiant as he seeks to uncover who murdered famous comic strip character Roger Rabbit, using a "doppelganger" of the former character to assist him in the investigation. From this concept, would eventually arise the 1988 Robert Zemeckis classic Who Framed Roger Rabbit?.

While this would adaptation would essentially change everything about the original story, it would also become an incredibly popular and influential film, propelling the character of Roger Rabbit to the upper echelon of animated legends. In the succeeding years, a series of cartoons would be developed involving Roger Rabbit and his co-host Baby Herman, and then...nothing.

What happened to Roger Rabbit? And what could've been done with his character, or what could be done now after almost two decades without any new Roger Rabbit content?

***
Okay, to be completely fair, its not exactly as if Roger Rabbit hasn't had some impact on the wider world beyond Who Framed Roger Rabbit? As stated earlier, Walt Disney Feature animation did release a series of Roger Rabbit short films between 1989 and 1993. These shorts being... 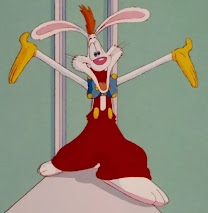 These shorts always stood out to me as a child due to their incredibly high animation quality and fast-paced action. Throughout the film Who Framed Roger Rabbit?, Roger makes constant claims that nobody can take a wallop like Goofy but I have to believe that based upon these three shorts alone (which literally is only 22 minutes total of animation) that Roger would be one of the greatest toon actors for his commitment to his stunts by themselves. There were four other shorts that were initially planned but for some reason or another never saw the light of day (Hare in my Soup, Clean and Oppressed, Beach Blanket Bay and Bronco Bustin' Bunny).
This really bothers me because the actual narrative plot of a Roger Rabbit cartoon is incredibly simple but so effective that it would be widely successful as an intro sequence for a movie (like Pixar often does with their animated shorts which aired before films). Baby Herman gets into trouble and Roger Rabbit gets injured and goes through wacky hijinks while trying to save the toddler. By the end of the cartoon however, things have gotten so out of hand that it takes the crew off set and we end the short by seeing the magic behind the scenes, usually after Roger or Herman has flubbed their line. It's a plotline so effective, it actually lived on in the Buttons and Mindy cartoon segments of the Animaniacs TV series (which Amblin Entertainment also produced).
So why the hell didn't they do anything else with Roger Rabbit in terms of animation? After the shorts, the only thing that Disney did that even came close to it was the 1993 Disney Channel series Bonkers, which was also taken from an earlier segment of the short-lived Disney's Raw Toonage series. And that show is infamously terrible in terms of both its terrible animation (which makes the "real" characters as cartoony as the toon ones, just to muddle the distinction that helped to define Who Framed Roger Rabbit?) and bad decisions made with regards to Bonkers, the main lead, who has some inspiration from Roger Rabbit but absolutely none of the charm. It's very clear that for all Jim Cummings talent, he can't capture the energy and charm in Bonkers that Charles Fleischer could in Roger.
Of course, outside of animation, if Who Framed Roger Rabbit? was so popular and well-regarded, why wasn't a sequel ever made? Well, back in 2016, Robert Zemeckis actually stated that he had a script idea, that he had everything he needed to make a sequel and was even excited at the prospect.
There was just one issue: Disney executives had absolutely no interest in Roger Rabbit and especially didn't like Jessica Rabbit. That's right. The reason that Roger Rabbit, one of the most popular cartoon characters of the modern age hasn't been allowed to prosper since his film debut outside of a few cartoons and cameos in the 1990s is because modern Disney executives and the present corporate culture wanted nothing to do with Roger (seemingly more concerned with swallowing up every available IP in existence and struggling to force their park employees to work in the midst of a pandemic).
It's complete bullshit and is, in my humble opinion, an unmilked cash cow just waiting in Disney's back pocket. Especially with Disney recent acquisition of so many different IPs, including Fox. It opens so many possibilities for toon cameos and Roger could have a great time being that bridge between the animated and live-action, especially if they do eventually get around to making a Roger Rabbit 2. Yes, with the passing of Bob Hoskins, there would definitely have to be some changes to occur, but I also think that it grants an opportunity for a truly beautiful tribute to an amazing actor.
All in all, I feel a tremendous amount of grief that such an incredible character as Roger Rabbit as been so woefully underutilized and mistreated. It is my sincere hope that we might one day see a return of one of Hollywood's greatest toon stars, alongside his bombshell wife and crass baby sidekick.
***
I would like to thank my monthly Patrons for their support of all of my content. You can join my Patreon for Behind-the-Scenes, Polls, and other fan interactions here.
MONTHLY PATRONS
Cendoo
Posted by The Brony Critic at 12:00 PM