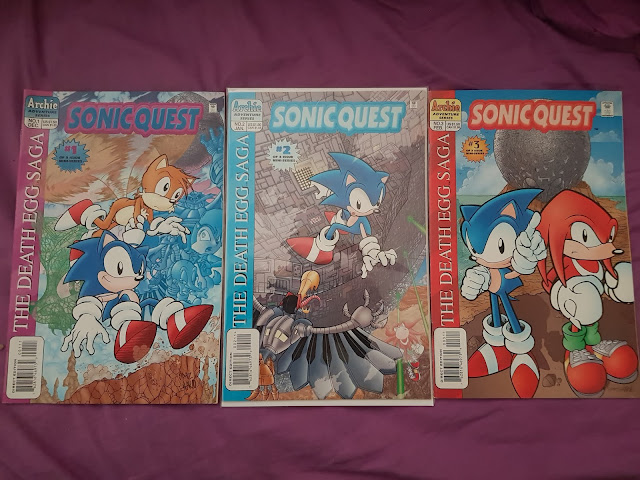 Today I, Kaiser Sensei am reviewing something that I hope to cover more of in the future, comic books.  Yes, those sweet thin stack of papers with the cool little drawings inside.  A lot of great and s**t things happen in them and a good chunk of them are worth posting reviews about.  In my first and (hopefully) not last comic review, I'm taking a look at some Archie-era Sonic the Hedgehog comics.  This is the three issue mini-series, Sonic Quest which came out all the way back in 1996.  Will they be good, bad, or just plain meh?  Find out in this review.  (Click on "Read More" to read the full article.) 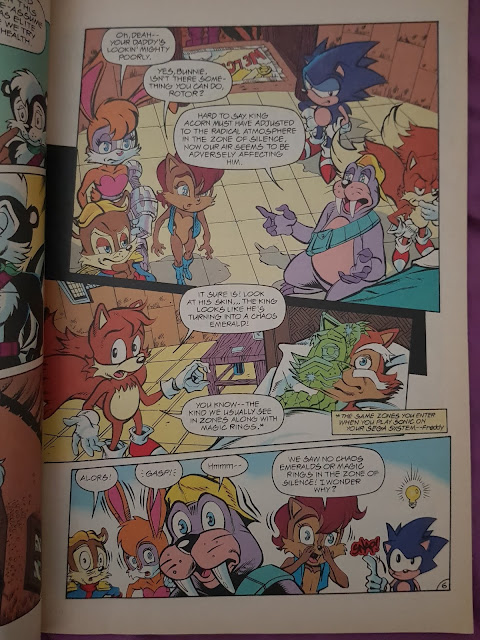 Sonic Quest is a special three issue mini-series that takes place shortly after King Acorn had been rescued from the dreaded Zone of Silence.  Sadly, the Zone of Silence has changed King Acorn to where the air of Mobius is slowly killing him by the way of crystallization.  Our heroes have discovered that the rings effect King Acorn in a positive way.  Sonic is now on a quest, a quest to find rings in hope of curing King Acorn of his dreaded disease.  There's a problem though, Dr. Robotnik is draining Mobius of rings to power-up his biggest creation yet! The Death Egg!  Now Sonic must find a way to bring down the Death Egg and get the rings back, so he can cure King Acorn.

There was no reason as to why this needed to be a three issue mini-series.  The plot was stretched out way to thin to where we got a lot of filler.  A two-part issue or a special super sized issue would've been more appropriate for this series.  Another thing I didn't like was that the death egg was a bit pointless and didn't pose as any real threat what so ever.  It served more as an annoyance to our heroes more than anything.  A very wasted opportunity for the Death Egg. 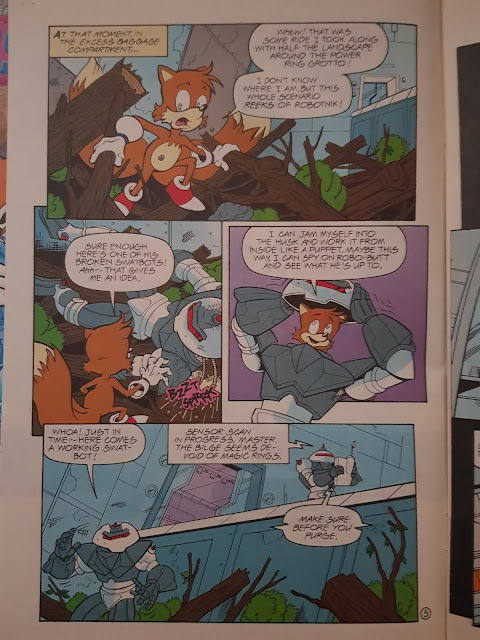 Don't worry, there is some good stuff in this series.  Sonic has a few epic fights and the one in the final part is one that must been seen to be believed.  This fight is one of the most insane things that I have ever seen in the whole Archie-era Sonic comics.  I'm sure that no one will mind if I spoiled what happens since this is an old series.  First Sonic fight has him fighting a robotized version of Carl Condor.  Nothing super over the top happens here but it's very entertaining and has an exciting ending.  Another epic one is Sonic vs. Mecha Sonic because it takes the fight from Sonic the Hedgehog 2 and puts it on steroids.

The icing on the cake was Sonic fighting Dr. Robotnick.  What?  That doesn't sound epic at all, you say.  Well, well, well, aren't you the wrong little cookie right now.  Sonic is fighting Dr. Robotnik whom is wearing a super strong and super creepy looking super suit that gives him super strength. (How super.)  How does Sonic fight Dr. Robotnik while he is like this?  Sonic jumps inside of Mecha Sonic and controls him from the inside.  Yeah, it's a f*****g insane fight that's worth buying the third issue alone just to see.  Tails also has some golden moments when he gets sucked up into the Death Egg and disguises himself by gutting one of Dr. Robotniks' guardbots and wearing the shell.  Other than that, not much going on except for some stuff that builds up for future issues. 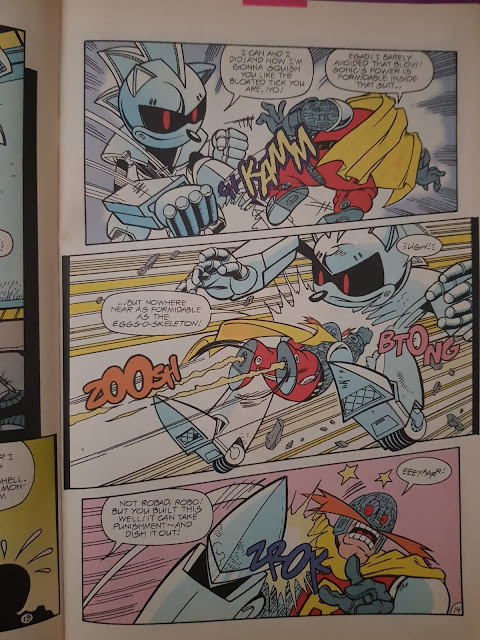 The artwork is fantastic and it just makes everything come alive with its great coloring and awesome detail.  The cover art is also top-notch and are worthy of displaying.  I also love the little touch of the spines being in the style of Sega's American box arts.  Issue one has the red Genesis spine, issue two has the blue Sega CD spine, and issue three has the purple Game Gear spine.

Overall, a very disappointing mini-series that has some good stuff but also has a lot of filler.  I'm giving this story a 4.5 out of 10 and it would've been much lower if it wasn't for the ultra crazy fight towards the end.  Skip it! 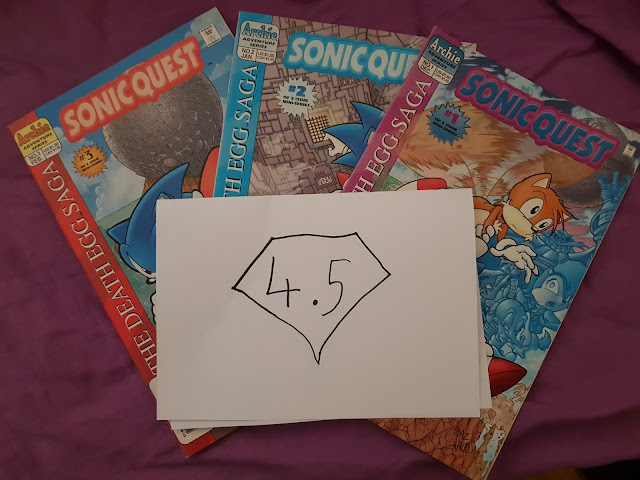