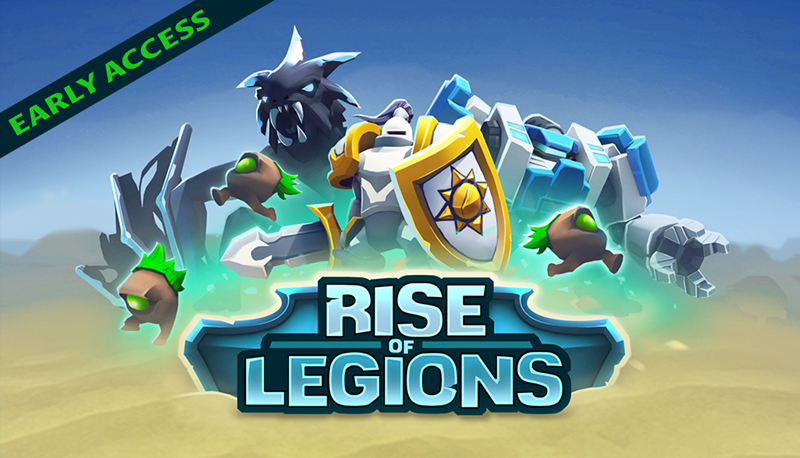 What do you get when you cross an RTS with a card game based on an old Warcraft 3 mod? You get Rise of Legions! Yes, our friendly developers Broken Games were nice enough to give us early access to this free-to-play game that shows a lot of promise. Click "read more" for my full review.

Game play for Rise of Legions is very simple. A tug-of-war style map using your deck to summon things to fight for you RTS style where you try to make your way to the other end of the map and destroy your opponents health bar by attacking their bases crystal or Nexus. A simple mana or currency system is used to determine how frequently cards can be used (more on that later). 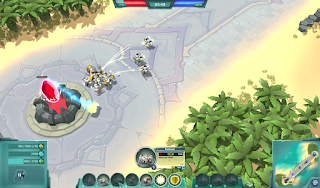 The map is a straight shot to both players bases. In-between the bases, there are 3 towers that attack the opponent and let you spawn units within their range. These towers are claimed when only one players units are near them. Every battle has a clock, after 4 minutes and 8 minutes the towers increase strength, and over the 10 minute mark, showdown happens. During showdown, the towers attack the base nexuses, meaning both players slowly loose health. I really dislike this mode, it is basically a time out win. Whoever was ahead during showdown has basically won the game. There were many battles I lost due to showdown just as I was starting to turn the tide in my favor. Granted it does help prevent a battle from taking too long, I still hope future updates give you the option to disable showdown.

A lot of the time will be spent on deck building. There are 12 slots in a deck and the balance of how many of each type of card is up to the player. Every card belongs to a category represented by colors and every deck can have cards from up to two different color types of cards. (Example: green is for the plant life cards and blue represents the turret.)

There are 4 main types of cards. First, there are Spawner cards; these can only be placed on an area behind your bases Nexus that, as the name suggests, will gradually spawn in more units automatically. Arguably the most important card. 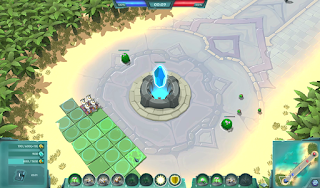 Next up, are the Summoning cards that summon creatures or objects to march forward and attack the opponent, the unit that can be placed on any captured territory. These are very straightforward and are balanced on a quality vs quantity scale. By that, I mean that some cards will summon multiple weak soldiers or one strong creature. In addition to simple strength, there are some that attack from a distance or close range which allows for some strategy. These cards will be used the most frequently as they have the slowest cost to play. 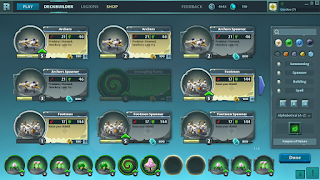 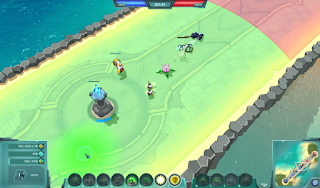 Less straight forward than the last two types of cards, there are spell cards that can be played anywhere. These are very simple to understand, they cast a spell that either helps your unit or hinders the opponents within their given radius. They have a lower cost to use than summon cards but are situational and their effects only last a few seconds.

Lastly, there are building cards. Basically, these cards act similarly to summon cards, except that they create stationary objects like turrets or things that summon tiny enemies, similar to a spawner but weaker and for a limited time. 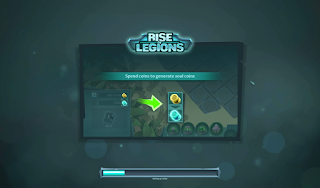 This sounds a little complicated but it really is not and allows for different types of strategy. For example; a common summon card has a cost of 100 coins and a common spawner costs 800 soul coins but more powerful cards can cost 150 coins and 1500 soul coins and you gain 10 coins a second (with that number increasing overtime). With that alone, a player must decide whether or not to spend their coins as they come or hold off and use bigger cards or multiple at once.

The more you use cards the better they become. Yes, this is not as simple as collecting the best cards, they actually have a level system. There are two ways to level up a card; either use them in battles or sacrifice other cards. (This means duplicates are still useful.) However, once they reach a certain level, you must pay to bring them up a rank. To bronze, than silver, than gold, and finally crystal. As cards rank up so does your deck's rank and the game will only match you against opponents with the same rank deck in order to be fair.

Outside of battles, there is another currency system. This is used to level up cards as well as purchase them. There are two types of currency. Firstly, there are the Credits which are earned from battles and completing quests. Also, there are crystals that can be earned the same way but are more valuable since they can purchase cards before they are unlocked and have smaller price tags. Why? Simple, these Crystals can also be purchased with real money meaning, the dreaded micro-transactions. 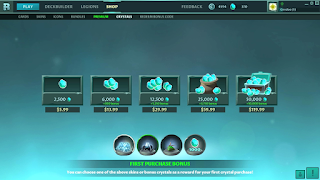 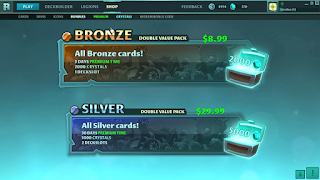 It is fun to build up your decks power, but that can easily be ruined by facing opponents who purchased it. This feature really hurts the progression of the game.

Ranked matches are not yet included as of writing this review (but has been promised for a future update). So, there are 4 game modes to choose from:

Tutorial - pretty obvious. Play this to learn the game

Quick match - Play against anyone online at random

Custom Match - Search and play against a specific opponent

Golem Challenge - The only single player option. Fight against a Golem deck of different levels. These Golem Cards cannot be used by players making this mode a unique experience from the multiplayer. 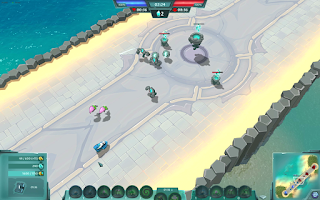 As a whole, game play is simple but addicting and shows a lot of promise.

Sound effects are basic yet fitting and there is very little music in the game. For what little there is in the audio department, it is just okay, nothing really of note but passable.

The visuals and art style are appealing, but very limited. There was only one map, which is fine since there isn't any type of field effect, but it is still quite repetitive. Graphics are simple and isometric which actually works pretty well for a game like this. However, the cards only have 4 classes, meaning you will be facing a lot of repeat decks and mirror matches, and the designs are very basic. One class are plants, warriors, turret, and monsters. All the card variety is locked behind leveling up meaning you will have little options in terms of deck building. Basically, almost everyone using a class will use the same cards from it but in different quantities. By no means is this a critical flaw, it just means there is room to grow. 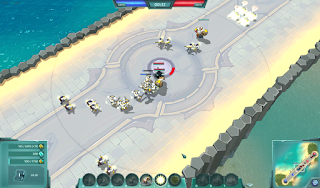 Rise of Legions is fun, addictive, and free to player with some typical early access drawbacks. At its core, gameplay is solid and can get a lot of players hooked. The only real issues are the limitations. There are only 4 classes of cards and little variety within them. However, all these issues have the potential to be fixed with updates. Overall, despite its current incomplete nature, I would still give it a recommendation since it is free and easy to get into.