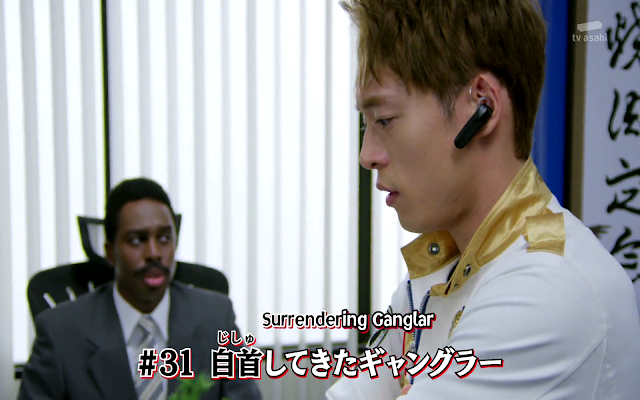 Wow! That is I title I wanted to see for years. Nearly every monster fought in any Sentai is an intelligent life form that the Rangers kill without hesitation. What if one of them surrendered not wanting to meet the same fate? Click "read more" and we shall find out.

The episode begins right in the middle of a giant battle between the Lupinrangers, a Porderman with a safe for a head, and a Golem helping the Porderman. Tooma says they already have the collection piece so they should hurry up and finish the fight.

While this is going on, we get to see a new Ganglar who is clumsily running away from some more Pordermen. And, now apparently, Pordermen say "Chaka". 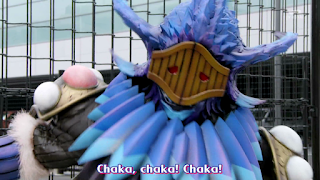 The giant battle wraps up quickly, (while revealing it was another Gauche experiment). Meanwhile, the new Ganglar is getting beaten up by the Pordermen when the Patrangers show up and destroy all Pordermen. After this, the Ganglar immediately surrenders. Cut to intro!

A lot of build up going on at once.

One theme song later, this new Ganglar attempts a plea bargain. In exchange for revealing Ganglar secrets, the Ganglar wants his crimes overlooked so he can have a new peaceful life. Noël Takao doesn't trust him at all, but Sakuya thinks they can trick the information out of him without making any deals. What follows, is a couple police references from other series. 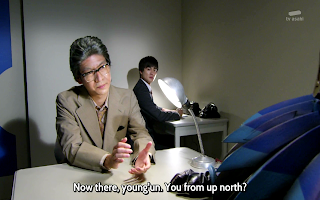 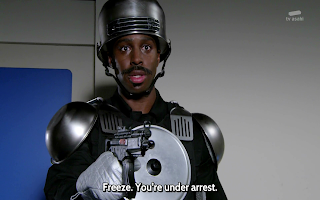 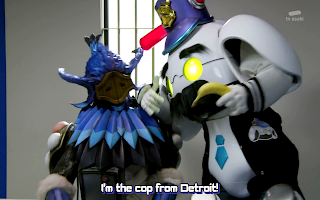 I give them a C for creativity and a B for delivery.

This plan, does not work at call, so Tsukasa takes control and questions him normally.Thanks to this, we finally get to know this Ganglars name. Yoshi Uraza.

The questioning seems to be going well, however Noël Takao notices that Yoshi's safe started glowing which makes him suspicious. He tries to tell Tsukasa not to get further involved but doesn't say why so she dismisses him. I'm sensing he doesn't trust the Global Police with his theories.

A couple scenes later, Tsukasa brings the news that Yoshi's plea bargain application has been approved. Yoshi has a few fantasy scenes about a free life, and the two celebrate with some food. Those fantasy scenes are trippy He imagines himself and the Patrangers as kids in school, then himself as a house wife for Tsukasa dressed up like a business man.

Finally, Yoshi reveals his story. This whole time he had an injury which it turns out was from one of Gauche's experiments where she surgically removed one of his safes. Yoshi ran off before she could remove his other safe.

Gauche is one of those psychos who do surgical experiments on conscious patients. If they weren't people in suits, this shows rating would have gone through the roof.

This is the point where things start to unravel. Noël Takao makes a request for Yoshi to be transferred to the French HQ which infuriates Tsukasa, but he refuses to answer any of her questions. While said transfer is happening, the Patrangers get attacked by Pordermen so Tsukasa takes Yoshi and runs while Keiichiro and Sakuya fight them off. Anyone else notice how those foot-soldiers are only ever a threat when it's plot convenient? Emotions run high between Yoshi and Tsukasa, so Yoshi gives her his Lupin Collection piece. However, after giving that treasure away, Yoshi's face opens up revealing a split personality. Now, he is attacking Tsukasa. 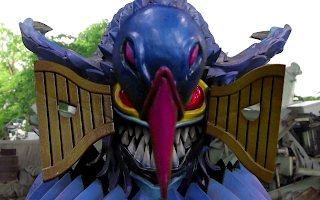 I'm actually a little happy they didn't have the Ganglar just be lying this whole time. But, still a little disappointed it had to be some kind of spell.

Noël Takao comes in to help out and explain some heartbreaking news. Turns out, Yoshi's Lupin Collection Piece switches good and evil, meaning his entire reform was only because he had that treasure. Takao knew this the whole time and just couldn't bare to tell Tsukasa. That's kinda touching.

This news devastates Tsukasa, but she quickly snaps herself out of it. Keiichiro and Sakuya return around this time and the 4 Patrangers go on the attack with Tsukasa especially fired up for action. It's a pink power episode folks. The fight doesn't last long but gives Tsukasa some good highlights and it ends with their fusion finisher. Why do Rangers always wait for the final blow to use their powered up forms? So wasteful. After Yoshi's defeat, a strange new Ganglar with 4 safes appears.

This Ganglar is obviously the result of Gauche's experiments. He arrives Slenderman style with the ominous noises and static cuts.

In an instant, the new Ganglar undoes the Patrangers fusion with one of his Collection Pieces powers known as Bad Boys. What'cha gonna do?

Gauche appears, but instead of reviving Yoshi and making him grow, she takes his broken safe, adds a new Collection Piece in it, and fuses it onto her experiment plus makes him grow. Now, we have a giant Ganglar with 5 safes, something both Goodstriker and Noël Takao think is unsafe to fight but Keiichiro doesn't listen. He forces Patkaiser to form but is quickly overpowed by the 5 safe Ganglar. The Lupinrangers arrive just in time to watch Patkaiser get blown away and they all look in with fear at their new opponent. Cliffhanger!

Finally, a good Patrangers episode. The Global police have been getting the back seat more times than not and have had more of the lesser episodes than the Phantom Thieves. This episode was just good. It was very well paced, good enough fight scenes, and it presented a pretty intimidating threat for the next episode. Although, this season has burned me on cliffhangers before, so we shall see. For now, this episode was still great.

Granted, the Yoshi story ended kind of abruptly but it served as good build up to the 5 safe Ganglar. That being said, it does still bother me how they chose to end Yoshi's story. There was almost a romance between him and Tsukasa and for it to be all just the effects of his collection pieces. At the same time, it did give Noël Takao a chance to show his compassionate side when he arrived to save Tsukasa and give her some compliments. Other than that, the only thing that bothered me were the 3 Lupin Collection pieces all being props that were made from past season morphers. There is no way the audience wouldn't recognize the Mobirate. But, that is just a pet-peeve.
4/5
Posted by Cendoo at 12:48 AM