Here is a very unique title known as Agartha developed by Shindenken and published by Fruitbat Factory. A puzzle platformer with pixelized graphics and simple, yet original and addictive gameplay. Click "read more" for my full review.

At first glance, Agartha gives the impression that it is just a simple 2D platformer/shooter with low resolution levels. However, this game is much more complex than that due to one simple mechanic, breakable stages. This mechanic is where all the puzzle elements come into play for this game. 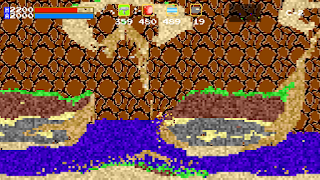 Every level has the simple objective of making it to the exit which is indicated by the yellow dot on the map. There are also side objectives of collecting jewels and meat, or finding an alternate exist in specific stages that unlock more stages. The most common obstacle faced is the lava. Most weapons can be used to break the environment, but only specific elements per weapon. For example, bullets and explosions can clear dirt or mud, fire will get rid of oil or water, and ice can turn steam into water or freeze water. Ammo and health are restored in-between stages but cannot be replenished in mid-stage making every use of them require some thought and planning. There is also a self-destruct move in case the player digs themselves into a place and gets stuck. 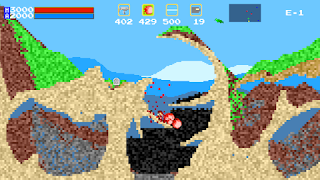 Combat is very solid in this game and well balanced. Enemies put up a fight but are never too strong but can make you waste your limited ammo. Unfortunately, the same cannot be said about boss battles. They have devoted stages so ammo does not need to be conserved, also a massive hit box that makes them easy to spam with attacks. Far too easy battles with the acceptation of the final boss. 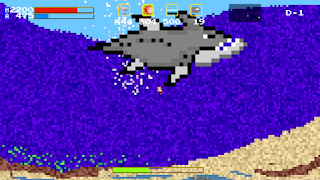 There are 8 characters in total and all of them have different weapons and stats. Characters are unlocked using the two collectibles, crystals and meat. Meat is dropped from killing enemies which makes it an unlimited collectible and can be gathered from most stages. The crystals have a set number and are found in specific areas of stages which are indicated by the blue dot on the map. 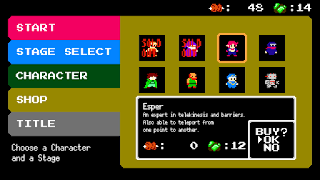 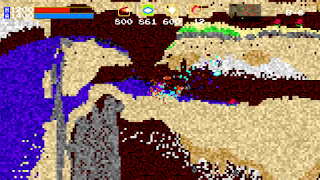 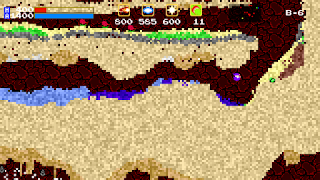 Ideally, the idea is that the player will switch characters in order to fit their preferred situation. While to a decent degree that is what happens, sadly the characters are not well balanced. Only about half of the characters are needed to complete everything and some of them have too many draw backs. 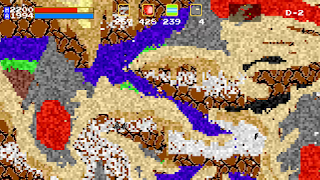 Gunner: The character you start with and the typical default choice. Has a weapon for any environment and does not lack or excel in anything. In theory, one could complete the game with just this character, it would just be difficult. 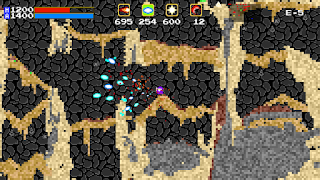 Wizard: As a lot of attacking spells, and is great for combat on both land and underwater. The drawback being that he doesn't move very fast or jump very high, has lower health and air, and only one of his spells can be used for digging (which only has 16 uses). Good for fighting, not good for exploring. 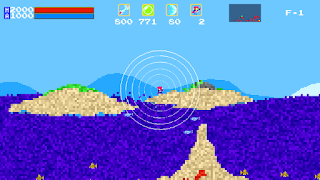 Esper: A psychic elf. Can move environments like mud or sand without destroying them, has a useless barrier skill that pushes enemies away from you while making you move slow, a shock wave skill that is good for digging in straight lines, and a teleport ability with only 2 uses. This character is very situational. The teleportation ability can be super useful for getting around tough areas but is very limited. Basically, this is a gimmick character. 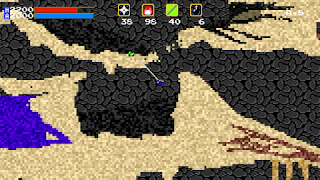 Ninja: By far, the best character. Weapons are pretty basic, but the Ninja has a grappling hook ability that lets him climb up high places and swing across areas. This will make him the ideal character for exploring and will most likely be used on any level with large areas. Only draw back, not so good underwater, but still very over powered. 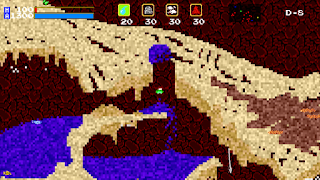 Alchemist: Walks slow and can barely jump, but has the most interesting abilities. Basically, 4 spells that can turn anything into water, steam, rocks, or lava. Terrible at combat, but can be useful for finding new routes to travel go in stages. 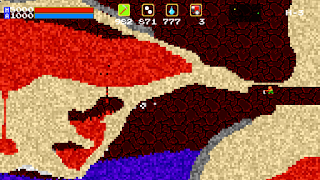 Farmer: On paper, this sounds like it would be a very useful character for digging. The Farmer has a hoe with loads of ammo and an exploding effect that clears away land. However, the hoe can only swing down making him useless if he falls below the exits level. Also, he has a plant growing ability, a water shooter that requires being in water to use, and a tracker that attacks enemies but can only move forward. Ironically, this is one of the most expensive characters to unlock but is completely unneeded in any stage. 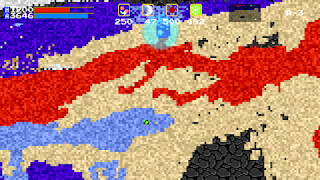 Geomancer: Can manipulate temperature around him, as a super short ranged wave attack for fighting and digging, and can create more of an environment. (Like, shooting dirt to make more dirt appear by it.) Decent health and air but still an almost useless character due to how situational his abilities are. 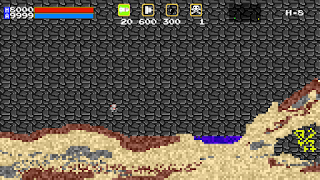 Robot: Cannot jump high but has massive amounts of air and health and loads of weapons. Most likely, this was meant to be the tank character or the slow one that is the strongest. That effect is achieved, but it does not prove to be very helpful with the puzzle aspect of this game and only very felt vital in the final battle.


As a whole, the game play is a simple concept that can get very complex and is a lot of fun to overcome.

The music and sound effects can be described as stock. All dialogue is text and there is no real stand out track in the game. Nothing bad, just basic.

The graphics in Agartha have a style very similar to an old DOS game that was made well. It is an appealing retro feel. Level designs are well put together mechanically, but lack variety. Almost all of them are underground themed and the lava obstacle is pretty much the only threat used in most stages minus the enemies. It is difficult to image how much further they could have taken this concept, but a dessert or frozen stage to showcase the other elements would have been a nice change of pace.

As a whole, Agartha is very fun and affordable indie title that requires very little PC power to run. There are some balance issues and a bit of repetition with the limited variety in stages or enemies. However, as a whole, this game is still a very fun experience and I would highly recommend it to anyone who is a fan of the retro feel, looking for a distraction, or simply do not have the time or resources for any mainstream title.