The story is by far the strongest part of this title. There are two primary characters, the one telling their own story and the one the story teller refers too as "you", neither are ever given a name. For the sake of this review, I will refer to the one this story is about as The Narrator, and the person they keep referring too as "you" as The Acquaintance. Through one line of floating text at a time, the player learns about The Narrators later years in high school and their interactions with The Acquaintance, years 7 to 12. 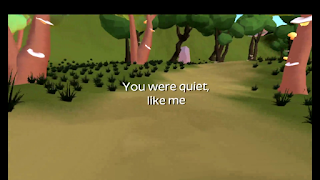 Everything begins relatively normal, but as the story progresses, The Narrator speaks about social interactions and feelings of hurt, being lost, and many other symptoms of depression. Things constantly get darker as the story goes on, and the entire time, The Narrator is blaming everything on The Acquaintance because of the things they said or the way The Acquaintance keeps coming and going. It is not until near the end of the story that The Acquaintance says anything. Right as things in the story are at their darkest, a big twist is revealed that changes the perspective of everything. No spoilers.

This story feels incredibly real and had me hooked despite the lack of voice acting or any cut-scenes. As someone who suffers from depression, it was not hard to relate to some of the feelings The Narrator was going through. Despite all simplicity, the lack of names for the characters, and how short the story was, I have never felt more engaged in any video game story. Also, I suspicion that this story is not entirely made up, based on the credits.

Game play is practically nonexistent. It is first person, you move with the left stick, look with the right, and can move slightly faster by holding down the X button. That's it. The player walks forward on an extremely linear path as the text appears in front of you. 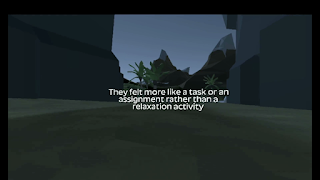 There are random collectibles hidden throughout the game that do nothing except earn a trophy. Most of them stick out as well. 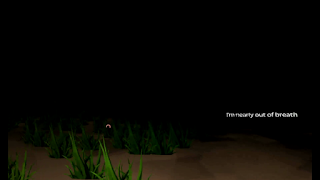 Other than the main path, there are 3 secret endings that can be found at 3 different points where it is possible to escape the narrow path. Besides these 3 alternate endings and trophy hunting, the game play is literally nothing but walking forward. A standard playthrough takes less than 40 minutes, even a Platinum run was less than an hour and a half. Not much to comment on.

There are three things you ever hear in this game. First, is the sound effect for a keyboard whenever the story is being typed out in front of you. Second, is the background music, which is calm, suspenseful, and stock. Third, is the sounds of crickets and light howling found only in the dark forest area. All audio is as bare minimum as possible which fits this games feel very well, but is still forgettable.

Graphics are not impressive on the Vita port. The low polygon environment is intentional, I know because it was advertised in the games description. However, the Vita port lacks the nice lighting and moving water that the home console & PC ports of this game have.

The Vita is inferior in graphical capabilities, but it is not THAT inferior. This downscale leaves much to be desired in an already unimpressive looking title. I'm sure there is some symbolic reason for this art choice, but that does not give the game a free pass. However, if there is one thing that the visuals get right, it is the atmosphere. Things start off peaceful and eventually get horrifying which matches perfectly with the story.

Drowning can be best described as an "experience", an inexpensive one at that. The story is the games only real selling point, but it is just that deep that I would still give this title a recommendation. Overall, it is an easy Platinum Trophy, an amazing story, and everything else is below average.

Still an experience worth having
Posted by Cendoo at 12:00 AM