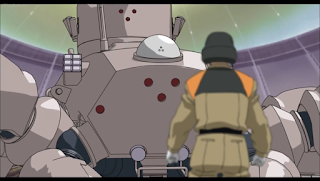 It begins with a shot of what appears to be a large dome and over a city, proceeding further down into the said dome onto a grass and mud laden area, some sort of exercise is being preformed, zooming into a tread track indented into the wet earth. Water ripples as we bare witness to a tank walking around without anymore within. The men below are confused, frightened. The tank turns around, and begins to open fire upon the other tanks in the area... With these men atop them. They run in terror, the other tanks are annihilated into burning heaps.
"Hey, what's going on down there?" A man in a suit asks over the phone. They were showcasing their newest tank to military. We see a mysterious man with sullen brown eyes. "I hope this is what you really wanted, Kago." He monologues mentally to the audience. The hijacked metal beast breaks through a metal door. Cue episode card, Testation, which means "the disposal of property by will." This will hold greater meaning as we advance though the episode. 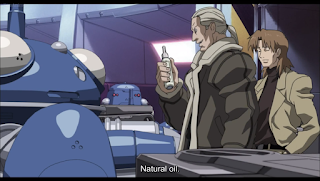 Now we're back at the Section 9 headquarters, looking at the loveable and always cute Tachikoma walker robots. They're discussing if the robots contain any individuality within their AI, that they're all the same. Batou and Togusa are there, and Batou gives the Tachikoma some natural oil. How nice of him. Togusa questions "Is it a good idea to give it that stuff? It might get funny ideas."

"It's okay," Batou replies, "This is just an expression of love for our machines." The big ol' blue bot is thrilled with the oil as well. Major Motoko comes walking in. "Prepare six Tachikomas for dispatch with full loadouts!" She calls. Somethin' us going down. We're treated to an explanation of what he witnessed earlier. 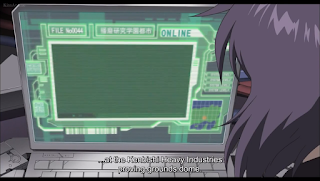 A new multiped tank went haywire at the Kenbishi Heavy Industries proving grounds dome (This anime loves its long names for things I swear to God). They currently don't have a many details but the person piloting the tank is using the ID code of the tank's designer, Takeshi Kago (there's the name Kago again), who had died the previous week. No demands have been made but it's suggested possible terrorism. It ran during a test exercise for a final fine-tuning... Hm. This is an important mission because Kenbishi could be blamed by the Self-Defense Forces, considering they were considering adopting them into service. Plans are made and now they're on the move to intercept the tank!

The police have set up a blockade when Batou and the Major arrive on scene, with the tank passing them by when the Major asks them to step aside do they can handle it. The follow in suit and discuss what could the tank wielder's plans could be. Apparently the known terrorist organizations aren't behind it, so what's going on with this thing? 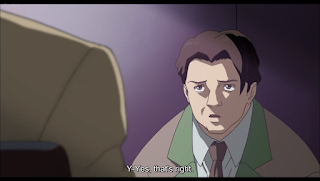 Togusa and Aramaki are in view, speaking about Kago's fellow colleague Ohba, who like Kago, was also in charge of development. Apparently he was doing maintenance on the tank before the incident took place. Togusa and another Section 9 member go in to speak with Ohba. He's nervous as they come in. 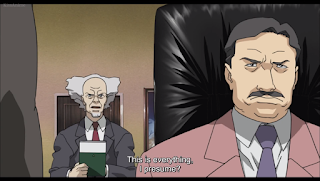 Aramaki is now talking with Kenbishi higher-ups, demanding information on the rampant tank. He gets a file and sends the information to Major. They near the interception point with Saito poised with his sniper rifle and his mechanically enhanced eye. The Tachikomas that were following behind fall back as he shoots at the runaway tank, only for it to side step the round launched at it. He fires again, missing once more. Apparently it was using the data from his eye to figure out where he was gonna hit. He uses his human eye to land a shot on it's exterior after the tank attempts to shield itself with smoke.

Not all the information on it's capabilities was given, it seems.

The decide to regroup then as the tank moves towards the city. The Kenbishi people still won't release all the information needed in fear of the public learning the specs of the tank. Togusa is still interrogating Ohba, the engineer playing quiet with the detective. 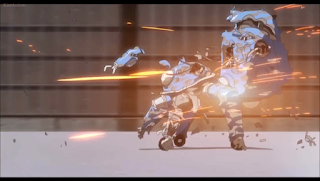 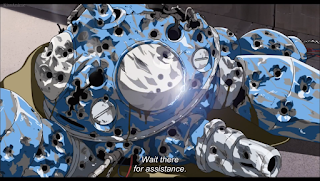 The Tachikomas, Batou, and Major Motoko trail behind the tank. One Tachikoma opens fire upon the tank, only for one of the six to be ripped apart by gunfire. But he's fine... Aside from the bullet holes and oil leaking out. 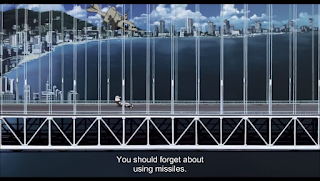 The fugitive tank now crosses a bridge that when it finally gets over, it will be in civilian territory. This is the last chance they can use antitank missiles on it. However they could accidentally blow the bridge up. The Kenbishi people finally let them know that the tank can deflect missiles now... Good to know now before they open fire, eh? 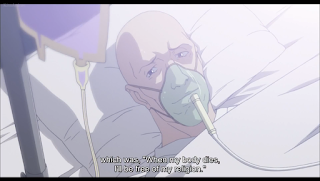 Togusa comes into the room with Ohba, finally spilling the beans on something that was completely obvious from the get go- that the dead engineer Kago is operating the tank... But how is that possible? Ohba hooked up Kago's brain into the tank's AI after his death. Why did he do it? It was his last request.

The tank is heading to Kago's parents house. He might want revenge because his parents wouldn't allow him to get a prosthetic body due to their religious beliefs. The only reason he lived to 28 was because of his will to see his tank created. Ohba grew up in a similar situation but received prosthesis to survive. Kago's last request was to become part of his tank because when his body died, he wouldn't be bound to religion any longer and could actually live and be reborn into a steel body. The music in this whole scene is really fitting here. 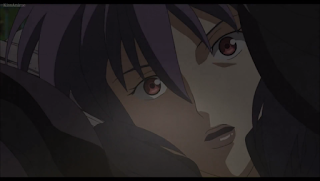 The tank hasn't killed a single person yet, but he may harm his parents. The owner of Kenbishi finally gives up the last bit of information to save face for his company. They try to detain Kago's with wires around it's body, but fail.  Major Motoko hops out of her Tachikoma (cue obligatory ass shot because anime) and she climbs atop Kago's tank, shooting the hatch in an attempt to pry it open. 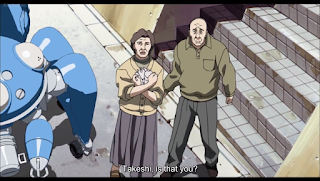 Aramaki and the bearded Section 9 man fire a weird hardening green substance at Kago, slowing him to a halt. They pop open his hatch... And his parents come out of their house with a little model of the tank in his mother's hands. He slowly reached for her with a clawed appendage. Major quickly shorts out his brain, seeing flashes of his life before her eyes. 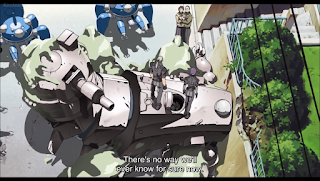 Major Motoko felt something when she burned out Kago's brain. "Well, Mom? What do you think of me in my steel body?" It wasn't pride or vengeance. Batou tells Major it was was just a hallucination. She hopes so and there's no way they'll ever really know for sure.

Final Thoughts: This is one of my favorite early episodes of the series due to the themes of wanting to transcend one's body to live. This poor bastard just wanted to survive and this was his only way of doing so, only to die in his final moments trying to prove something to his family. Strong plot, still heavy on exposition of companies we don't know, and good music accompaniment near the end place this at a 3.5/5 for me. Not perfect, but still higher up on the scale than the first episode. 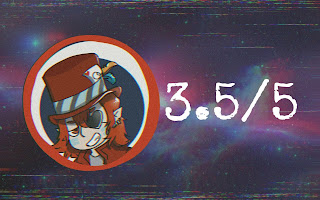