Game play in Almost There is a one-hit-death rush to the end of the stage type of game similar to Super Meat Boy. You take control of a white square with a red bandanna that has a single jump, and a wall jump used to avoid obstacles and pits. There is no combat, collectibles, or choices, the only objective to to reach the end as fast as possible. 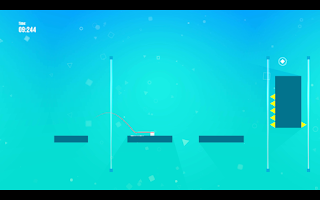 There are three words that each have 50+ courses in them. The first one is blue, the second is red, and the third is dark blue and are each more difficult than the last. In addition to precise timing challenges with jumps, each world introduces new threats. Blue world focuses on spikes and laser grids with a lot of wall jumping used to advance vertically. 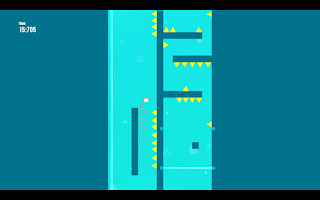 Red/Second world adds bounce pads that launch you into the air, platforms that collapse after being touched, and rotating blades that either are pinned to a platform or shoot out of a wall for more obstacles. 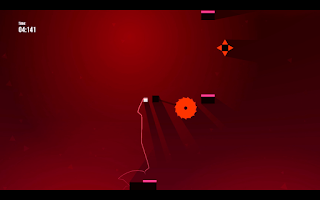 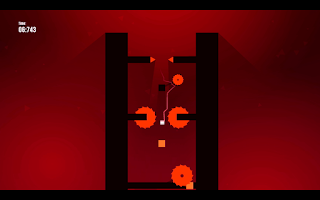 And, the dark blue/third world adds torrent like devices that follow the player and fire rockets/homing rockets, or lasers. 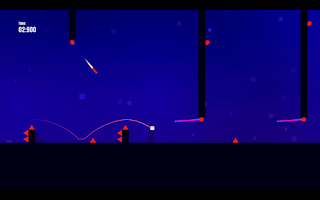 Every course has a 3 start rating system that is based entirely on how fast the course is completed. One star is given for simply finishing a course, 2 requires a good time, and 3 stars would be a near perfect run. Other than unlocking new worlds/courses faster, there does not appear to be any reward for gaining starts. Regardless, it is still a nice feature to recognize skill in this game.

Controls are very simple, yet still innovative. There is only move and a jump button, but the interesting feature comes with wall jumping. By holding down the left or right direction, you can stick to a wall for a short time and climb up it. Obviously, the jump button can be used to bounce off the wall; yet, pressing down on the analog stick or arrows also causes your square to jump off instead of fall. At first, this will lead to a few deaths that feel cheap, but, being able to control your jump distance can allow for some fast scaling up walls. Whenever the player jumps off a wall, they can perform a second mid-air jump in the opposite direction. By using this technique, you can quickly scale up walls by simply flicking the analog stick back and forth which allows for more control. This is no trick though, many stages will require this skill in order to outrun or avoid obstacles. 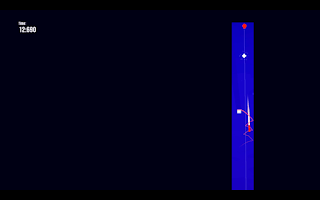 That is pretty much the entire game. A very simple concept that utilizes specific timed jumps with tight controls making it very clear what one can expect when buying this game. The only other thing is, the difficulty. While the game claims to be for the "hardcore" audience, it really is not super difficult. I am not saying the game is easy by any means, defiantly not something most casual gamers could handle, although, with no penalty for dying, very short stages and very few courses utilizing tricky or hidden tactics, it never felt impossible to complete. Even when dying constantly, it was almost always clear as to what I had to do in order to proceed; a major lack of the puzzle solving element. 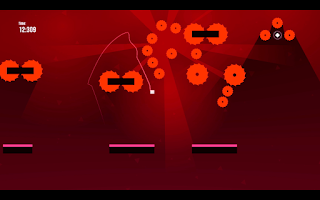 This course is a good example of having the puzzle solving element. The player needs to maneuver counterclockwise inside that ring of blades in order to angle themselves to hit the final bounce pad. I was honestly stuck on this stage until I saw the trailer showing how it is done. That takes thought to figure out and makes this stage feel that much more satisfying when completing. Sadly, with almost every other stage, they are hard, but they are always very clear on how to complete which I feel keeps this game from being "hardcore".

There is no dialogue as expected, and sound effects in this game feel very stock. Nothing is bad or out of place and I actually liked the music for what is was, but there is only one music track for each world, meaning 3. No variety either, each track sounds like a remix of the last. In a way, that does fit since each world is the same but more and each stage is very short so new music for each one would be unnecessary, but this defiantly felt like something that was not considered important in development. Not bad, not great, just average.

Level variety gets very creative with its challenges and are all structures very well with no exploits or unnecessary object. However, graphics, are just shapes and colors with backgrounds that almost feel like screen savers. 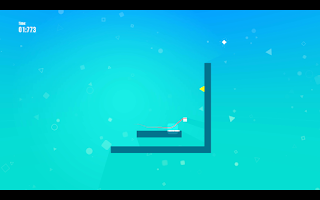 I am sure this was done on purpose as an artistic choice, unfortunately, it still feels like the easy way out. The only major issue is the background in the light blue world/world 1. It is bright with slow moving objects that is distracting and start to hurt the eyes after awhile. Most likely, this style will not turn off most players and while it is not impressive, the graphics do represent the simplistic nature of this game.

Almost There: The Platformer is a passion project with a specific appeal. Fans of 2D platformers who are looking for a test of skills will find some enjoyment out of this and, while not quite reaching the "hardcore" mark, this game is still a good challenge. That being said, it is far from a masterpiece. By no means would I call this game "bad" but simply okay. Controls are great, accessible on all platforms, even mobile, so all I can say is, enjoy it for what it is.