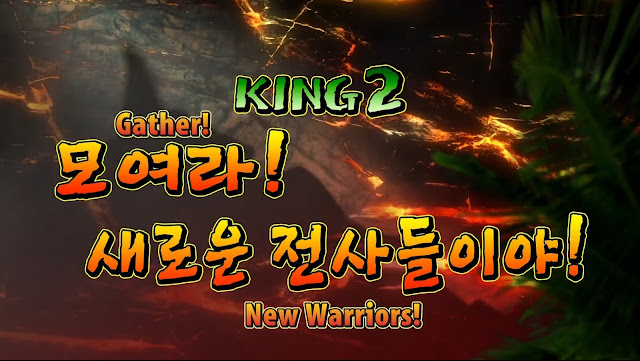 This special Brave season continues. With this episode, we are expected to see Green and Pink make their debut. So, click "read more" and let's see how they do.

After the theme song, the episode begins with Kwon, Jeon, and Sechang getting their team jackets and being at the spirit base for the first time. Candelilla and Luckyuro point out that there are still more Rangers to find and begin looking for them. Thanks to plot convenience, they both bump into the future Rangers in comedic ways. Luckyuro is trying to eat a lollipop when Lee shows up in a limo and offers him a stack of money for it because he has never seen such a colorful lollipop, and Candelilla accidentally knocks Yun into water after she went on a shopping spree. Yun says she "hates pink". Too bad for her Violet and Cyan did not make this season. Elsewhere, the Neo Deboth Army are planning their next attack. It is a very simple talk, the leader wants the Dino King Power but the old adviser says that Dino Force will get in the way. So, Arashu the Wind Demon volunteers to lead the next attack. 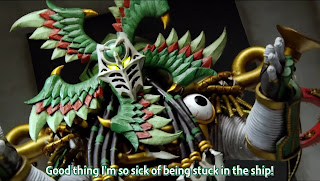 Looks like this season won't have a monster of the week but instead focus on the established general with separate giant monsters. That's probably a benefit to having a short season. Let's more of the villains become established.
Back to the Rangers, they have mixed reactions to Yun and Lee's appearance alongside Luckyuro and Candelilla. Yun fangirls over Sechang and calls Jeon lame. Lee is still fighting Luckyuro over the lollipop. Only Kwon thinks of them as the new comrades. But, before anyone can question him, Arashu shows up. He calls out Candelilla and Luckyuro as the ones who betrayed the last villains and Candelilla even gets a hit in before the Rangers go on the attack.
This battle starts off on a cool note, Kwon, Jeon, and Sechang all begin their morphing sequence, but rather than wait for the dance and henshin, they rush forward and use the dance to take out a few foot soldiers before morphing. Upon seeing this unfold, Candelilla, Luckyuro, Yun, and Lee all decide to flee. However, Candelilla has a twisted leg and cannot keep up, so Yun and Lee turn around to help her.
What does she mean "despite how I look"? Is it taboo for nurses to enjoy shopping and being a girly girl in South Korea?
Arashu jumps in front of the 4 of them declaring he will take care of the traitors first while the Rangers are still busy fighting the grunts. Yun puts herself in-between them while threatening Arashu to back off while Candelilla urges her to run. However, Yun cannot stand seeing someone attack somebody weaker then them and is ready to fight. Lee finally joins in, declaring that running away "isn't cool at all". The two fought Arashu desperately, but are outmatched and get smacked around.

I always liked the Rangers that wanted to fight back before they got powers. Even if they are kinda lame.
Impressively, these two actually show their worth. They get mad, do some cordinated movements, and actually manage to dodge Arashu's attacks and push him back with their own. Kwon jumps in at this point and is really impressed with Yun and Lee. So, he gives them their own changers and even Zords appear for them. We all know what's next. 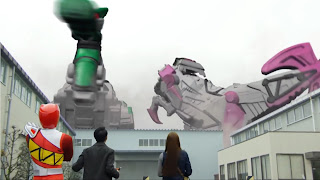 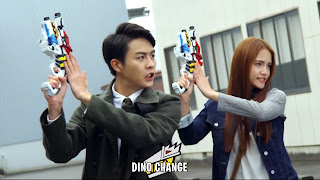 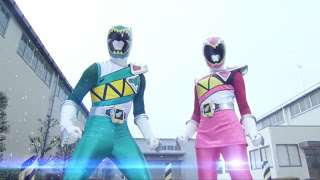 Poor Yun hates pink though. But, why Kwon the one to hand out the morphers?
Now a proper Ranger battle begins. Arashu is shooting and trying to fight back but is constantly being out maneuvered and taking hits from the 3 Rangers. Has anyone seen Blue and Black? Now, Pink and Green get to use the finisher, a cross blade beam attack from the two of them called Dino Brave Slash. While Arashu takes the hit, he does not go down but summons a giant robot to fight for him. Sechang and Jeon walk over finally and are confused.
Time for a new Megazord combination with Red Green and Pink. Brave Tyranno King Western. 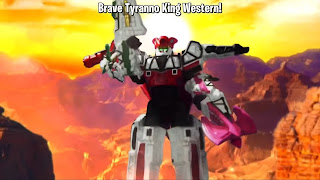 I don't get the name. Yun isn't from the west like Amy was and nobody is the "Bullet Brave" this time.
Sashima shoots a Gatling Gun that does not work at all and is basically reduced to a giant target to show off the moves of this new Mecha combination. The Rangers win with a Brave Finish. 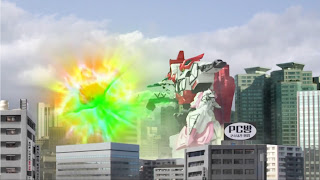 I'm getting Shonen vibes from this attack.
The giant robot goes boom and we even get a sneak peak at the Gold Ranger. 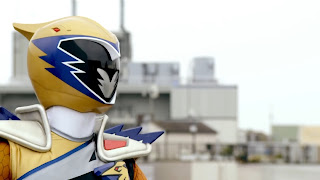 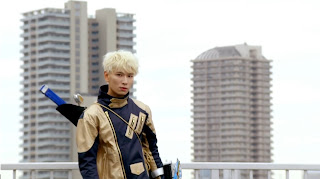 He looks way too flashy for a dramatic slow motion walk towards the camera shot. Also, this season really has no time to waste.
The episode ends back at the spirit base with Kwon formally introducing their new teammates. Sechang and Jeon are still unimpressed with them but Torin gives them the task of training them to their dismay. 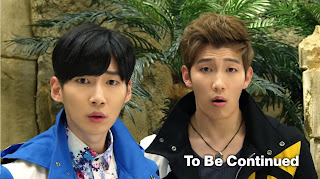 This episode kept the same momentum as the last; it lacked creativity but was a lot of fun. The villains are kind of boring and the Rangers are stock characters. However, the action was great, the acting was top quality, and the pacing was surprisingly better than a lot of Toei Sentai episodes I have seen despite having half the run time. Really only the Pink Ranger got to shine in this episode and the Green came off as just a rich boy looking for a thrill. Still, that did not hurt the overall experience of watching this. These first episodes have just been fun to watch with their fast pace action and martial arts. If things stay this way, I can call this a season to re-ignite the fandom of this franchise from old-timer fans like me. 4/5
Posted by Cendoo at 12:00 AM