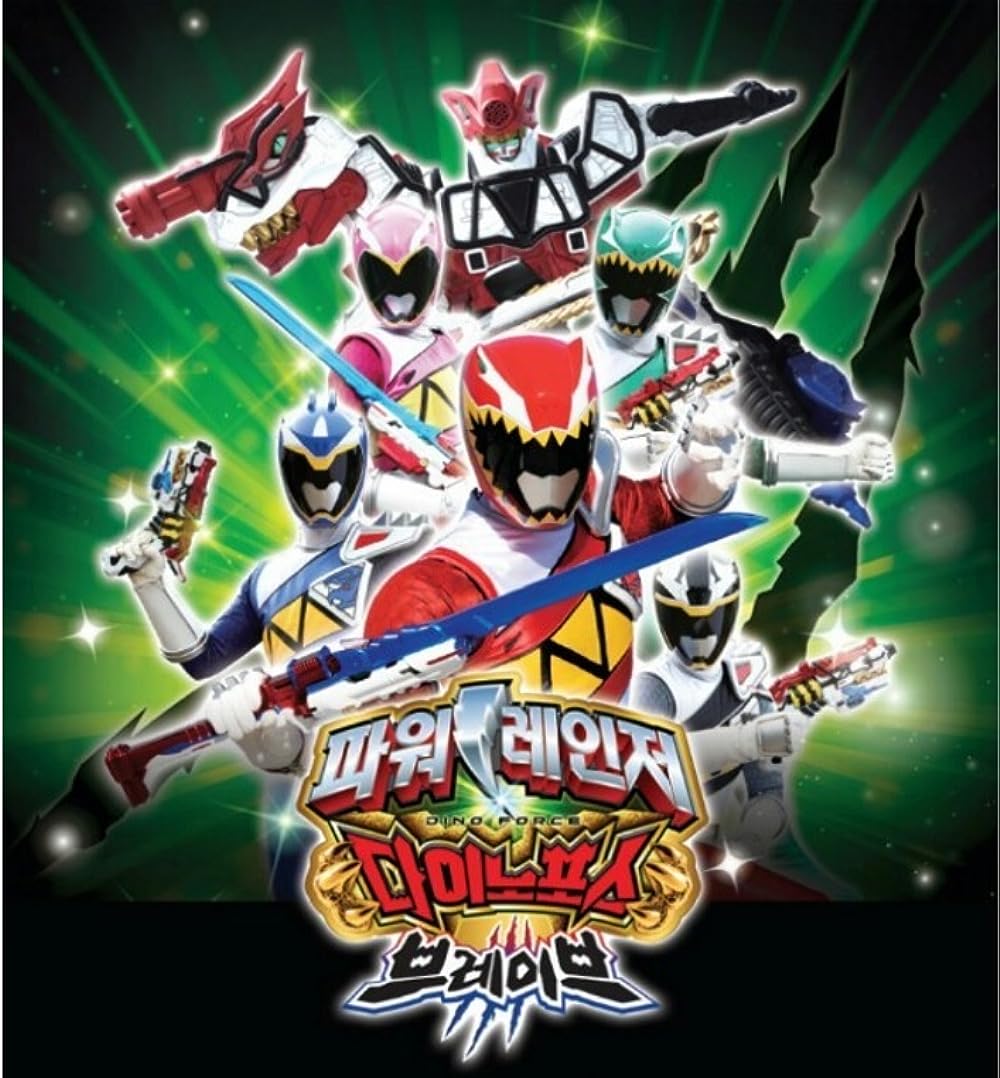 Ultimate trivia time! What we have here is South Korea's first original Tokusatsu production. Super Sentai in South Korea is an odd story. Generally, they simply show the original Super Sentai but re-name it Power Rangers, but different Power Rangers names than the US. However, Zyuden Sentai Kyoryuger, under the name Power Rangers Dino Force, was so successful in South Korea that they created their own sequel to it with new cast, new footage, updated costumes, and an all original story. This season would even be dubbed into Japanese under the title Zyuden Sentai Kyoryuger Brave. (Which makes it debatably part of the canon.) If that story was not interesting enough, Kyoryuger was my favorite Super Sentai so I am behond curious to see how this project turned out. Click "read more" and let the journey begin.

After a brief clip show of Power Rangers Dino Force (Kyoryuger), a narrator says the Earth is in peril again. Cut to theme song!
Catchy. 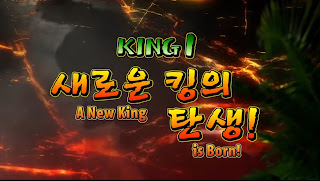 Now, the episode properly begins with the spirit of SPOILERS! the deceased Torin, (the mentor/silver ranger of the original team) who senses an evil energy. After this, we get to see the new villains. They are after the Dino Power so they can use it to rule the universe. Two of them named Homuras and Jinaric are deployed to Earth. 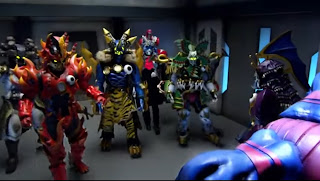 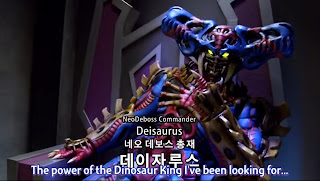 The theme of the villains are demons who each specialize in a different element. There is also a Commander on a throne and an old man type villain who stands by him. Their goal is conquest. Very basic, but not bad.
Homuras and Jinaric find GigaBragigas, one of the most powerful Zords that the Rangers used. Jinaric uses his Earth Powers to seal it. 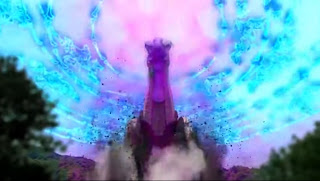 Cleaver way to explain why the best Megazords aren't available right away.
This attack causes an Earthquake at the Ranger's Spirit Base which alerts Candelilla and Luckyuro who were inside the base. SPOILERS! Those 2 turned good near the end of Kyoryuger/Dino Force. Luckily, Torin accends from the afterlife to save them. Torin Separates the Spirit Base and GigaBragigas is successfully sealed away. I would say something about Torin coming back to life without explanation, but Spirit Rangers were always apart of this incarnation. 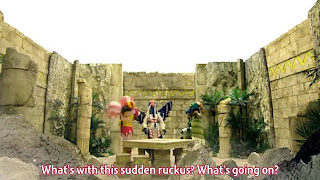 Clearly not the same set as Toei's Spirit Base. But, an honest attempt at re-creating it. Possibly the damage can hide the lower budget.
Original Spirit Base

Torin says he is limited in his Spirit Form and they need new Dinosaur Warriors in order to stop this evil. Now, we get to meet some of the new Rangers. It cuts away to a man who is apparently famous. 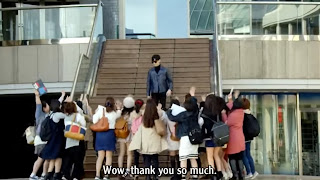 Wow, I wonder which Ranger color he will be...
This famous person is being flirty with his female fans until an officer makes them all leave. The two of them get into an argument about that until Homuras appears with some Zorimas. Why do these new villains have the same foot soldiers? Now, they are on the attack to try and lure out the Dinosaur King's power. The police officer rushes in to fight back and the famous man also joins in, turns out he can fight because he does not want to break his fan's fantasies. As for the fight itself, it goes the typical way of pre-Ranger power fights. They get some good hits in but still lose and get tossed around. 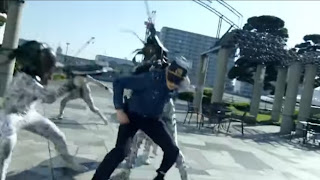 Is that how the South Korean Police work? They just rush in to a crisis without backup or any weapons?
Lucky for these two, help arrives. Someone in a worn out coat walks towards the battle in slow motion cowboy style. Then, he unleashes his Rex. The Rex takes out a few Zorimas and then this tough looking guy pulls out a street sign to fight with.
Does the cool quiet one get to be the Red Ranger? Fascinating. Also, I like how they made him look dirty and worn but kept his hair perfectly taken care of. They don't say it yet, but his name is Kwon Juyong and he is clearly going to be the Red Ranger so I will call him that from now on. We know everyone's name from the theme song.
Kwon takes out the Zorima with the street sign in one of the more violent fight scenes that I've ever seen in this franchise when Torin, Luckyuro, and Candelilla appear and are impressed. He introduces himself as a "child of Dinosaurs". Now, Homuras decides to up the scale and summons a giant Robot from their ship. I really want to see the behind the scenes with these costume designs. That almost looks familiar.
Kwon calls Cannontyra to grow giant in order to battle this robot. Now we get our first giant battle that looks really awkward. Imagine a man in a costume in from of a green screen and city set trying to look like he is fighting something that is not there because the Dinozord is CG. 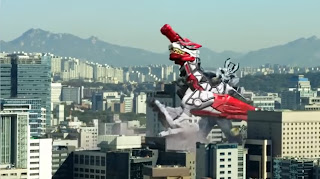 Torin gives Kwon a morpher, GabuGaburivolver, and Dino Cell #1 so he can morph into the Red Ranger. As it turns out, Kwon just instinctively knows the call and gestures to morph. The old henshin sequence got an update with a new dance. 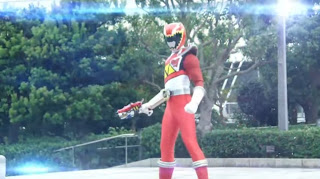 New costume added white to the chest area.
Old vs New morphin/henshin sequence
Everyone is shocked by this new transformation. Kwon easily defeats the rest of the Zorima with his new Ranger Powers. Homuras puts up a fight, but retreats after taking a few slashes.
Now, we get some backstory for this new Red Ranger. He again says he is the "child of Dinosaurs" and has been training in the mountains ever since he was little. Then, out of nowhere, he takes two more GabuGaburivolvers from Luckyuro and gives them to the police officer (Jeon) and the famous man (Sechang) and tells them to show him the Brave they have. That came out of nowhere. Their morphers activate for them and their Zords appear immediately after. 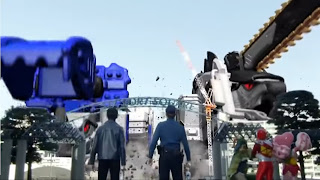 Wow, this season does not like to waste time. Makes sense considering it consists of only 12 episodes 12 and a half minutes each.
Jeon and Sechang transform into Back Dino Brave and Blue Dino Brave respectively and join in the fight. This leads to the first Super Robo combination or Megazord. One that is actually original. 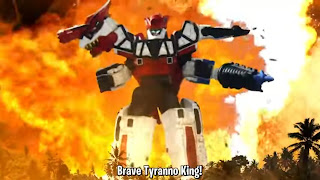 This is different. In Kyoryuger the first combination we saw was of Red, Blue, and Pink. Black and Green came later. I do not this Red, Blue, Black had a stand alone combination in Kyoryuger and if they did it definitively did not have that much white in the design. Nice to see them trying to to simply recycle the old stuff and do their own thing.
The giant black robot from before puts up a struggle, but is clearly overpowered by Brave Tyranno King and is pushed back after a series of punches and gatling guns. Dino Force Brave Finish is the name of the finishing moved used here, it is basically a chainsaw sword slashed through the chest. Robot goes boom and the day is saved. We then cut too two people watching who we already know from the theme song will become Green and Pink. 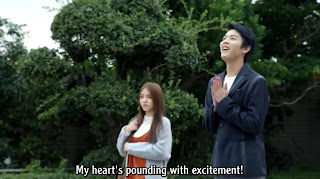 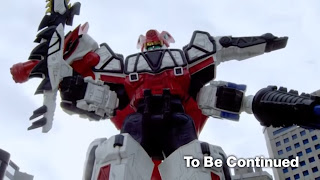 This episode had a lot of energy put behind it and was a lot of fun to watch. But, from a critical standpoint it is clear that this was a companies first attempt at making a Tokusatsu show. Enemies look cool but are stock and the heroes appear really quick with little introduction and are too eager to begin their new destinies. But, that really is not a bad thing. Considering this season was only made to capitalize off the success of Kyoryuger, it could have very easily been bad. However, while it is kept short and simple, there is good action, good acting, and it is shaping up to be a lot of fun to watch. For what it is, so far, I like it. Let us see if they continue this momentum.  4/5
Posted by Cendoo at 12:00 AM