The World is Your Weapon (Steam) - PC Game Review

Ever want a game that is cute, has hand drawn art, and a hilarious adventure? Look no further! The World is Your Weapon is a unique experience that is most definitely worth exploring. Click "read more" for my full review.

The story of this game is very simple, but surprisingly engaging. You take control of a pink haired girl named Weaco, a weapon enthusiast who follows in her late fathers footsteps by being a weapon merchant. However, Weaco's little sister Ponmi tells her the news a legendary weapon called the LOL sword that no one has seen before is apparently within their land and every adventurer from around the world is looking for it. Weaco, being the huge weapon enthusiast she is, joins in this hunt.
The sword name is appropriate for this light hearted tale. 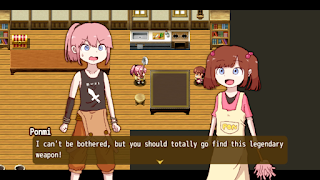 Along the way, Weaco can help some villagers with selfish requests. Often these side-quests will take a turn with dark humor, like an old man who at first seems worried about his adopted granddaughter running away, but just wants to call her a spoiled brat before abandoning her. 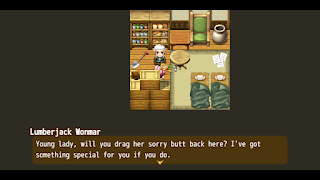 from time to time, Weaco will have flashbacks to her late father. Also, a mysterious voice will speak to her at specific points along the journey. (No spoilers.) All for the sake of her love of weapons of all forms.
Overall, the writing is very simple and focuses more on the humor than the adventure. But, that is a perfect tone for this kind of game.

This is an action RPG and a type of collect-a-thon. As the name implies, almost everything on the map can be used as a weapon no matter the size and this is the main gimmick of this game. These include, but are not limited to, enemies, furniture, items that are otherwise collected, parts of the floor, even bodies of water. Weapon stats, effects, and durability are revealed after using them in combat once and bonus experience points are earned each time.

This gimmick is not only funny in concept, but some of the weapon abilities add to the humor. For example, using a corpse as a weapon as a small chance of instant kill, a refrigerator casts ice magic, and nobody ever questions you taking apart their homes. Enemies can only be picked up for weapons after weakening them without killing them; almost Pokemon like. Doing that is especially satisfying with bosses. There are over 300 potential objects to be used as weapons and an encyclopedia that keeps track of all of them. Everything is breakable, but anything collected once can be ordered over the phone. Plus, there are anvils throughout the world that can upgrade/repair weapons based on the number of crystals you've collected. If you are crazy enough to try and find them all, talking to sheep can guide you to unclaimed weapons; the sheep is also a weapon. 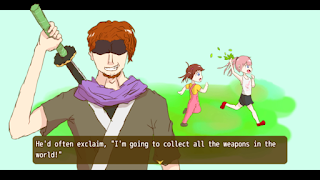 The same weakening and collecting gimmick can be used on friendly NPCs as well, including your sister. This one is a little trickier though because if you stand next to them than you will only talk to them. You will need a weapon with range and one that is weak enough to not kill them because most common villagers have low HP. Better to collect them before leveling up attack power.
Besides fighting with objects, they can also be sold is Weaco and Ponmi's weapon shop. Five items can be placed at a time and it takes between 10 and 20 real world minutes for them to sell, regardless if the game is running. The only other items are herbs that heal you/cure ailments, and crystals used to upgrade your weapons.

Don't worry, everyone re-spawns and nobody holds a grudge.
The main objective of the game is to find the LOL Sword and to do that you need to clear 4 dungeons. These dungeons don't allow you to withdraw weapons from the armory, so you are stuck with what you have or pick up. Each one you clear brings you a step closer to finding the LOL Sword and grands you a new ability. A means of attacking without damaging your weapon, plus other benefits. 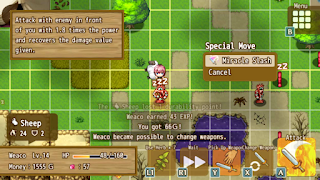 There are also some survival challenges mixed in, but overall is very simple combat mixed with a unique form of arming your self. There are no armor or other equitable items, just weapons and stat upgrades that come with leveling up. A very addictive and fun experience.

There is not any voice acting, but the music very good and fits the adventure theme this game is going for. Granted, there are not a lot of music tracks, but there is enough to fill this small sized game. Sound effects deserve some praise too. For the most part, sound effects are simple; however there are a lot of unique noises used for the various odd weapons. A funny example of this is when using a person as a weapon, they scream with each hit. These can be another fun thing to experiment with. Overall, I have no real complaints in the audio department.

Graphics are a hit or miss. The hand drawn characters for cutscenes are not the best looking, but acceptable. This game is non-linear, you can explore the map freely and tackle dungeons in your own order and the map itself is very well detailed with each area looking different. Sprites are basic, but detailed enough to be appealing. This game looks and feels like an indie title, and that is not necessarily a bad thing. 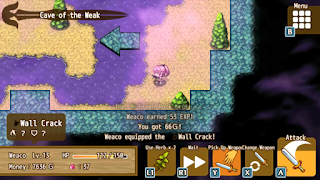 The World is Your Weapon is a very fun and a unique experience that is worth checking out. It is not an expensive game and does not take a very strong computer to run it which gives it the added benefit of being a good choice for gaming on a budget. I will admit to be a little bias since I grew up with collect-a-thons and have always been a big fan of games the encourage completionism over just rushing through the story. But, take this title as you will, it is different and very much feels like someone's passion project.
Writing - 7/10
Gameplay - 9/10
Audio - 5/5
Presentation - 3/5