Here is a flashy little space shooter. I mean that quite literally, there are a lot of flashing white lights along with other nit-picks that hurt what could have been a nice little retro style shoot-em-up. Click "read more" for my full review.

The game is a very straightforward concept, shoot the baddies, collect power ups, survive waves, and try to get as high a score as possible before you beat the game or lose all your lives. 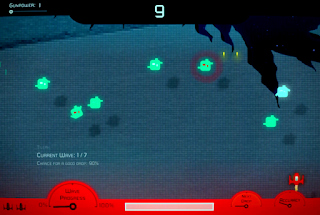 Immediately, I have to take points off for the game lacking any auto-fire or even a rapid fire power up. Your hand will get tired from mashing the shoot button. This is not due to a controller, the same issue is present when playing with keyboard and mouse.
It is a very straightforward objective, survive the waves of each level and shoot down as many enemies as possible along the way. Points are awarded based on kills, accuracy, power dodges, and how many mystery power ups you pick up. There are power ups that appear once in awhile that are very helpful, but sometimes they are actually penalties. This is where those mystery ones come in as they are a gamble. 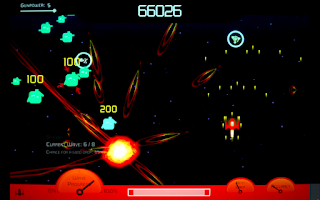 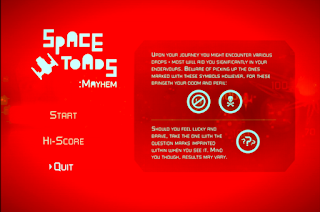 Beating the game unlocks a harder difficulty. But, even on the Normal mode, it is quite challenging, but not unfair. However, the ship is slow which can make evading enemy fire rather annoying. Especially in later stages. Your laser powers up with enemies defeated, up to level 5. This power up increases the ranger of fire and damage. But, getting hit causes the level to reset to one. 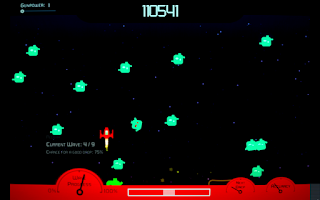 Many times when you defeat an enemy or use a power up used, the screen does a lot of flashing. It didn't bother me because I'm not epileptic, but I can see how a lot of people can get a headache from it.
I am hoping the low quality will make this watchable.

I can appreciate the game trying to be eye candy, but the fact that it does not include any warnings for flashing lights is an issue. Granted, they aren't strobing, but there are people with sensitive eyes that play games and I could not tell how safe this is for them.
Overall, gameplay is almost a solid experience. It may seem like nit-picks, but the lack of auto-fire, slow moving ship, and the flashing lights can really turn some players off. If you can manage that, this is a competent space shooter for an affordable price.

The music in this game is great. Rocking tunes that fit great with the action. Sound effects are solid too. There is not much that was needed to get solid audio for a simple game like this, and it nails it. No complaints.

This is an odd topic to cover for this game. I already mentioned the flashing lights being an issue, but another strange issue is that I could not find anyway to put the game in windowed mode. I know there are tricks to force games into windowed mode that don't have built in support, but a hack existing to fix a problem does not excuse the problem's existence.
Even without those problems, everything looks very basic. The ship is generic, the enemies look like balloon ghosts, and the backgrounds arrange from stock to confusing. 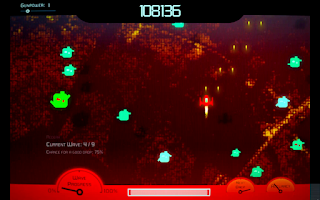 I will at least say, the power ups look awesome and it is still satisficing when enemies explode. To sum up, presentation has its flaws, but if your eyes can handle the flashing than it is acceptable enough.

Space Toads Mayhem is a game that is both hard to recommend, but hard to call bad. There is a lot of stuff that makes this game a solid space shooter. However, the few but notable flaws can be a big discourager for a lot of people. I don't enjoy complaining so much about the flashing lights; it is clear the game was just trying to give a cool spectacle for players and it succeeds for anyone whose eyes aren't bothered by the flashing. There are other issues, but everything else is mostly manageable. So, if you are a big fan of shoot-em-ups and don't reacting to flashing white lights, than I do recommend this title. For anyone more sensitive, maybe look elsewhere.
Writing - n/a
Gameplay - 6/10
Audio - 4/5
Presentation - 2/5