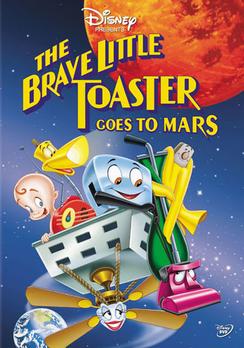 You all had to know that this was incoming.

I cannot believe that that is actually a thing.

And yet, The Brave Little Toaster goes to Mars is a very real entry in the franchise. From traveling the American wilderness to the vast reaches of space, Toaster and his friends sure have gotten far in their mechanical lives. And this film would also mark itself as the last performances of DeForrest Kelly, Thurl Ravenscroft, and Carol Channing. Quite a piece of notoriety for such an...eclectic film.

I grew up watching this film quite a few times and can remember quite a bit of the story, even before my rewatch. It has a presence in my childhood, however minor. And as you'll be able to tell, that presence was weird then and its weird now.

A few years after The Brave Little Toaster to the Rescue, Rob and his wife Chris give birth to an inquisitive new baby that our appliance protagonists called "Little Master". They are all excited for the new baby, but when the Little Master gets caught up in the plans of an irascible hearing aid that seeks to leave the Earth for Mars and ends up abducted, it will be up to Toaster and all his friends to travel to Mars and retrieve the baby.
Along the way, they will meet many weird and eccentric characters, both old and new, and uncover a plot to destroy the Earth by a group of appliances that seek vengeance for their planned obsolescence. So not only must Toaster rescue Little Master and get back to Earth before Master Rob discovers their baby is missing but also must save the Earth from a vengeful refrigerator named Supreme Commander.

Going to be totally honest with all of you. I don't quite know what to tell you guys about The Brave Little Toaster Goes to Mars that you cannot already kind of gather from its circumstances of production. It is direct-to-VHS film created in the late 1990s, right as the Disney Renaissance was coming to an end and the age of the cheap Disney sequels was right around the corner. It was made at the exact same time as its prequel The Brave Little Toaster to the Rescue, despite actually being released before it (which results in some really weird narrative plot holes if you watch the films in release order rather than chronological order). It's also based off of a sequel book written by the author of the original Brave Little Toaster book, Thomas M. Disch.
All of which, when combined with the plot and the animation, make this one of the weirdest sequels, Disney has ever been involved with.
And that is honestly saying a lot.
I really have no choice to start with the plot because is kind of the big neon sign which likely directs an audience's attention. A group of appliances travel to Mars using a ceiling fan tied to a laundry basket and powered by a bag of microwave popcorn in order to save a human baby from a band of broken appliances that seek to destroy the Earth, led by a embittered hearing aid masquerading as a giant refrigerator. And they have to do this all in a single night before the parents of the baby realize that he is gone.
Along the way, they meet a group of balloons that travel through space after being lost by children all over the world (singing the best song in the whole movie), the Viking 1 spacecraft who is bitter about being built to be abandoned on Mars and a little Angel Christmas tree topper who was stored on board his lander as a prank who desires nothing more than to top a Christmas tree.
It all adds up to be incredibly surreal to watch as an adult, but I remember really liking this movie as a kid, even if the "destroy Earth" subplot is ended by essentially a spontaneous and convenient election by the various appliances. I think the film's generally child-oriented audiences and incredibly short runtime (clocking in at barely over an hour and ten minutes).
I also have a serious nitpick with the inclusion of Wittgenstein from The Brave Little Toaster to the Rescue. It makes sense given that this film is the third film in the trilogy, but it was released almost a year before the film that introduced Wittgenstein which resulted in many kids, myself included, being completely clueless as to the inclusion of this random mysterious character who essentially pushes the entire plot forward.

Thinking on it, this really does hurt the film overall and is a major failure from a production standpoint.
As an adult, I am mostly drawn to this film by its nostalgia factor and the generally good emotional beats, even if they feel a little hollow when compared to the original and its first sequel.
I think that's actually what I am most disappointed about this film is that the film sort of lacks the same level of emotional maturity and silent contemplation that made the original The Brave Little Toaster so much of a standout. The film feels a need to add consistent noise and most the cast have very little to do beyond support Toaster on the various exploits and because its obvious that they can't split them up. It just feels smaller, despite the fact that it takes place in the vastness of space.
It also doesn't help that the animation and visuals are kind of lackluster. The actors do a fine job with their lines when they have them, but the animation feels rushed, flat, and oftentimes the characters look completely dead when they aren't talking or participating in the plot. The Brave Little Toaster to the Rescue had this problem too, but it was able to better involve all the characters and had enough memorable scenes and emotional beats to sort of mask those flaws.
Like its immediate predecessor, the film has musical segments. But the selections here are much thinner than in the previous film and they just don't have the same level of...oomph, I guess. I'm actually hard-pressed to remember any of the songs without prompting beyond "Floating" (and even that is largely because I remember the silly balloon stereotypes on display). It's just a shame that the musical selections ultimately do little to impart the emotional complexity and memorability like the previous films.
I want to like this film, I really do. It's not terrible by any stretch of the imagination. I have seen worse animated films, dumber stories, and ungodly musical selections. This has none of those, thank god. It just feels a little uninspired or overly childish. The Brave Little Toaster Goes to Mars has none of the dark whimsy and sense of scale that the original The Brave Little Toaster possessed, nor does it quite have the emotional heart and catchy songs of The Brave Little Toaster to the Rescue. It just feels a little too immature, a little too rushed, a little too contrived.
When I first started looking at the trilogy, I thought for sure that The Brave Little Toaster to the Rescue would be the weakest of the three films. But upon further reflection, I realize that that film has a more involved story, a greater use of its characters, catchier music, and was much closer to capturing the dark and twisted elements that made the original film so memorable. The Brave Little Toaster Goes to Mars just ends up looking like a slightly above average Disney direct-to-VHS sequel. Fit to put on when you need to entertain a toddler for about an hour. I honestly can't remember as much of this film as I hoped that I might.
Like so many trilogies, the final installment really seems to be a bit of a disappointment. Not terrible, just unmemorable.
VISUALS
SOUNDTRACK
CHARACTERS
STORY