A few weeks back, I took a look at a classic "video game" of my childhood in Microsoft Dangerous Creatures, an interactive encyclopedia released in 1994. I adored this program immensely as a child as it helped to foster a passion for biology and the natural world. It's beautiful pictures and interactive guided tours were enough to stir the mind of an impressionable child to the wonders of the animals which now inhabit the world.

But what if I told you that Microsoft also released another interactive encyclopedia in the same vein, this time focusing on the lifeforms which called Earth home during the Mesozoic Era. Released in 1993, the same year that Jurassic Park revitalized public interest in dinosaurs and revolutionized our visual perception of them, Microsoft Dinosaurs attempted to capture that same degree of wonder through education and exploration. As I was a massive dinosaur nerd as a kid (and still am in point of fact), this was probably my favorite of the two encyclopedias.

But does that love hold up after all these years? Or has Microsoft Dinosaurs not aged as well as it should've, when compared Microsoft Dangerous Creatures?

***
First thing to note is that Microsoft Dinosaurs is organized in a manner very similar to Microsoft Dangerous Creatures (or I guess its the other way around since time is a linear construct with clear delineations between cause and effect) so if you are familiar with that setup from either your own experiences or my review of that game, Dinosaurs will not be difficult to figure out and operate.
The encyclopedia is split into several subsections which help to navigate and explore its various articles. These subsections include Atlas, which highlights several notable dinosaur species and subjects by region. Timeline which shifts the focus towards what creatures lived during the various points in the Mesozoic era. Then we have Families which divides dinosaurs up by their specific lineages and related species. Then the Index which simply lists all available articles in alphabetical order. Lastly we have the Guided Tours and Dinosaur Movies which had a degree of interactivity to the rest of the encyclopedia and where I will turn my attentions to first.
The comparisons to Microsoft Dangerous Creatures is kind of unavoidable, as it too has guided tours, where a character or voice actor guides the viewer through a selection of articles about a particular subject with narration and humorous or informative dialogue. In Dangerous Creatures, there were three characters with their own unique personalities and focuses that helped to give a wide exploration of the complexities of modern life on Earth in 15 guided tours. Dinosaurs had a much simpler approach to their guided tours.
Rather than fictional characters, the guided tours were voiced "Dino" Don Lessem, a famous writer, specializing in dinosaurs who might be more familiar now a days for his creation of the "Dumping Trump" robot that popped up at anti-Trump rallies in 2019. Lessem provides an immensely refreshing narration that is filled with equal parts humor and educational professionalism. You can really hear his enthusiasm for the subjects and the degrees of almost child-like whimsy at which he thinks of this lost time in Earth's history, as he takes us through a total of 16 guided tours about a myriad of different subjects that were at the cutting edge of scientific thinking about dinosaurs in the early 1990s (which was the beginning of something of a scientific revolution in field of paleontology).
The guided tours were always fun and really enabled the viewer to get a good general view of everything the encyclopedia had to offer, especially the wonderfully creative art that is on display on every page; even if the dinosaur designs to feel a bit outdated (more on that in just a bit). But they were only first half of the interactivity that Dinosaurs had to offer. Next we had the movies, and these were a real treat.
The six films on display were mostly short narrated animations taken from a PBS documentary series that was airing shortly before the release of Dinosaurs. These are all fun, if short, looks into a dinosaurs daily life or the theories that were prevalent at the time regarding the mass extinction of the dinosaurs. But if I had to highlight one movie in particular, it would have to be the copy of Prehistoric Beast, a ten minute long experimental go-motion film created by the legendary Phil Tippett (the claymation artist behind Robocop and the infamous "Dinosaur Supervisor" for Jurassic Park). This film is incredible to watch and was unlike anything that I had ever seen done with dinosaurs when I was a child. It definitely leans much more towards a horror angle, especially the last few moments. I was genuinely terrified of this movie as a kid, so good on them for that. 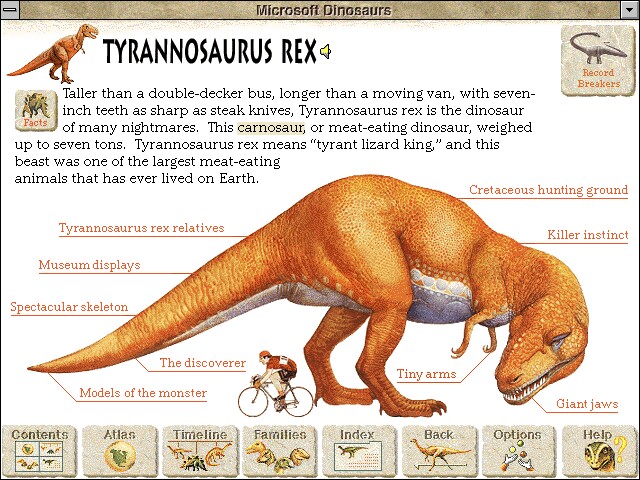 Now on to the elephant in the room. This encyclopedia is, unfortunately, woefully out of date. The cool thing about Microsoft Dangerous Creatures is that, for the most part, the animals alive in 1994 are the same ones alive in 2021 and we can analyze and study their behavior directly. But with dinosaurs, our understanding of these creatures is always shifting with the latest scientific discoveries and new interpretations of existing theories.
As such the dinosaurs and ideas presented in this encyclopedia are really applicable except as a window into what we thought of dinosaurs in the early 1990s, although even as a kid I noticed an extreme difference between the look of the T-Rex in Jurassic Park and the one in the Tyrannosaurus article, so it might be better to call this a window into paleontology in the late 1980s. This isn't a terrible thing, but it does affect just how accessible this program may be if you go looking into it again. With a proper emulator, Microsoft Dangerous Creatures is just as informative now as it was back then, though it doesn't have quite the same understanding of climate change that we do (that's understandable). But Dinosaurs has no mention of feathers on dinosaurs, it only briefly discusses the then new theory that dinosaurs and birds were related, and even the asteroid that wiped out the dinosaurs is treated as general conjecture or a wild theory.
Ultimately, the program is a product of its time and offers a unique window into the field of paleontology from that time. With a humorous and witty explored and guided tours, and masterful uses of artwork, I think that this program would be wonderful if it were remastered for modern technology and could possibly even be updated with new discoveries over time (though the age of Wiki's has largely replaced and outdated interactive computer encyclopedias). Microsoft Dinosaurs played an enormous role in feeding my dinosaur mania as a child, no more than Jurassic Park did. As such, it will always hold a soft spot in my heart. I might even go and find a good emulator and check it out all over again.
***
I would like to thank my monthly Patrons for their support of all of my content. You can join my Patreon for Behind-the-Scenes, Polls, and other fan interactions here.
MONTHLY PATRONS
Cendoo
Posted by The Brony Critic at 6:27 PM