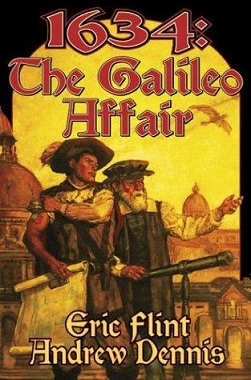 I have covered several books in the 1632 series on this channel and made plans to review the rest of the series, even possibly including single reviews of the anthology stories found in the Grantville Gazettes. While I contend that the series is overall very good and remains my favorite series of all time, today's book stands as the first in the series that I'm not super crazy about. As I will explain in the review proper, this is the first book in the franchise that I don't go out of my way to read when the re-reading begins.

1634: The Galileo Affair was published in April 2004 as a collaborative work between lead series writer Eric Flint and Andrew Dennis. Narratively the book reintroduces characters established in "To Dye For", "Between the Armies" and "A Matter of Consultation" from the first Ring of Fire anthology book, as well as a few stories from the first Grantville Gazette, and begins the so-called Southern European thread of the 1632 series.

The story tells the tale of the Stone family, Americans from Grantville, who move to Venice in order to help teach the "modern" Europeans about American medical practices while also working to open up a trade route to the Middle East. Whilst in Venice, one of the younger Stone's gets involved with the daughter of a local political firebrand who has become a fan of American political philosophy and gets wrapped up in a plot to save Galileo from his religious trial in Rome, being presided over by the pope himself. Little do they know that an assassin is planning to use the scheme as a way of killing off the pope in the name of Protestantism, all while the pope is caught in a conundrum over the theological impact of modern Catholic doctrine coming through the Ring of Fire and how this should impact the future of the church.

When you begin reading the 1632 series, you very quickly begin to pick up on the unique writing voices of its many writers. The influence of Eric Flint does tend to mitigate many of the stranger ideas that might be uncharacteristic of the franchise as a whole, but this overall ensures that every entry in the series has its own identity and thematic focuses.
In terms of Andrew Dennis, he seems to have a mind for theological doctrine and loves to explore the philosophical impacts of time-traveling modern Americans to the 1630s. This is a trait that was seen in the earlier Ring of Fire anthology story "Between the Armies", which covered the specific theological implications of fighting witchcraft and how modern Americans would deal with the practices of the 1630s. And it plays a central theme in 1634: The Galileo Affair as the theological concerns of Father Mazzare that are touched upon in 1632 finally come to a head, as his presentation of the Second Vatican Council reaches the ears of Pope Urban VII.
While this does help the reader to fully appreciate the implications of what is being discussed, the nature of Catholic canon law can be a little dense and dry for most people (and this is coming from a lapsed Catholic/agnostic) and thus limit a bit of the potential readership. Thankfully, Flint and Dennis overcome this by introducing readers to this mindset through the equally ignorant eyes of the Stone family, a family of American hippies that by circumstance revolving the introduction of tie-dyes into the 1630s, have become among the wealthiest citizens in Grantville. The Stone's are well-meaning and likeable with very reasonable motivations for why they want certain things. This also means that they often need context explained and act as a perfect slates for the audiences questions to be answered and to keep the narrative on track.
And that narrative is actually constructed very well. While the story does follow the Stone children predominantly and their association with the Venetian branch of the Committee of Correspondence, an organization of pro-American rabble-rousers, there is also an underlying spy plot involving a dead American reporter and a cabal of French Protestants who plan to use the Americans to destabilize the Catholic world. These two plots are woven quite seamlessly into the underlying overplot that is the question of modernization within the Catholic Church and what role the miracle that is the Ring of Fire should play within interpretations of Catholic doctrine. If you can get through some of the denser moments of Catholic doctrine and policy, the narrative is quite intense and leads to a thrilling conclusion.
Where this book does kind of fall a little flat is that it feels somewhat incomplete. While many books in the 1632 series have loose plot threads to be explored in sequels, 1634: The Galileo Affair in many ways feels like a Part 1. The story is almost immediately followed by 1635: The Cannon Law and 1635: The Papal Stakes, which I will likely cover in the future, and those books continues the story and arcs of nearly every character introduced in this one. It really feels like the book is more an introduction to a larger storyline than its own self-contained story, which is somewhat dissapointing.
Thankfully the storyline that 1634: The Galileo Affair begins is interesting and engaging enough that I can kind of forgive it, though it will take a slight hit to its overall score because of it. In summation, 1634: The Galileo Affair is a fun pseudo-spy thriller set in the universe of 1632 that kicks-off one of the most engaging and potentially impactful arcs that the series ever covers, as the very future of Catholicism hangs in the balance.