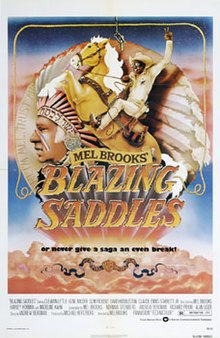 Comedy films, in my opinion, have always been difficult to objectively review due to the inherently subjective nature of comedy itself. Not everyone finds the same things funny. However, there are aspects and themes that a comedy can touch upon that help to transcend it beyond your average run-of-the-mill kneeslapper into a piece of historically significant art. Today's film is one such piece.

Director Mel Brooks 1974 satirical Western Blazing Saddles has become almost legendary as "the film that could never be made today" due to its heavy racial themes and subjects. As I will go into further detail, I believe who make this claim are missing something very fundamental about the film that helps to elevate beyond a simple parody of Western films into an entire critique of American race relations as portrayed in media and the very notion of American exceptionalism that is exemplified in the Western genre as a whole.

For how crass and vulgar the film was then and now, it is easily one of the smartest and most subversive comedies that has ever been made and, in my opinion, represents the absolute best of what Mel Brooks could do directorally and what film parody can become. I love watching and referencing this movie often and was extremely excited when I realized that I could review it. So here we go guys...the most controversial film I've reviewed thus far, Blazing Saddles.

In 1874, the corrupt territorial attorney general Hedley Lamarr desires to destroy the town of Rock Ridge to make way for a profitable railway line. In order to force the town to acquiesce to his demands, he sends a gang of ruffians to kill the local sheriff. When this doesn't force the stubborn and racist townspeople to pack their bags, Lamarr works with the territorial governor to appoint a new sheriff to the town that is so offensive to the people's sensibilities that they will be happy to leave the town.
Thus is Bart, a black railroad worker about to be executed for assaulting the leader of the gang of ruffians, appointed to be the sheriff of Rock Ridge. Bart now has to team up with the notorious gunslinger known as the "Waco Kid" and employ all manner of cunning tricks and deceptions to save the very ungrateful people of Rock Ridge.
***

The modern parody film is a shameful shadow of its former glory. The 1960s and 70s were a golden age for the genre of satirical comedies with films such as Airplane, Young Frankenstein, Spaceballs, and, of course, today's review choice, Blazing Saddles. And Mel Brooks was, in many ways, the champion of that golden age, as three of the four films I named were of his making. Mel Brooks has entered the history books as a legendary comedic filmmaker, but I truly think that most people don't understand fully just how clever and subversive Brooks' films really are. And of all his films, none are victims of this more than Blazing Saddles.
The film is, in short, an absolute comedic triumph, easily standing as one of the funniest and most poignant comedic satires ever made. In fact, its satire is so subtle and scathing that I think most viewers completely miss the thematic criticism at the heart of Blazing Saddles hidden behind the fart jokes and innuendos. I'm not being hyperbolic either by stating that the film is almost blindingly smart in its criticism of American culture.
And comedy is, at its heart a criticism of something. Comedy is the art of using humor to point out an aspect of society and comment on it by tearing it down. Whether this comment be about the use of language, as is the case of "foul language", or about the absurdity of some political idea or societal foible, in the case of political humor; comedy is the art of deconstructing an idea and re-contextualizing it to a viewer in a new, often humorous, light. Blazing Saddles uses the medium of comedy to comment on race relations in America as portrayed in our media as well as critiquing the tropes of the Western genre. 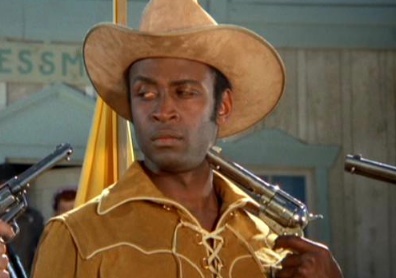