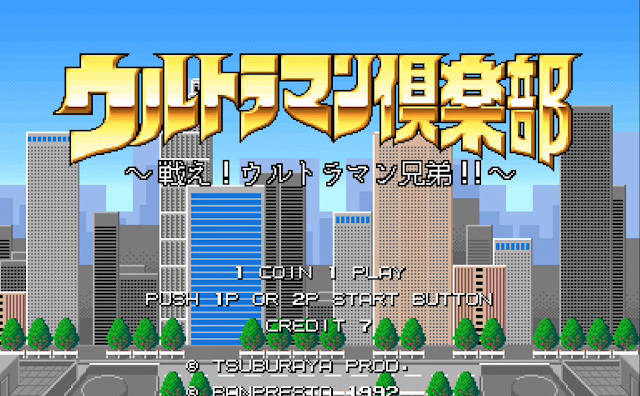 It's about bloody time that we've covered something Ultraman related on this site.  Nope, it's not an episode from one of the television series.  (That job is reserved for UltraSam AKA Candy Cane Diamond.)  Instead I dive back into the amazing world of Tokusatsu arcade games.  This is Ultraman Club - Tatakae! Ultraman Kyoudai!!  It sounds exciting.  (Click on "Read More" to read the full review.) 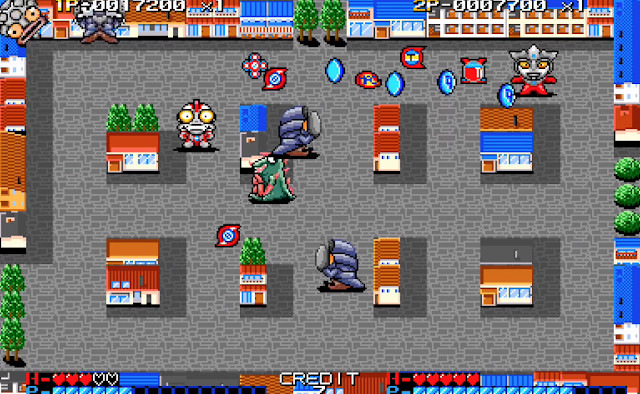 Believe it or not, there's a story in this game.  Sadly, I don't understand a single bit of it (well, not yet at least) because it's all in Japanese.  From what I can gather, going on by the cut-scenes, there's nothing much to understand.  You are an Ulltraman and your job is to put a stop to the pure evil that is invading the game.  How?  Go to the next section to find out, you silly goose. 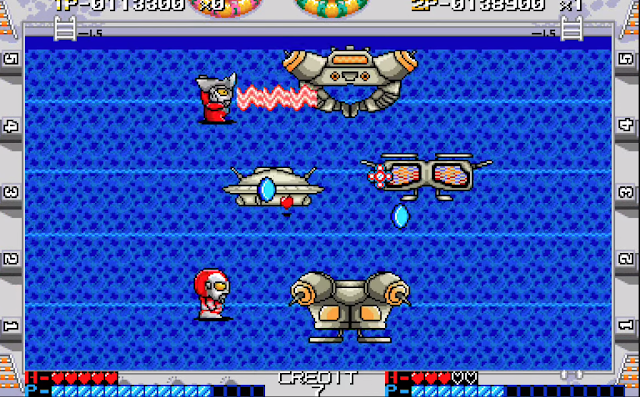 If you are expecting a high impact action game, you're best to look else where.  Ultraman Club - Tatakae! Ultraman Kyoudai!! (yes, with two explanation points at the end) is a top-down arena shooter where you get to pick one of eight Ultramen.  The goal is to defeat all of the monsters on a stage and every sixth stage will have a gigantic boss fight.  The boss fights are cool, but the rest of the levels aren't as fun as they should be.  The concept isn't bad, we've seen this kind of game done before and really well in Smash TV.  Sadly, the gameplay here is very underwhelming as it is incredibly boring.

Controls are very simple and mainly confident if not a little loose, especially when trying to make precise attacks while running.  You walk around with the joystick, fire a laser with one button, and perform a special attack with another button.  The special attacks are super strong and are worth using.  In order to perform this special attack, you'll need to fill up a special bar.  You can fill up the bar by picking up special items or by using a weird shield attack by pressing attack and special at the same time.

The level lay out and monsters could've been so much better.  I had no fun walking around the stages, nor attacking the monsters.  Neither do the monsters for that matter.  The AI is very lazy, but not lazy enough to where the monsters won't attack you.  They put down as minimal effort to attack you as possible and this makes this game very easy by arcade standards.  The only time they were a real threat was towards the end of the game and that's because they throw in a ton of them to fill up the stages.  Even a guy who stinks at these kind of games could beat this in less than ten credits.  With eight of those being wasted on the last few stages and bosses.

The baddies won't go down in one hit unless you are using a special attack.  This is not a problem and helps to add some challenge to this game.  I do like how some enemies will react differently to getting hit.  Some will be stunned, while others will multiply.  Wait a second.  That's it.  Yeah, nothing much going on with the baddies which is a shame as there's quite the variety of them and it just feels like a wasted opportunity.  The boss fights however are the best thing about this game.  They are huge and they actually do something.

Destroying monsters will shower you with items to pick-up.  Most of them will just give you some points.  There are some that will power you up.  The best power-up in this game summons a squadron of jet planes to bomb the monsters on the field.  It's a rare item, but a good one. 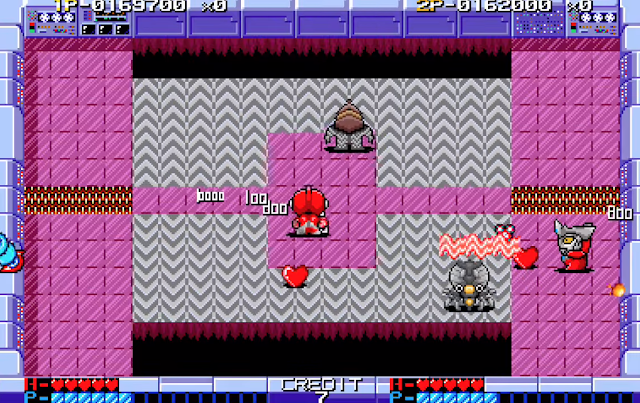 The graphics aren't good, nor are they bad, they are just very average.  The sprites are the best thing about the graphics.  They are charming and full of character and I am very impressed with the amount of them.  There's quite a lot of variety in them, with each world having a different set of enemy sprites.  The big giant boss sprites are also really cool looking.

The rest of the graphics have nothing much that I can say about them.  They are themed with stuff such as: Swimming pools.  Outer space. Plus a very weird magic eye picture styled world where you have to look hard to see where the walls are.  Sure, this sounds really cool and exciting, but they aren't.  The coloring and animation is bland and boring. 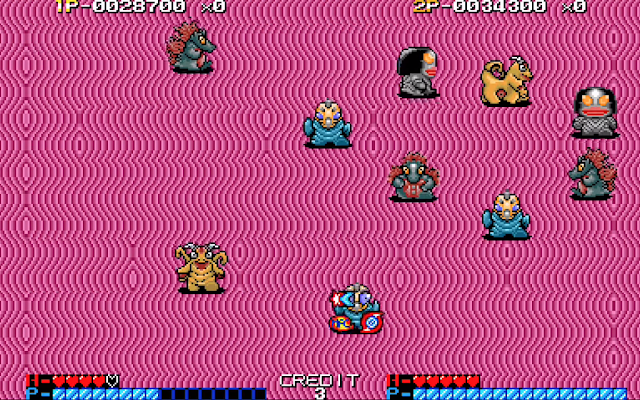 The soundtrack is incredibly infuriating.  It tries to capture that grand tokusatsu feeling, but it fails big time.  It sounds like a Super Nintendo game that has been sealed up in a tin barrel and thrown into the ocean.  It's as annoying as it sounds and you'll want to jam something in your ears.  The sound effects are just as bad, however I did enjoy the very grainy voice samples taken from the television series. Overall, this game is proof that not every thing released in the arcades is gold.  It's a really boring action game that will suck the fun out of any party.  Avoid this one if you can, unless you are a tokusatsu video game fan and in that case, you are used to really boring, sub-par action games.  This gets a four point five out of ten.  4.5/10 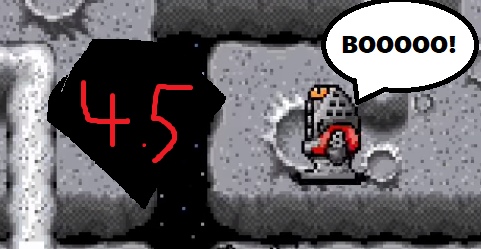 Posted by Retrokaiser at 9:30 AM