Behond, the original choice for the first Power Ranger season that was denied due to rights issues. Chojin Sentai Jetman which roughly translates to Birdman Squadron Jetman. Released in 1991 and inspired by another japanese show, Kagaku Ninjatai Gatchaman, this season promises flying. Click "read more" for my full coverage. 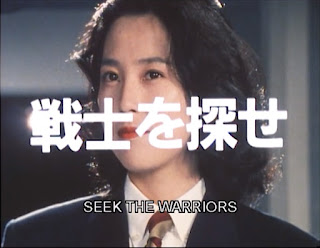 The episode begins with an announcer explaining the setting. In the year 199X, Sky Force's Earth Ship is orbiting the Earth where a team works to maintain peace on Earth. 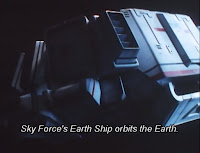 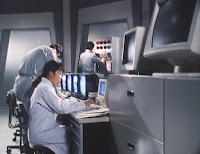 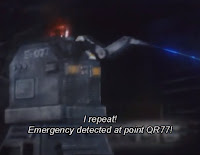 Then, an emergency happens where an assistant robot goes out of control and begins attacking the ship. That escalated.

This sudden danger prompts the entrance of two Sky Forcers to come in on motorcycles in order to deal with the situation. Sky Forcer W6 Ryu and W3 Rie.

During the attack, a lady trips and accidentally throws her baby which prompts Rie to turn around and catch it in mid-air. How cliche'. Ryu rides his motorcycle towards the rampaging robot taking many laser shots in the progress. Eventually, he is able to turn the robot off, saving the day. Rie rushes over to congratulate Ryu and kiss him on the cheek. 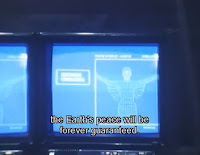 Ryu and Rie both get recommended to become part of the Chojin Sentai as a result of this success. A process of being exposed to "Birdonic Waves" in order to obtain superhuman strength.

When thinking Superhuman strength, the first animal that comes to mind is always birds. What else could fit such a description?

They agree on the condition that they are still allowed to be a couple after becoming Jetmen. Aww.

Rie and Ryu are now lined up with 3 unnamed others to become Jetmen one at a time. Ryu goes first. The process is painful and causes a bunch of images of bird to flash before his eyes, but it is a necessary process. 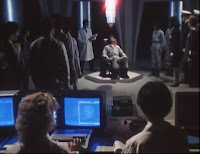 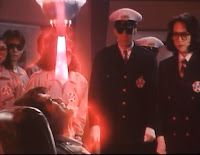 Guess what color he is going to be.

Sadly, before anyone else can get a turn with the Birdonic waves, a scary face appears before everyone. We will never know what color Rie would have become. Although, judging from her motorcycle, considering Ryu's was red, she may have been Green Eagle before the manga. 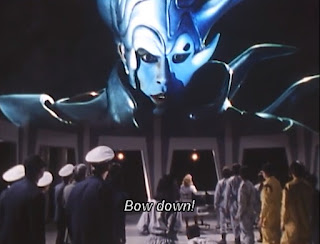 This head declaise his kind as "gods" and his image appears everywhere on Earth from the sky, to T.V.'s, inside coffee cups, and even the mirrors in the women's bathroom. The message is clear, they are called the Vyram and are coming to seize control of Earth.

These threats are an annual tradition and will never alert any past Sentai team.

Drama immediately builds as Vyram states it will destroy the Earth ship in 1 minute to demonstrate their power. Now, evacuations begin. Every part of the ship starts to explode while Vyram comments about how much they have conquered and the new world they will create. Things go especially bad when a whole in the wall blows that sucks Rie out. Ryu tries desperately to pull her back in but the vacuum of space is too strong. 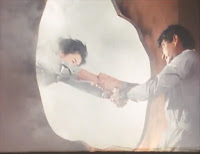 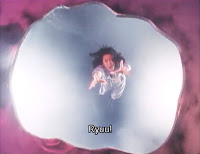 But, why was Rie the only one to get sucked out? Everyone was equally as vulnerable.

Ryu tries to go after Rie but is knocked out by Commander Aya (the lady who chose them to be Jetmen) and carried off to safety. The ship blows up with Ryu and Aya flying off in an escape pod. No one else's fate is shown. While the ship blows up, the Birdonic waves end up hitting 4 other people on Earth by accident. 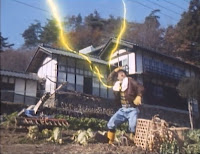 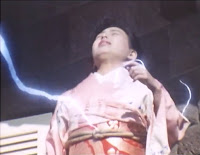 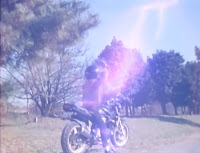 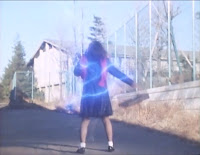 This is how the team is formed. One seasoned professional and 4 random civilians. 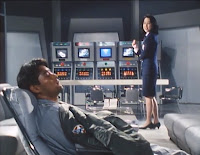 Ryu wakes up in the "Sky Camp" which is a secret base built for the Jetman team. His first instinct is go look for Rie, but Commander Aya slaps him and tells him that Vyram has killed her. Aya goes on to tell Ryu that he now needs to fight Vyram and gives him a changer. Now, they are off to find the other 4 Jetmen. 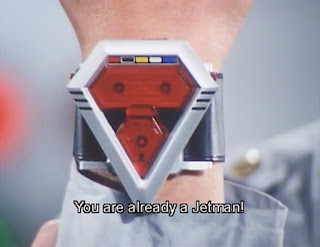 Interesting how they both knew that the Birdonic waves fired on it's own and that it hit exactly 4 people. Honestly, this is not a good setting for a team formation. The other four were not chosen ones, they did not sign up to fight, or even have any noticeable talents. Just pure random luck.

But, before the team meets, we get to see our first monster of the week. A bug like creature that seems to make people disappear, but leaves their clothes behind. It is implied that everyone taken gets placed into the Bug monsters egg sacks. 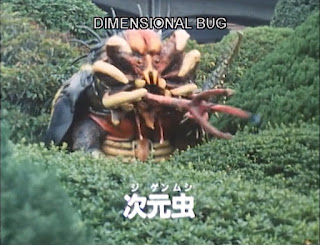 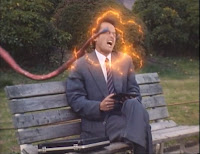 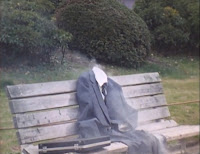 Never forget how terrifying these monsters from older seasons were.

Meanwhile, Ryu and Aya track down the other Jetmen by scanning the birdonic waves. Everyone responds differently to the call for arms. 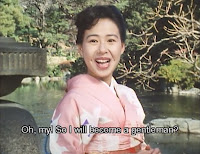 Kaori is the first to be recruited. She is a rich heiress and very kind & polite. It does not take much to convince her to fight because she was always hoping for something to come along and allow her to fly away from her "boring life". 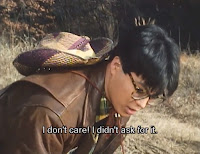 Raita is the second one found but initially refuses to join the team due to his hatred of violence and wanting to remain doing what he loves as a vegetable farmer. Kaori stays behind with him to try and convince him to join while Ryu and Aya go looking for the last 2 members. What ends up making Raita want to fight are when some of this season's grunts, the Grinam Soldiers, appeared and started smashing his crops. 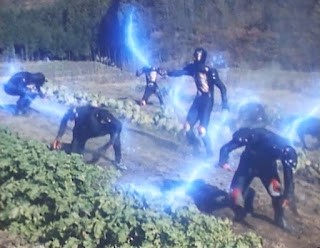 After a short struggle against the Grinam Soliers from Raita and Kaori, they call Ryu for backup. Ryu rushes to a bunker where he pilots one of the Jetmen mecha.

Bit excessive for grunts. They also skipped the part where it was established they even had those jets.

Ryu flies into the battlefield and blasts the Grinam Soldiers and the bug monster. When did the monster get there? Then, for some reason, he ditches his jet in order to join the fight on the ground. 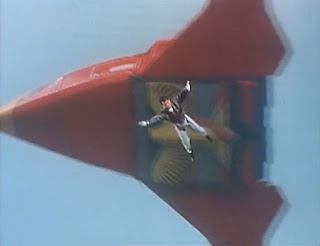 I sure hope that thing can find its way back to the bunker by itself.

Now, Ryu henshins for the first time and takes flight. 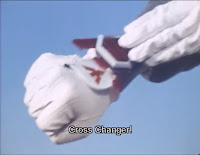 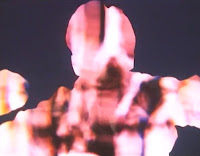 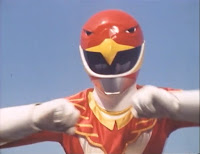 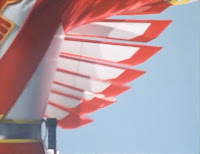 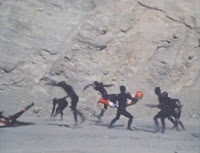 Yup, these Rangers can just fly.

Ryu lands, begins the more classic fighting, and throws a changer to Raita.  They really aren't giving a choice to join or not. However, Raita and Kaori don't henshin but instead make a run for it. Unfortunately, they cannot escape and get blasted off a cliff by the Grinam Soldiers. While they fall, Ryu contacts them with a radio in his helmet and instructs them to push the button on their changer. Thus, 2 more members of Jetman are born. 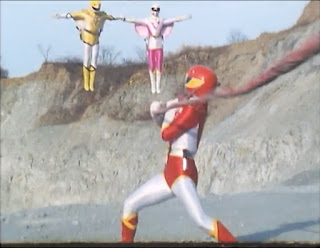 For the record, that is considered a White Ranger not Pink.

The two new Rangers fly to safety until Raita loses control and falls out of the sky. However, the Jetmen quickly regroup and the battle begins again. Ryu does most of the work as the inexperienced other two Jetmen just fumble around mostly. Between that and lack of real resistance from the Grinam Soldiers, this fight is pretty underwhelming.

Once the grunts are defeated, it is time to take on the monster. As tradition dictates. Raita and Kaori just hide behind Ryu whom once again does all the fighting. After the monster takes a few solid hits from Ryu, the enemy leader cuts open a portal in air to retreat it.

Since when do villains know how to do tactical retreats?

After the monsters' retreat, Commander Aya tells the Jetmen that until they find the other two members, they cannot fight against Vyram.

Back at the Vyram's HQ, we now get a rundown of all the main villains. 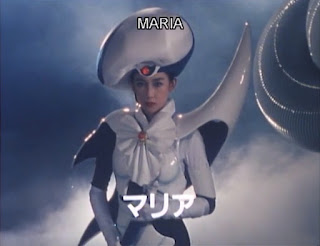 The episode ends with teasers that the last two Jetmen will be shown on the next episode. Even though they already showed them in the theme song.

This episode was so so. It did everything it needed to in order to introduce the series, especially considering that it is the first of a 2-parter. However, there are one too many things that don't make sense. First off, why was Rie the only one who got sucked into space when everyone was well within range? Second, where did their mecha come from? Third, I still cannot accept the fact that 4 of the Rangers are just regular people who randomly got hit by the beam and so far have shown no competence in combat. Lastly, they completely ignored the fate of everyone else who was on the Earth ship? If they all died that could have been good character motivation, but nope.

Combate was weak and acting was just okay to boot. A big problem I have noticed with these older seasons that only have a 20 minute runtime instead of the standard 24 is that they tend to skip key moments. I am not sure if that shortened time was just standard for 90s Japanese TV, but it has negative results either way. OVerall, this is not the one of the worst episodes I've seen, or even the worst first episode, but it leaves a lot to be desired and I am not overly impressed. But, maybe part 2 will change that. 2/5
Posted by Cendoo at 12:00 AM