This is a game that was gifted to me as a joke on Steam and has since disappeared from the store. A game so simple it does not even have a title card. Click "read more" and prepare for one of the simplest reviews ever. 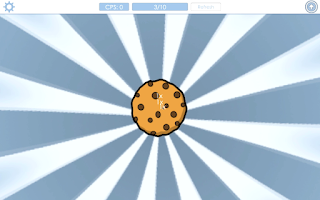 There is a 10 cookie limit; but, everytime you click "refresh" you exchange all your cookies to increase the limit by the same amount. Once enough cookies are gathered, they can be exchanged for items that will automatically add cookies every second and power ups for those items.

Upgrades are all a one time purchase but the items can be bought in sacks with each additional costing more. The two item menus scroll at an extremely uncomfortably slow speed.

And that is it, the game will keep going until you have decided that you have collected enough cookies/money. 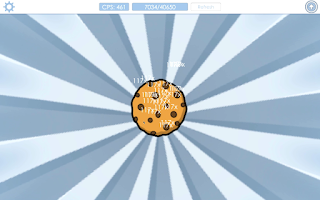 This whole game is one screen plus menus with the goal of making a number increase. Most likely, this game was made as a joke or perhaps it is a mockery of the microtransaction obsessed mobile games. Either way, this is one the most brilliant and awful games I've ever encountered.

There is one background track in the game that loops and it sounds very stock. Interestingly, the only settings you find in this game is muting the audio. 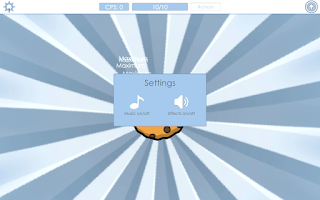 What's interesting about that is that the only sound effect I found in this game is when you try to buy something you cannot afford and the game makes a fart noise.

The game is one menu with stock images, some menus, and no title screen. Nothing else to say.

I don't really know what to say about this, obviously this game is not good but even more obviously it was never intended to be so. Personally, I would really love to know the backstory behind this release, but it seems to have been something that just appeared and disappeared without much trace. If you want to use this as a comparison to games that have you grind for hours if not days all for the sake of increasing a number, then this game can be viewed as a brilliant metaphor. However, this could also have just as easily been a troll game released as a joke. Who really knows and since this game is not so readily available anymore, it doesn't even matter if I recommend it or not.

An experience up for interpretation