Here is a team that made a big impression with their Power Rangers counterpart, Power Rangers Samurai. But, we are here to talk about the original japanese version from 2009. This season is considered one of the best by some critics and I have a lot of fond memories of it. So, click "read more" and let's see if it stood the test of time. 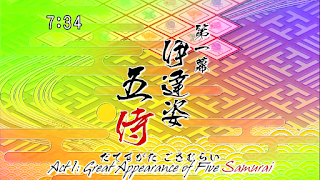 The episode begins with a kid dropping his baseball into a crevice and a narrator saying that any crevice can be a space between worlds and the entrance and exit for monsters. A warning never to look into them. Turns out, this warning is valid as some creatures called Gedoushuu appear from the crevice.

We already meet this seasons foot soldiers - the "Nanashi Company".

These Nanshi grunts give the child a scare, but are quickly taken out by an origami looking lion with the kanji for "fire" written on it.

The child is pulled to safety by this seasons mentor, Hikoma Kusakabe whom the shinkengers refer to as Jii. 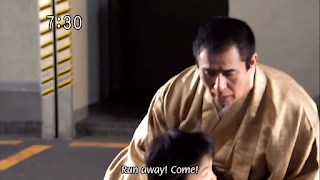 Any Power Rangers fan that knows mentor Ji, it's pretty much the exact same character.

Some people in black outfits throw smoke bombs at the Nanashi and a guy in a red jacket who becomes Shinken Red once the smoke clears. 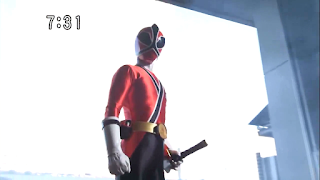 This season wastes no time showing off the Ranger suit.

Jii announces to the Nanashi that Shinken Red is the descendant of the same warrior that defeated them 300 years ago and the 18th head of the Shiba clan, Takeru Shiba. Takeru moves into action while the theme song plays. This first fight is really good showing off some impressive swordplay and takes the plays of the opening video. Once the fight is over, the episode cuts to the title card as if the opening video just concluded.

That is a strong start to an episode. Get's introductions and backstory out of the way fast and shows off good action.

Cutting back to the episode, Jii praises Takeru over his victory and encourages him that it is time to assemble the team, but Takeru objects. 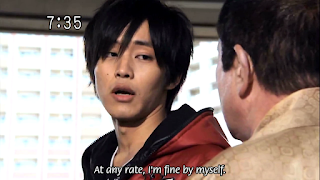 Shinken Red - Takeru Shiba. Puts on the facade of arrengents and pride and is easily the most skilled Samurai of the Shinkengers. Hates his role of "lord" and has some secrets that remain a mystery throughout most of the season.

Those eyes look like ones that have seen death. Or, just very tired.

Takeru does not like the idea of a team that will act as his "loyal retainers" because it doesn't fit the time period and he storms off.

To clarify a little, the job of a retainer is to give their life to protect their "lord", which in this case would be Takeru. He does not like the idea of others dying for him. Whether that is due to pride, overconfidence in his skill, or concern for their safety has not yet been established.

Cutting away, we meet a squid head looking creature who was watching Takeru from the other side of the crevice in what can be safely assumed is the Sanzu River where the villains are from. 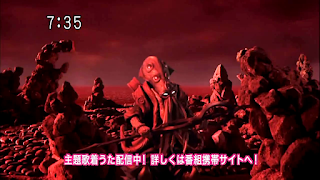 A giant ship emerges from the river and we get the lineup of all the main villains. The squid head is named Shitari and there are two others.

Usukawa Tayuu. She plays music and apparently makes sake that can calm down the main villain, Chimatsuri Doukoku. Is very cynical and acts like someone who does not want to be there.

Doukoku, a fierce swordsman who loves to get drunk on Sake. Probably one of the stronger villain leaders in Sentai history.

Fun fact, since alcohol is a no go on children's shows in American, his sake was changed to "medicine" for his headaches. However, that would make them a liquid painkiller and his drunken rages basically became him stoned on said painkiller.

Some back and forth reveals that during the last conflict, Doukoku's body was split apart by the Shiba clan and he has just now been able to restore it. Doukoku believed he had killed every Shiba before Shitari tells him about Takeru and the Shinkengers. Angers builds only to interupted by the first monster of the week. 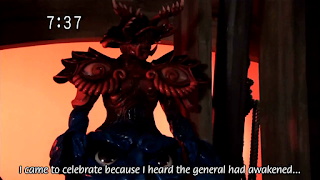 Besides Samurai, it is hard to tell exactly what the theme of these villains are. Just, red things with swords I suppose.

The monster gets sent out before the episode cuts away again. Now, we get to see the recruitment of the other 4 Shinkengers. First up is, Ryuunosuke. Looks like the ranger roll call won't have to break from the episode. 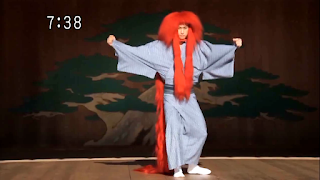 Shinken Blue - Ryunosuke Ikenami. He is the most devoted of the retainers and a stickler for rules. Often will discipline himself for failures. His dream is to be a kabuki actor which is why he is dressed like this in the photo. Rehearsal/practice. However, he puts that dream on hold in order to fulfil his duties as a Shinkenger and does so without any hesitation. 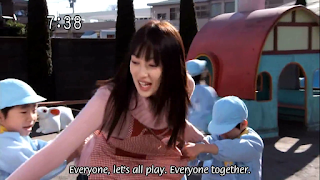 Shinken Pink - Mako Shiraishi. A very strong, calm, and tall women with a weakness for men with broken spirits with a desire to "fix" them and a terrible cook. Despite the impression she gives, her dreams are to be simple old fashioned housewife and mother. Works at a kindergarten from her love of children.

Shinken Green - Chiaki Tani. The opposite of Ryuunoskue, a regel/slacker who abandoned a lot of his samurai training to hang out at the arcade playing mainly Tekken. He is the weakest Shinkenger who initially does not want to be a retainer. Cheerful and honest with a short temper and has the "get your act together" story arc. 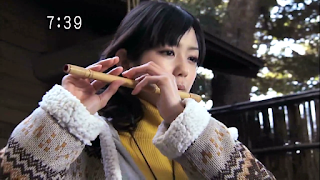 Shinken Yellow - Kotoha Hanaori. Replaces her older sister as Shinken Yellow after she became too ill to fight. Small, pure, and incredibly selfless. Kotoha always puts her fellow rangers firsts and often does not care what happens to herself. Very skilled but gives herself a hard time and looks up to Takeru and is jealous of Mako.

The monster appears from a crevice in the floor and starts attacking people in order to collect screams. 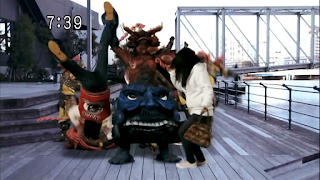 Cutting to the Shiba residence, Jii informs Takeru of all that was happened with the villains and says it is time to meet the others. Takeru is still against forming the team but Jii reminds him of what his late father's last words were and that everyone shares the same destiny. Basically, Jii doesn't take no for an answer. 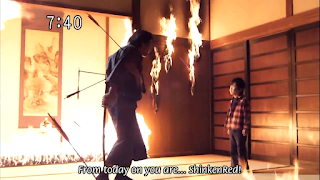 Jii shots arrows with a paper on them that has the kanji for "gather" written on them to the 4 other Shinkengers and they all drop what they are doing and rush to the gathering point. With special samurai taxi service for Mako. 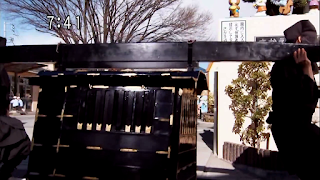 Takeru is given the other 4 changers and uses his owner to write the kanji for "horse" in the air which summons a horse and races off to the meeting point.

One of the perks of being a Shinkenger is the Scribblenaut power apparently.

While all that is going on, we see the Nanashi going on a rampage. They are slicing & stabbing civilians and throwing some of them off a bridge. Sounds violent but not a drop of blood is spilt nor are any wounds visible.

The 4 other Shinkengers all meetup while mistaking each other for Shinken Red before Takeru finally arrives. Takeru gives them all one final chance to back out saying that once they join there is no turning back. Everyone either fights and wins or dies trying. 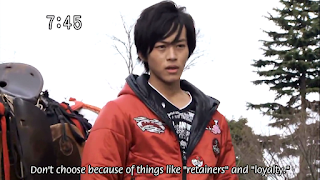 Everyone hesitates for a moment, but agrees to fight in their own unique way. Now, it is time for the first confrontation.

Naturally, this leads us to the first group henshin and henshin sequence. 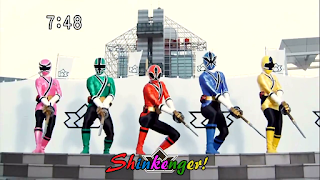 I feel like that would have been very easy for the monster to interrupt.

All the Shinkengers do their roll call and the battle begins. The beginning of the fight is all sword slashing/stabbing and some arrow deflecting. When it becomes apparent how many Nanashi there are, everyone huddles around Takeru to try and protect him, something he does not approve of.

Now is the time for the episode to show off each Rangers special weapon which they acquire by spinning the discs on their swords. Takeru sets a good example for everyone by smashing away large groups of Nanashi at once. 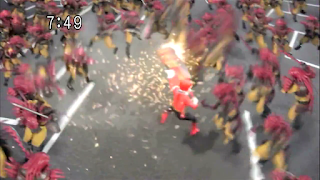 Everyone is amazed by Takeru's skill and is inspired enough to summon their own special weapons and jump into the fight.

I feel like the girls got the short end there.

Everyone fights confidently, except Chiaki who fumbles and drops his sword a couple times, but ultimately the Nanashi are defeated. All that is left is the monster who finds himself one on one against Takeru. The monster is struggling and throws a car at Takeru, but he just slices it in half.

A lot of cars were blown up in this battle. I feel bad for the owners.

Eventually, the monster is shoved against a support beam and sliced in half by Takeru's CG sword swing. 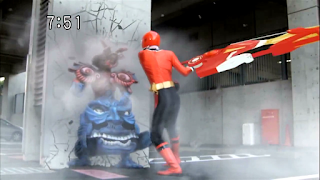 I caught the CG. They tried to hide it but, dang.

Monster goes boom and everyone is impressed. But, Takeru warns them that these monsters, Ayakashi, have two lives and the second one is giant. 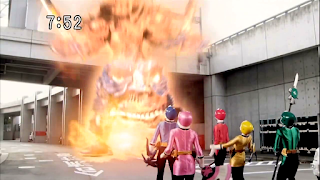 Just like that, two lives. No funny spell or machine that turns them giant, it is just their natural second life. I like it. Saves time.

Ryunosuke reminds everyone that they have their origami for these situations. 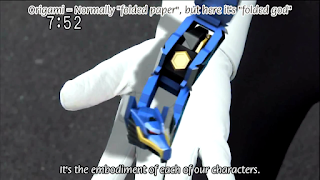 Now for another sequence; summoning their mecha.

No combination this episode, it is an individual mecha fight. Everyone takes a hit and gives a hit with Takeru giving the finishing blow. Thus, they earn their first "chapter closed".

The episode ends with the Shinkengers giving their "we did it" moments when Jii returns to congratulate Takeru who just walks off. And, everyone follows after as the credits begin to roll.

This episode was great and can be summed up as a no nonsense episode.The action was great, characters were interesting, the pacing never dragged, and everything was introduced quickly and effectively. A reader of my other analysis' may notice I didn't add nitpick comments in this one nearly as much, that is because I was just enjoying the episode and did not think of many. Honestly, this first episode was enough to remind me why this is one of the stronger Super Sentai seasons.

The only issues I had were with the horse summoning as I feel like that is a pretty strong power that will only be used for plot convenience. Also, a strange choice with sound effects.That is a really weird thing for me to bring up, but there is an odd crackle sound that is used for a lot of the hits and explosions that does not sound good at all. Luckly, it is not used very often. (Not in this season at least.) But, if those little things are my only complaints then I'd call this opening a big success.

Overall, I highly recommend this one. Will the rest of the season hold up? Too soon to say, but for now, bravo. 5/5
Posted by Cendoo at 4:43 AM