Super Sentai Saikyo Battle - Battle 1: Who is the Strongest in History!? - Summary/Review 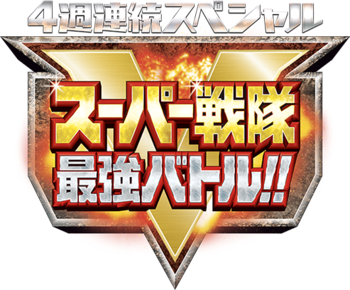 Super Sentai Saikyou (Strongest) Battle is a 4 episode mini series that aired in between Lupin vs Pat and Ryusoulger. (But is a continuity mess.) An interesting concept, a big tournament with 32 Sentai Ranger teams each consisting of 5 members from various teams, 160 total returning rangers. Sounds like pure fan-service. I'm gonna cover all 4 episodes so click "read more" if you're interested.

Basically, the Rangers for each team are not limited to their respective seasons which leads to some interesting team ups. With 32 teams, let's break them down. All 32 Teams are given their own unique names, here is a list of them all. 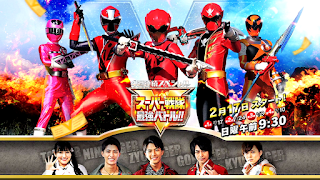 The episode begins with a purple armored warrior fighting against the 35th Super Sentai, the Gokaigers minus Luka. This armored warrior takes all 5 of them down and talks about finding someone stronger when Captain Marvelous rises up. 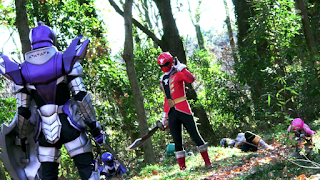 However, this rise to battle is short lived. A few words are exchanged, Marvelous questions who this fighter is and the purple warrior uses one of Luka's (GokaiYellow) technics then defeats Marvelous with a cross blade beam attack. 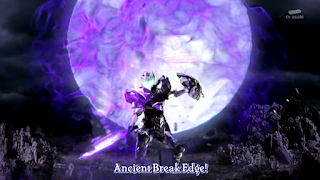 Sadly, not being the team not being main characters this time, the rangers don't get a miraculous turnaround win.

After this, the purple warrior introduces himself as Gaisorg and walks off saying he seeks the strongest in the universe. Once he leaves, an invitation appears before Marvelous. Cut to intro! 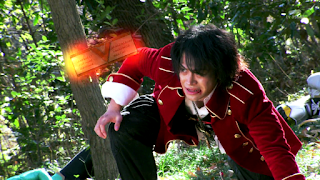 I appreciate the returning actors. It is also worth noting that the theme song revealed a lot. Mainly what the battle is and, considering it focused mainly on Marvelous' team, that his team will be the main focus. Can't say I appreciate the favoritism.

One theme song later, we now find ourselves at the Patrangers HQ with Keiichiro. (Patran 1Gou from Lupinranger vs Patranger.)

Keiichiro also receives an invitation without needing to almost die in a battle. Now, we get to see how they work. 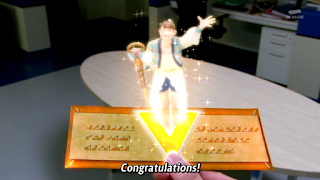 Things got silly so fast!

This lady with a magic wand (who was in the opening theme) tells Keiichiro that he has been invited to Super Sentai Saikyou (Strongest) Battle and if he wins he can have any wish granted. Keiichiro agrees and is teleported. (It is implied that Keiichiro's wish would be for world peace.) 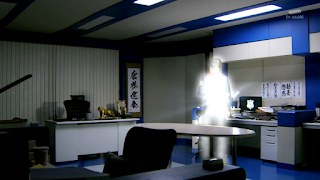 Strange choice honestly. As much as I love Keiichiro, he was definitely not one of the stronger rangers in history. Probably the opposite. Also worth noting that non of the Lupinrangers got invited despite them constantly outclassing the Patrangers. Well, let's hope he does well anyway.

Now, we have a mass teleporting scene. 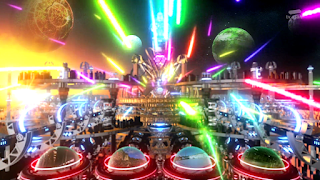 A few shots tease who the participants are, when the girl with the magic wand appears. She introduces herself as Rita and the location as Planet Nemesis. Red flag! 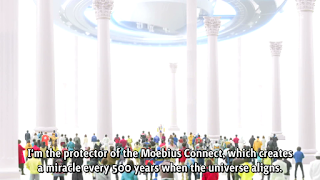 Now the teams are formed. We are first introduced to Oddball Team, the main protagonists. 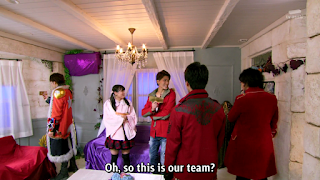 Three Reds, a Pink, and an Orange. Led by Yamato Kazakire.

The Oddballs all introduce themselves and their wishes, which are mostly personal goals. Stinger is distant but still participates, but Captain Marvelous is in a sour mood and does not want to talk to anyone. Possibly still upset about his team. Now, the first matches are announced. Naturally, it is between the only two teams that had any introduction this episode. 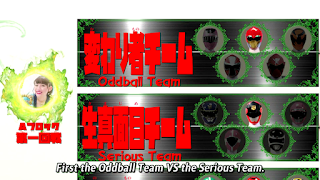 They all have the same wish, for world peace.

It would make this article too lengthy to do that for all 32 teams so, please click HERE for information on all other teams.

Now, the battles to grab the gems have begun. In every area, the gems are just floating in mid air with every ranger trying to grab it while preventing the others. Basically, imagine a ladder match in wrestling but with Super Sentai. 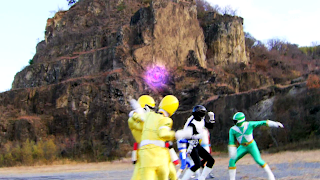 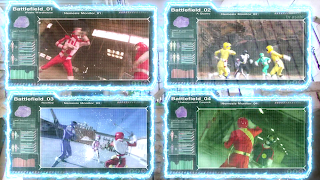 Every fight is pretty evenly matched and contain plenty of fan service for fans of previous seasons. Keiichiro and Yamato's battle take center attention not long in and the two of them are exchanging blows and words. However, their fight takes a pause once Keiichiro reveals his wish would be for world peace. 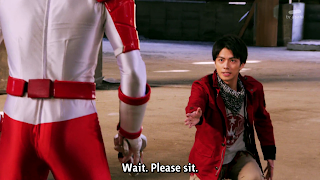 Yamato explains that everyone wants world peace but aren't saying it. Also, that world peace is not something one person can give but is a goal that everyone has to work together to achieve. Keiichiro understands and the two even share a couple laughs. This was a real sempai moment.

Keiichiro asks what Yamato's wish is and the episode cuts to a commercial before he says it. Then, when it cuts back, Keiichiro says that Yamato deserves to win because of his wish and surrenders. Tease! 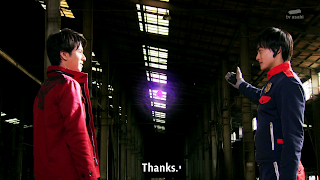 I expected Keiichiro to lose, poor Patrangers can never catch a break. But, it is refreshing to see him go out on his own terms.

Back in the Oddballs room, Yamato says he will keep his wish a secret because it is embarrassing. Also, it is revealed that Marvelous has revenge on the mind against Gaisorg believing he will show up.

As battles wrap up, Gaisorg does re-appear and attacks Super Strong Team. After winning easily, Gaisorg gets bored and leaves to find someone stronger. 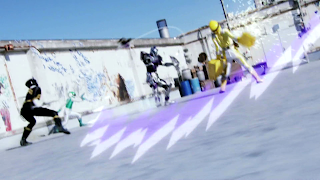 Back in the Oddballs room, Marvelous reveals that Gaisorg has been attacking Super Sentai teams to the others. Upon hearing this, Rita randomly appears in the room looking very interested. 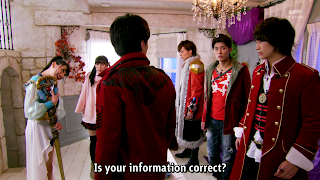 Rita says she will take care of Gaisorg and disappears. Now, it is time for Round 2 of Block A

This match actually starts out with a few seconds of unmorphed fighting which is always cool to see. Also, two things are learned in the struggle, there is a barrier around every arena, and Go-on Red cannot summon his mecha and Bouken Silver cannot contact his HQ meaning that Planet Nemesis has a powerful jamming signal. That's another red flag! Stinger gets suspicious about magic in use. Don't be too surprised if it is magic. Seven teams have someone from Magiranger. 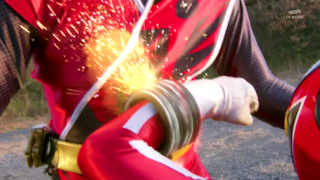 Vehicle Team is about to win when they have a goofball moment. The two bump into each other, unmorpher and Eiji acts stiff and tired. So, he pulls out some celery to refresh and shoves a tomato in Sosuke's mouth. The two are enjoying the snack break but aren't paying attention and Takaharu grabs the crystal resulting in another win for Oddball Team. Eiji and Sosuke give some words of encouragement before being teleported out. 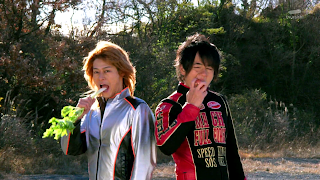 Of course, Gaisorg appears on the battlefield now which prompts Marvelous to dash out towards the battlefield. The episode cuts away there; but before ending, it gives us the first look at the next up and coming Super Sentai team at the time, Ryusoulger. 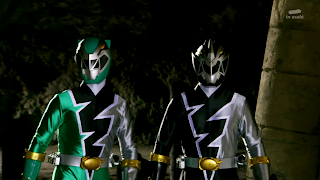 Ryusoul Green and Black. The two appeared to have ignored their invitations and are exploring a cave. They show off on of the ryusoul powers and the episode ends before we learn what they are doing. Double cliffhanger.

This first part was really good and a great source of fan service. I was a little upset at first that they were focusing mainly on one team, but I see that this is meant to be a proper story driven special and not just random fan service. The action was non stop, everyone who reprised their role did a great job, and there was a lot of attention to detail like how it is shown that rangers who already cross-overed with each other already knew each other. Frankly, this is something that just needs to be watched and not researched. If you are a fan of Super Sentai at all, then you owe it to yourself to check out this special. Let's hope the next 3 parts are just as good. 5/5
Posted by Cendoo at 12:00 AM