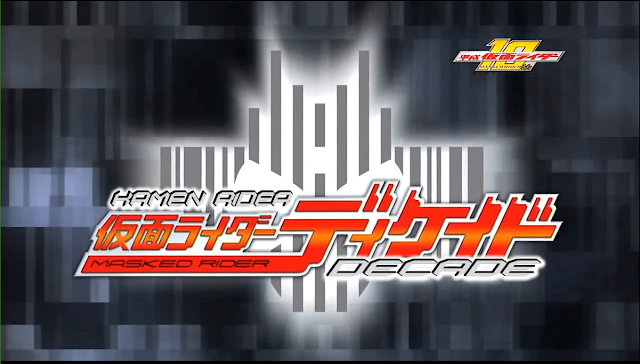 Ahh.  The good old anniversary seasons of Kamen Rider.  Full of crazy action and crazy crossovers.  This is what we expect from these special Kamen Rider seasons.  Yes, we do get all that in this episode.  Will it be any good though?  Find out as I, Kaiser Sensei takes a trip back to 2009 with episode one of Kamen Rider Decade.  (Click on "Read More" to read the full article.) 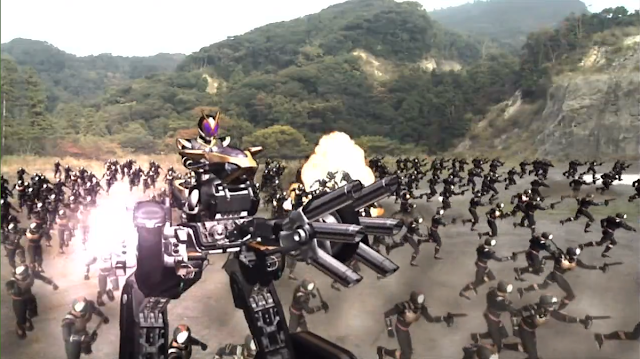 We open up this episode with a cold and empty looking valley, where a woman is wondering with a look of confusion.  Suddenly she is structed by a missile, where she sees something absolutely incredible.  Kamen Riders.  Lots and lots of Kamen Riders and they all are getting killed off.  It's a Kamen Rider war, but who are they fighting?  Once the Kamen Riders are dead, the woman turns to see a glowing God-like Kamen Rider named Kamen Rider Decade.

It ends up being all a dream.  The woman, who is named Natsumi, is in tears and is glad that the dream is over.  She works in a photo shop with her grandfather (who also plays the uncle in Kamen Rider Zi-O).  Today there is an angry crowd, all complaining that their photos look terrible.  They were all taken by Tsukasa, the main character that we'll see a little later on.  Natsumi throws the photos into a bin labeled, "Tsukasa's Bad Photos" and storms off to find him.

On the way to find Tsukasa, Natsumi notices some weird distortion on anything with a reflective surface.  Someone is watching Natsumi.  Meanwhile, Tsukasa is messing around with his camera while waiting for some customers.  Unfortunately, he is confronted by some unhappy customers that also happen to be members of the Yakuza.  The Yakuza attack, but Tsukasa easily doges their attacks while also explaining as to why his photos are bad.  You see, Tsukasa wants to take a photo of every thing he sees, so he gets distracted...  Or does he?  Turns out that his camera captures distortions found in the world.  (Edgy.) 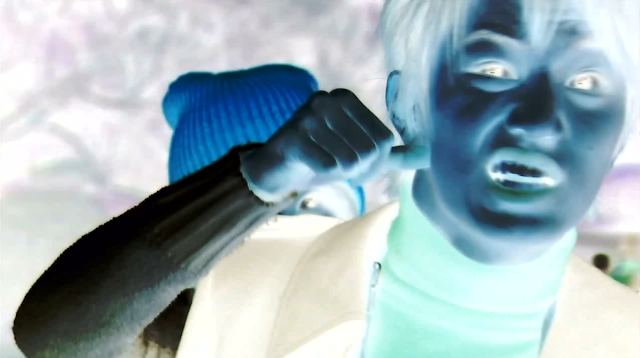 While looking through his lens, a mysterious figure talks to him and tells him that his destiny as Decade has begun.  Natsumi comes in, whips out her thumb and applies the tickle poke of doom.  Tsukasa starts laughing uncontrollably, freaking out the Yakuza in process.  Natsumi drags Tsukasa away to give him a piece of her mind.

Tsukasa is sent back to his (supposed) home dimension, where it is being invaded by monsters.  Things get more weird as Natsumi is constantly running through alternate dimensions while trying to escape the monsters.  Natsumi finds some Kamen Rider gear in some rubble and also finds Tsukasa, whom is outside a dimensional wall trying to break through it... WITH HIS FISTS! 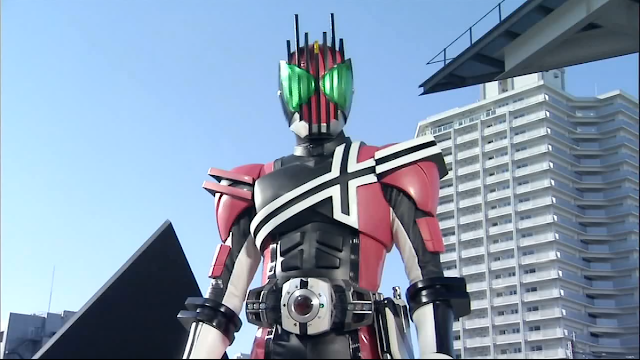 Decade is confused about how Natsumi knew about the Kamen Rider stuff and then they hop on a bike and ride off into another dimension.  Things become super dark when Decade returns to his home city.  Dead bodies are everywhere!  Not knocked out.  Not stunned.  Not even sent to the Shadow Realm.  They are dead. D-E-A-D, DDDDDDEEEEEEAAAAAADDDDDD!  We zoom into the dead bodies of the Yakuza from earlier on in the episode.  The bodies crumble and tentacles come out to pull Natsumi off of the bike and only that. (Don't get any crazy ideas, SICKOS!)

Our heroes warp (yet again) to another dimension, where Tsukasa finds that all of his cards are now blank.  The voice of the mysterious figure comes in and explains what on Earth is going on.  Even so, this isn't clearing up any of Tsukasa's confusion.  The world that our heroes are now in is being attacked by giant sea creatures, who aren't only attacking the city, but also themselves.  Out of nowhere a huge Akira-like explosion goes off.  Right as the blast is about to reach our heroes, time freezes. 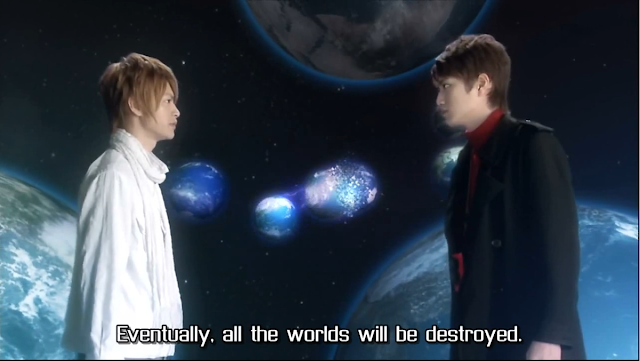 The mysterious figure walks out of the blast and warps Tsukasa (again) to a weird dimension where he sees many different Earths colliding.  (I guess this is what it's like when worlds collide.)  This is the point where we finally get some clear answers as to WTF is going TF on.  There are nine other dimensions, each with their own Kamen Rider.  The only way Tsukasa can save his home dimension is by destroying the other dimension.  So, you can say that this the Kamen Rider equivalent on DC's Crisis on Infinite Earths.

Our heroes return home, a home that's still frozen in time to see that Grandpa is surfing channels trying to find something good on the TV.  Our heroes accept the mission and are now trying to figure out how to warp between dimensions.  Grandpa pulls down a huge painting and now Tsukasa is in another dimension where he is dressed up as a police officer.  Tsukasa is really, really confused.

Here is where I was expecting the episode to end, as it is a great spot to leave it on.  Nope!  We get another big scene.  A scene where the police are in a shootout with a monster.  The monster is too strong for them, so one of the police calls for Kamen Rider Kuuga.  Kuuga enters the fight, clearing up Tsukasa's confusion as to where he is, what he must do, and who his target is.  Cue the credits.  This episode is over. 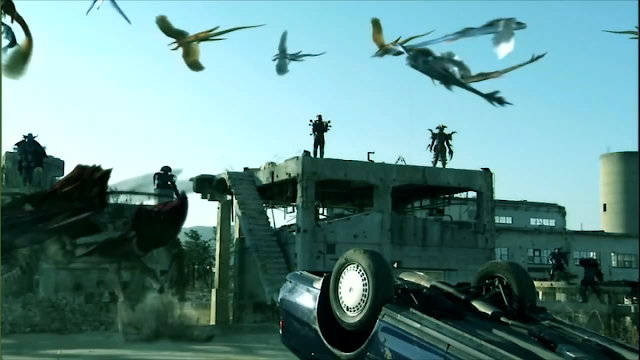 The story in this episode is interesting, that's in both the genuine and sarcastic terms.  A lot of stuff happens, but the pacing of it all is super tight.  It doesn't fly by so fast that you forget little details, nor does it become too slow to where they have to cut out details.  What you get here is an episode that perfectly sets up the entire series.

Yes, the characters do indeed fall under this tightness as well.  You get a very good sense of the characters as soon as they speak their first sentence.  They are also quite likeable and have a lot of personality, perfect for a show of this kind.  I loved how natural they sounded interacting with each other.  This helps to make them very relatable, despite this being a completely unrealistic show.

The action in this episode isn't the best that you'll see in a Kamen Rider series, as a lot of the action ends as soon as it starts.  However, it isn't about how the fights look, but more of how it ties in to what is going on.  Oh, silly me, I've forgotten about something.  There is one really good action/fight scene in this episode and when I say, "really good", I really mean that it's a spectacle.  The opening scene with the Kamen Rider War (or as I like to call it: Dynasty Warriors Kamen Rider) is one of the most incredible scenes that I have ever witnessed.  Best way I can describe it is that it's a Kamen Rider genocide.  If that sounds insane then you've gotta watch it. 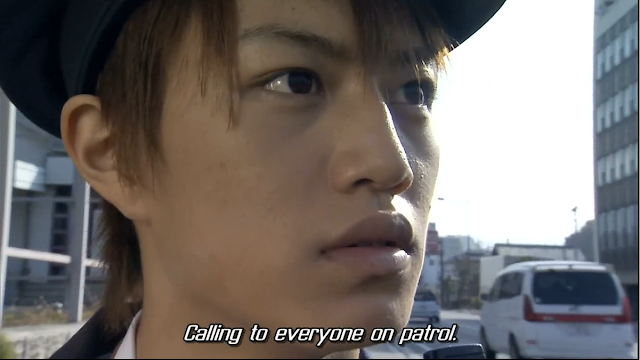 This show is super, super, ultra heavy on the special effect.  Much more so than any of the typical Kamen Rider series.  As awful as a lot of it looked, it was used well and helped add on to the picture that the story was painting.  It also works because this is an episode about everything falling apart.  Some surprisingly grim imagery and uses of the effects.  This is much more darker than most of the Kamen Rider series that I have watched. I mean, what other Kamen Rider series opens up with a woman getting hit by a missile?  Just like the other effects, it had a purpose and helped a lot with the world building.

The costumes in this are fairly average for the most part.  Sure, you get to see a lot of actors in costumes playing monsters, but those costumes were incredibly generic, even if they were just footsoldier-esk monsters.  The Kamen Rider costumes are quite fantastic.  Decade's costume looked bad to the bone (AKA bad-ass) and the other costumes that appeared are also great looking. 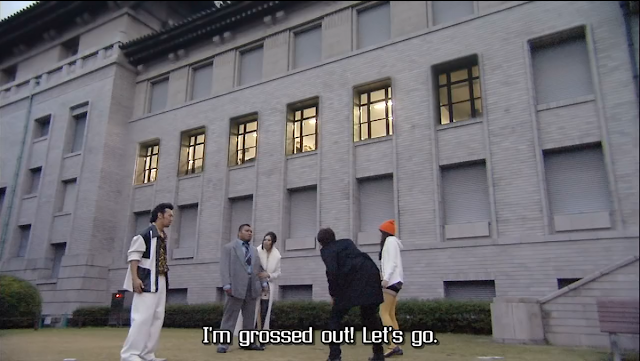 Overall, a very chaotic, very crazy, very interesting, and most importantly it's a very well done episode.  It's also one of the most different Kamen Rider openings that I have ever seen and could of easily landed flat due to all the things crammed in.  Thankfully, it hits its target near perfectly.  This episode is well worth a watch and I give it a really strong eight out of ten. 8/10 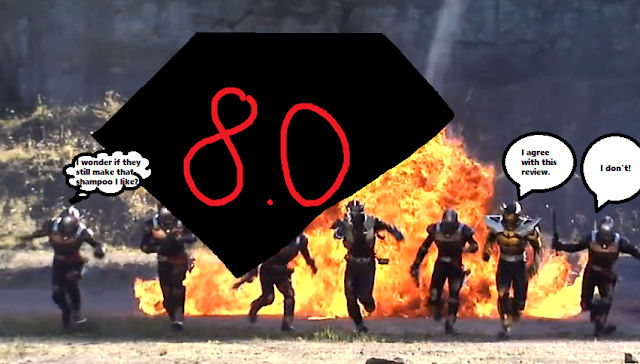