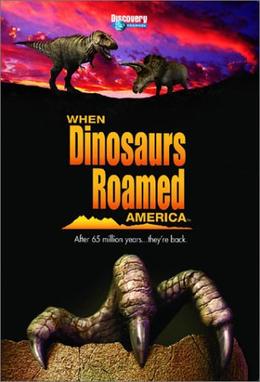 I've been wanting to cover more documentaries in my articles and the month-long break gave me the perfect opportunity to think long and hard about what documentary I would absolutely love to discuss. As I mentioned in my Walking With Dinosaurs review, dinosaur documentaries just absolutely consumed my childhood and teenage years. I always tried to catch some new show on Discovery or Science channel when they were on, maybe National Geographic or Animal Planet, and for the most part, they were fun but kind of samey. Few ever reached the same standard of quality that Walking With Dinosaurs achieved.

But there was one documentary that I remember growing up that hit all the right emotional and educational beats while maintaining a level of CG quality that I actually think surpassed Walking With Dinosaurs. So it is with immense joy that I take a serious look at a seriously underrated dinosaur documentary.

Released on Discovery Channel on July 15, 2001, When Dinosaurs Roamed America brings us back to the Mesozoic Era, focusing exclusively on dinosaurs that lived in the area that would eventually become the United States.

When Dinosaurs Roamed America is a 91 minute documentary special that premiered on the Discover Channel in 2001. Narrated by John Goodman, the documentary is divided into 5 sub-segments, focusing on the Late Triassic (220 mya), Early Jurassic (200 mya), Late Jurassic (150 mya), Mid Cretaceous (90 mya), and finally the era that every dinosaur documentary covers, the Late Cretaceous (65 mya).

The documentary focuses exclusively on the biodiversity of the United States, showing us places as diverse as prehistoric New York city and the massive rain-forests of prehistoric New Mexico. Each segment is largely self-contained, focusing on a single dinosaur as it explores the world in which it inhabits and the creatures it might come across in its environment. Occasionally the documentary will also cut to a modern scientist discussing an element of paleontology that inspired an event in the reenactment segments, as well as showing us the internal bone and muscle structure of these creatures, revealing how they move and work both internally and externally.

I've made it no secret that I have a deep-seated love of dinosaurs and dinosaur documentaries especially. So it will likely come to no surprise to know that I love When Dinosaurs Roamed America. I really like this documentary, despite its somewhat smaller scale and budget when compared to the juggernaut that is the Walking With Dinosaurs series. In fact, I feel the comparisons, while unavoidable, actually speak highly to the overall quality of what Discovery Channel was able to accomplish.

The stellar looking computer-generated dinosaurs, moving narration by John Goodman, and the emotionally compelling presentation of the documentary somehow manages to make one feel patriotic about America's paleontological history.

Which is a strange thought process now that I consider it?

One of the things which immediately draws the eye when watching Walking With Dinosaurs is the integration and mixing of practical effects and computer-generated imagery. This constant switching between the two styles with regards to the appearance of the dinosaurs helps to trick the audience and better sell the effects as a whole, to really make you feel like the dinosaurs are really there.

With regards to When Dinosaurs Roamed America however, the smaller budget meant that almost all the dinosaurs were portrayed using computer-generated imagery. As such, one might be permitted to think that the effects and appearance of the dinosaurs would be a tremendous downgrade from Walking With Dinosaurs and, in some ways, it is. But a key difference between the two documentaries is the roughly 2 years of difference in their releases. 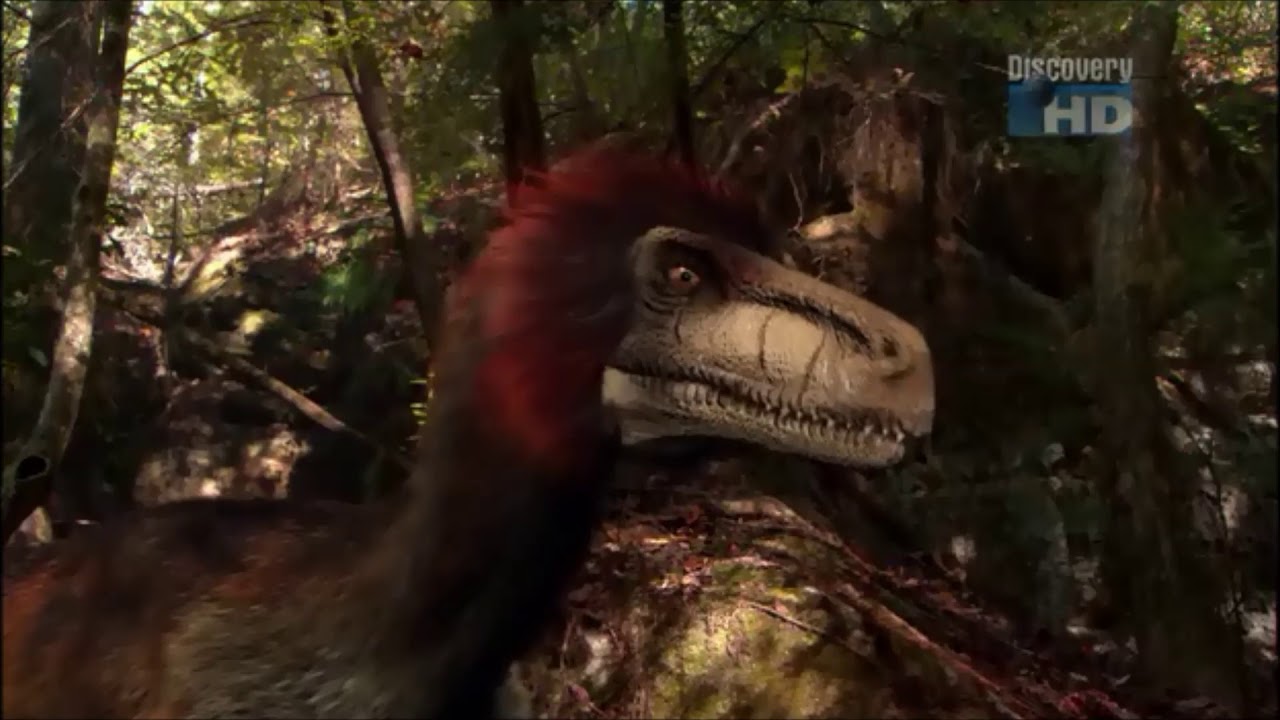 That may not sound like much at first glance, but in the timescale of computer technologies, it is a vast swath of advancement, especially with regards to textures. Quite a few of the dinosaurs introduced in When Dinosaurs Roamed America look even better than their Walking With... counterparts. This is also advanced by some of the first feathered dinosaurs that I can remember being portrayed on screen as well. Now this is by no means consistent, as the T-Rex shown in the final sequence, much like the T-Rex in Walking With... looks tremendously awkward and fake when compared to other dinosaurs.

Not better than Walking With Dinosaurs but not any worse either. Rather When Dinosaurs Roamed America has a visual aesthetic that fits with the tone and aims of the documentary to give us as accurate a picture as possible of these dinosaurs on a smaller and more efficient budget.

The soundtrack and sound design of When Dinosaurs Roamed America is absolutely stunning, easily ranking among the most iconic sounding documentaries I have ever had the pleasure of watching.

I love to listen to the soundtrack all on its own, as it is a marvelous mix of mysterious and adventurous sounding tones that keep a heart-pounding sense of wonder to everything you are watching. I would have to say the the intro song is clearly the best on the soundtrack, being the most memorable part of the film. But the whole soundtrack really tries to give a sense of awe and excitement, relishing in the majesty and scale of these long dead animals.

The use of music keeps you immersed in the action on screen without overpowering either the dinosaurs or the narration. It is a fine balance that not every documentary is able to achieve effectively, which makes When Dinosaurs Roamed America all the better in the sound department.

The narration is fascinating in its own right as the documentary is largely relaxed and neutral in its presentation of the dinosaurs, relying on minimal but effective narration by John Goodman. Goodman's voice is quite identifiable but unlike a of celebrity narrators, Goodman keeps a solemn dignity to the narration while maintaining a common down-to-earth vibe that was his go-to presentation in shows like Rosanne.

The final element of sound that I have to talk about is the sound of the dinosaurs. It has only been through recent paleontological discoveries that we have been able to properly conjecture on what dinosaurs have actually sounded like. Thus filmmakers have largely been given the freedom to make their own choices in terms of how dinosaurs will sound. Obviously, Jurassic Park has had the greatest impact on how dinosaurs sound, with many dinosaur documentaries taking direct inspiration or outright stealing from the science fiction adventure film.

When Dinosaurs Roamed America immediately caught my attention by being much more experimental with its sound design. While some dinosaurs like the Dromeaosaur sound like your standard raptor, and the T-Rex sounds like every other T-Rex, many other dinosaurs sound unlike anything you've ever heard. The Nothronychus has a distinctly pig like sound to it that fits really well with its strange, almost unidentifiable, appearance. But if I had to say which dinosaur sound I remember the most, it would ironically be the dinosaur that I liked the least in Jurassic Park.

In the past, I've made no secret of my perpetual fear and dislike of the Dilophosaurus from Jurassic Park. That little hissing asshole scared the shit out of me as a child. But the creature in Jurassic Park bears little resemblance to the actual Dilophosaurus. When Dinosaurs Roamed America presents a much more accurate creature. But the sound they give it is almost hauntingly unearthly. They really make this thing into the apex predator that it seemed to be in its own time. With a vicious almost metallic like roar, I can hear it even as I am writing up this review. It just sticks with you.

It is the iconicness of the sound effects and their balanced integration with the narration and score that allows me to give the audio elements of When Dinosaurs Roamed America some of the highest marks.

The film is split into 5 sub-sections, each covering a basic story about the life of a specific few dinosaurs, usually focusing on one individual or pack in particular to be the "main" dinosaur. Every so often, the documentary will cut "forward" in time to an interview with a talking head, usually some paleontological expert who will then talk about an element of what the audience has just seen in the previous segment and how paleontologists know that what was presented is accurate. To an individual as obsessed with dinosaurs as I am, these talking head segments, while somewhat immersion breaking, are infinitely fascinating to me.

Beyond the talking heads and normal dinosaur segments, When Dinosaurs Roamed America also employs a really cool and almost interactive X-Ray element, where they will show off elements of the dinosaurs direct biology. Whether these are specific bones or muscle groups, or even the shape of the head or gastrolith stones in the stomach used for grinding up food, this segment really helps to sell that what we as the audience are seeing really makes sense.

What When Dinosaurs Roamed America loses from its occasional moments of immersion-breaking, it more than makes up for with its educational presentation, a soothing and dignified narrational presentation of the dinosaurs acting out minor self-contained narratives, and psuedo-interactive elements that I've never really seen done in any other dinosaur documentary. All of this really helps give When Dinosaurs Roamed America a distinct identity and reputation among the enormous herd of dinosaur television documentaries that graced television in the early 2000s.

Regardless of whether or not this film is better or worse from a critical standpoint, on a personal level I have always held a soft spot for When Dinosaurs Roamed America. The film is surprisingly emotional and a relatively simple concept in execution. It has some of my favorite dinosaur sequences and was one of the most accurate dinosaur portrayals for its time.

When I think about this film, with its stellar narration by John Goodman and professional talking heads, excellent computer-generated imagery, and stunning score, I think of no better example of the collection of those qualities than the final fantastic moments of the documentary, where it brings the perspective back onto us. As the paleontological history of the dinosaurs is, in a way, the history of mammals and the rise of humanity as well. The story of life is at much our story as it was theirs. When Dinosaurs Roamed America really understood this and so delivered a dignified window into the life of an era that is so far removed from us and yet fundamentally vital to our own story of humanity.


Be sure to tune in next week when I move from one of my favorite dinosaur documentaries to an animated film widely considered one of the greatest Disney ever produced.