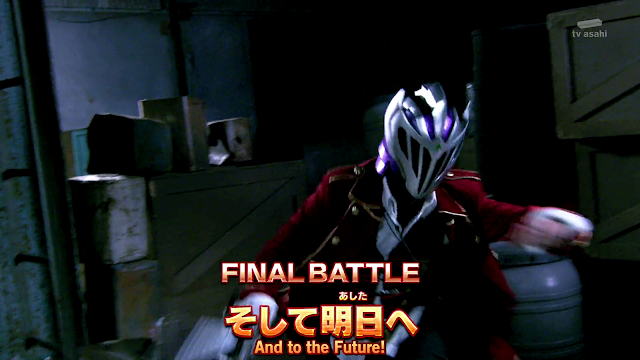 This is it! The final part of this short but impressive special. While there has been a lot one can nit-pick about continuity and clear favoritism for the boy rangers, overall this has been a great experience and a lot of fun. Let's see how they will wrap everything up. Click "read more" for my full coverage.

The episode begins immediately where the last one left off with Captain Marvelous putting on Gaisorg's helmet to see it's memories in order to find out where Luka (GokaiYellow) is while risking being possessed. Marvelous fights the possession in agony while seeing memory fragments that show him where the captured rangers are. He then races off with Kagura following while Stinger and Yamato rush off to deal with Ultimate Dai Satan.

The intro is skipped on this episode.

So far the plan works. Marvelous finds Luka and Takaharu chained up and frees them. However, the possession gets worse and Marvelous begins attacking the two of them. Fortunately, Luka manages to blast the helmet off Marvelous and then kicks him awake. Luka is too tough to ever play a damsel in distress.

A bit of backstory is given to Gaisorg before being brushed off as wrapped up. This armor has wondered for tens of thousands of years searching for strong people because it basically feeds on their aggression. I doubt this is the last we see of the armor. At this moment, the planet shakes beause the wish granting gem is finished. 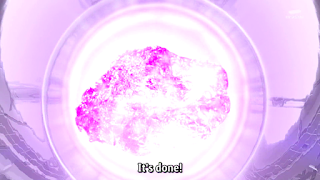 So the wish part wasn't a lie, just the part where Rita said the winning team would get the wish.

Rita begins wishing for the revival of Ultimate Dai Satan when Stinger and Yamato arrive to stop her. Unfortunately, they are too late and the wish is made. After being questioned, Rita reveals the fate of the real guardian she replaced; amazingly, Rita sent the real guardian flying to the end of the galaxy.

Why didn't she just kill them?

The gems were too powerful for Rita to collect alone, so this is why Super Sentai were tricked. Ultimately, her plan is simply that she wants the universe to disappear even if she does not survive. 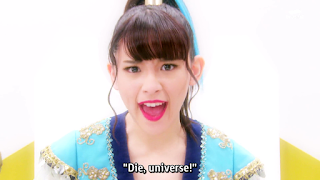 This is all an act of a short of revenge on justice. Rita comes from a planet that never knew justice where everyone served evil. She heard stories of heroes but no one ever came to her poor planet with no resources. Also, guys pretending to be heroes would victimize children. (Whatever that means.) Now, with no faith in anything Rita wants everyone and everything to die.

Wow! I don't even know how to react to that. Not quite as simple as villains who say "it's fun to be bad". Bravo, actually got me almost sympathetic towards someone whose goal is mass genocide.

Stinger makes an attempt to reason with and reach out to Rita. He says that Rita should have faith in herself because if she hated/refused to serve evil and sought out justice then she is not evil herself. Even tells his own tragic story about his older brother who hated evil but fell to darkness in a pursuit of power. 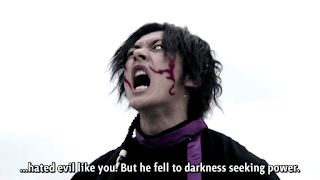 Did this make you want to watch Kyuranger? Because it did for me.

Sadly, Stingers words are ignored and Rita blasts the two of them away and proceeds with her plans.

Rita throws her wand into the ground to begin the revival process. 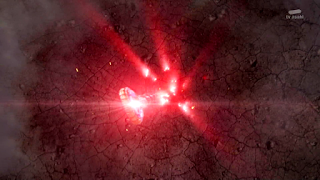 That is how Bondora used to make monsters grow. Bondora was also formally sealed on Planet nemesis and her Power Rangers counterpart is named Rita. Not too mention that Bondora originally summoned regular Dai Satan. There is no way this isn't a reference. I approve.

The giant CG devil is born and immediately starts blowing stuff up. Yamato and Stinger try to counter attack but are instantly blown away. Rita then summons some more various foot soldiers to take them out. A little redundant at this point. These grunts actually give trouble until the other 3 Oddballs arrive to help. A blast from off screen hits one of the grunts and everyone walks in in slow motion. 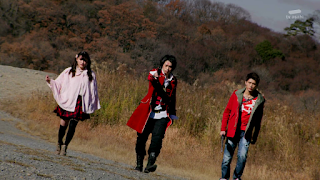 For reference, Gokaiger had a habit of doing this blast from off screen and join in a fight bit repeatedly throughout its' season. Almost every episode for the ladder half. It got repetitive in the season, but this was a nice nod. Where is Luka though?

With the Oddball Team back together, the foot soldiers are easily defeated in an unmorphed fight. Now, for the first time, the whole team henshins and fights together. 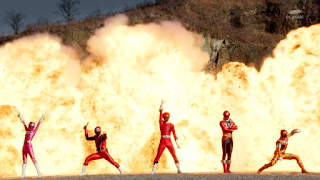 And of course, time for their super forms. Which might have been helpful at a few earlier points but that makes them less special. 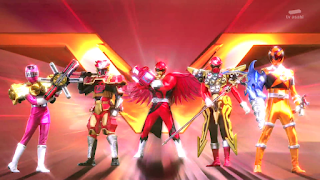 If you're wondering why Gokai Red's armor has pictures of sixth rangers on it, it's because that super form was actually not his but Gokai Silver's. But, he did use it once when the two of them got stuck in the same body.

All five of them fly towards Dai Satan (even though not all their forms can fly) and then they all appear back on ground just for some camera shots.

Seriously, they have a moment with each one of them just running or jumping through an explosion. It is just to show off the costumes and makes you roll your eyes once you realize that.

Eventually, Yamato starts blasting at Ultimate Dai Satan which does not appear to be doing any damage. At that point, Marvelous gives a call to Luka to check in. Apparently, she stayed behind to try and destroy the magic seal. However, even more leftover grunts appear to ambush her. 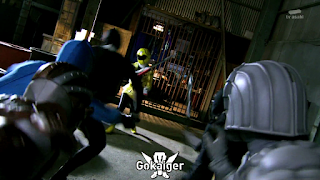 So, we do get a Gokai Yellow fight.

Luka pushes through the grunts and takes a few shots at the seal. But, the seal's thorn vines come to life and fight back. This struggle continues while the Oddballs are stalling Dai Satan and the two fights cut back and forth.

Cutting back, the Oddballs continue firing their former big finishing moves at Ultimate Dai Satan but just cannot match his power. They all get knocked out of their super forms. Everyone has a flashback to a meaningful thing a ranger from another team said to them and rises to their feet. The Akarenger Ranger Key glows and floats before Marvelous. His flashback moment didn't happen during the tournament but at some unspecified before time. 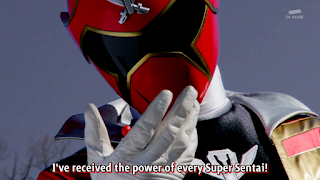 They still support those ranger keys because they were that successful. But, they still won't break tradition and give the Gokaiger's another season.

After a few more scenes of struggling, Luka manages to break the magic seal and destroy the barrier around the planet. Now, Marvelous is able to call his ship and you would think a giant battle would take place with all their Megazords/Super Robos, but instead they do a tribute to the first Super Sentai, Gorenger. One of Gorengers special attacks was passing a ball around that lead into a finishing blow; now that move is updated with lots of red. All with the Gorenger's theme song playing. 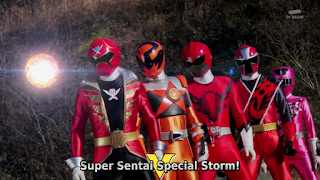 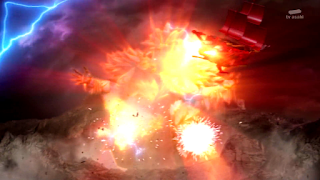 And, that works, Ultimate Dai Satan is defeated. Lame! Rita is outraged at this turn of events and summons the Gaisorg armor for herself. She is able to completely control the armor and is the rangers true final battle.

Gaisorg Rita fires the Ancient Break Edge that nearly finishes off the Oddball Team, however, they are saved by two Ryusoulgers. 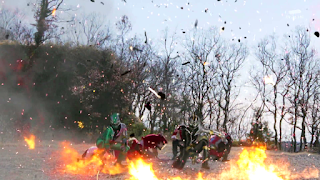 Having responded to their invitation why late, Ryusoul Green and Black appear and steal the spotlight with a battle against Gaisorg Rita. The two Ryusoulgers don't struggle at all in this fight which prompts Rita to take Kagura as a hostage in desperation.

I seriously don't like how they use Kagura in this special.

Ryusoul Green and Black don't hesitate at all with this new hostage development and instead show off their own powered up forms. 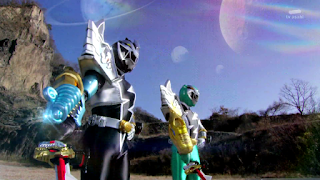 The blue arm gives a stretchy whip that allows Ryusoul Black to save Kagura by pulling her away and the gold arm gives Ryusoul Green super speed which he uses to finish off Rita.

With the battle won, the Ryusoulgers take their leave and the Oddball Team watches them off while commenting that they must be new warriors and perhaps the strongest. Clearly hyping the next season.  Everyone cheers victory while Stinger arrests Rita. 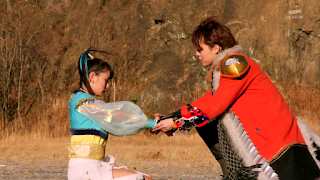 Now it is time for all the wrap up. They point out that Marvelous should have picked up Luka by now, but he ignores it. Everyone prepares to leave when Takaharu finds a small piece of the gem in his pocket and gives it to Yamato so he can have his wish granted. They don't say whether or not it can but it shouldn't considering they needed all that energy for the giant gem to make one wish.

Before the episode ends, we see someone picks up the Gaisorg helmet. Also, the stranger from the last episode appears again in the cave the Ryusoulgers were in and gives one last cliffhanger to prompt you to watch Ryusoulger. 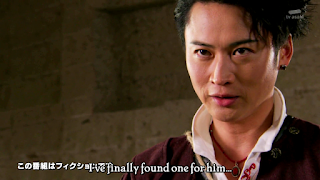 The last thing we see is a teaser for Ryusoulgers.

This was the final part and sadly, it is the weakest by far. The finals of the Tournament never happened as Martial Arts Team was simply teleported away in the last episode. I didn't think much of that last time because I thought it was leading up to something, sadly no. This was a let down and raises the question, why didn't Rita teleport the Oddballs away the same way to keep them out of the way? Also, Yamato wanted to revive a dead kid and keep his promise to him, we never got to know how that resolved. Another thing, they never attempted to go see if the original guardian was still alive or not.

Another issue is one that has plagued a lot of Super Sentai, the resolution is too fast and easy. Gaisorg was this crazy threat but was reduced so heavily that it made the armor look like a complete pushover. Seeing Rita enter the armor was a cool twist; having her instantly lose to the Ryusoulgers was a cop out. Clearly, this was an attempt to hype up the new Sentai rangers, but it just made Rita look like a joke. Also, Ultimate Dai Satan, a demond strong enough to destroy the universe in seconds is taken out with a volleyball attack and not one Super Robo was just down right terrible writing.

One last complaint, I will never stop stressing how badly used the female rangers are. Luka got to look cool but she was barely used and Kagura was constantly subtly treated as inferior to all the others. It really bothered me when she was easily taken hostage.

However, despite all the many problems, as a whole, it was still a fun episode and if not for being the finale to what was a great miniseries so far, it probably wouldn't have bothered me as much. There was some good action, plenty of fanservice, and the acting was still great. Does the good outweigh the bad? I'm not really sure. Overall, while it was not a great ending, it was at least good enough to not have ruined the overall miniseries for me and for that I will give it a pass. 2.5/5
Posted by Cendoo at 12:00 AM