When I heard that Super Blue Fighter existed, I thought that was a game based on the wrestler, The Blue Meanie.  Turns out that was not the case.  Nope.  Instead we have a neo-retro game that's trying to emulate the classic arcade games of the 1980's.  There's nothing wrong with that whatsoever, but how does it do at trying to be a game from that era?  Find out in my review of Super Blue Fighter for Steam.  (Click on "Read More" to read the full review.) 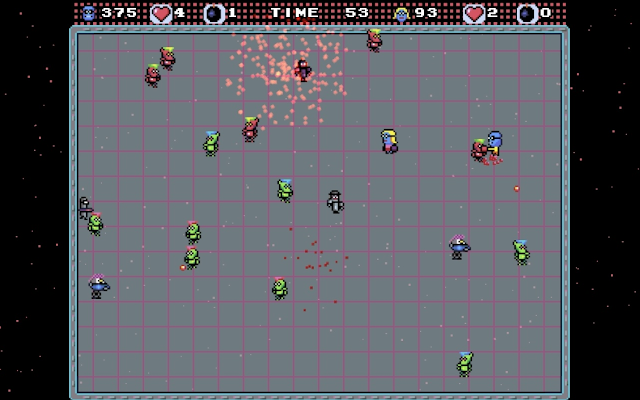 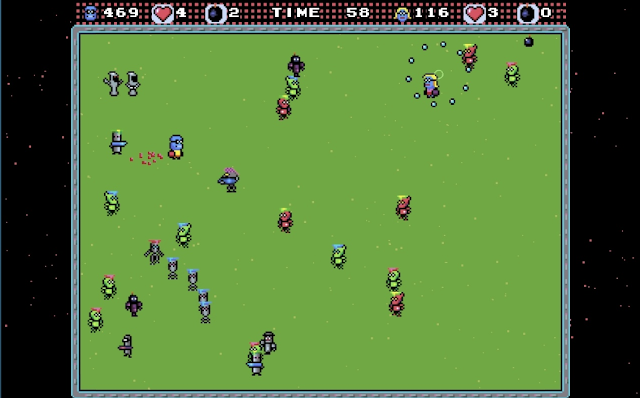 The gameplay is super simple and when I say that it's "super simple", I really mean it.  You play as a blue guy that must rescue robots that have been scattered across the field.  Now, there are two types of robots that you can save, red and green.  Here's the kicker, you can only rescue one color per stage.  Trying to figure out which colored robots that you must save was a very, very, veeerrrrryyyyy confusing experience at first.  It felt like that I was playing Russian Roulette when it came to saving robots.  Because if you touch a robot that you are not supposed to, you will take damage.  The way that you are supposed to know how to save certain robots is by looking at the stars in the background.  If they are red, save the red, and if green, save the green.

Keep an eye out for gray robots, they will do what they can to put a stop to you.  Whether they'll be shooting bullets or spawning more colored robots to drag out a level, they are a threat.  You aren't fully defenseless though.  You have a certain amount of bombs that can be dropped and the more robots (both good and bad) that you catch in an explosion, the more bonus points you get.  Bullet power-ups will also spawn and these launch special bullets that will wipe out what they touch.  (The sole reason as to why they are called BULLET POWER-UPS!)

It's a throwback to early-80's arcade games and it feels very authentic making for a fine tribute.  There's no real endgame, just get as many points as you can, so you can get your name on the scoreboard.  The difficulty curve is fair.  Each level becomes slightly harder than the last.  The controls are smooth and responsive, so you don't need to worry about the game ruining your run.  The only person that you need to fear ruining the game is you. 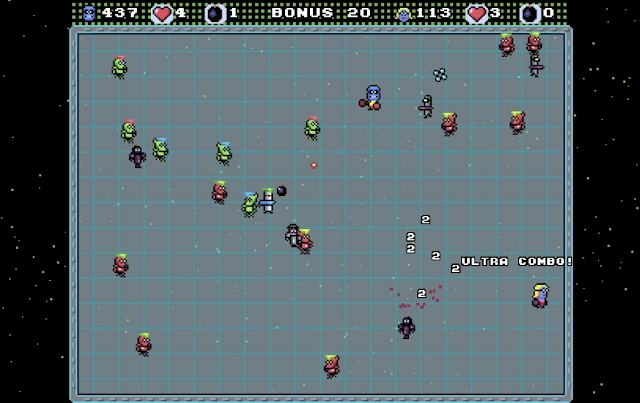 The graphics have a lot of retro charm.  Think back to the days where the 16-bit consoles ruled all and you'll be on the right track as to how this game looks.  With its simple, small, and fuzzy sprites over a big, gray, grid-filled field and a black, starry background.   It looks a lot like a port of a classic arcade game that has been up-rezed to run on a Sega Mega Drive.

If you have no nostalgia for the games of old, you will look at this game and think very little of it.  In-fact, you'll probably think that this is a very ugly looking game.  Well, it is an ugly game even if people were blinded by nostalgia, but it's the fun kind of ugly.  Reminds me of a game you'd find on Action 52 for the Mega Drive, or any game released by Codemasters for that same console.  It's sexy ugly, baby. 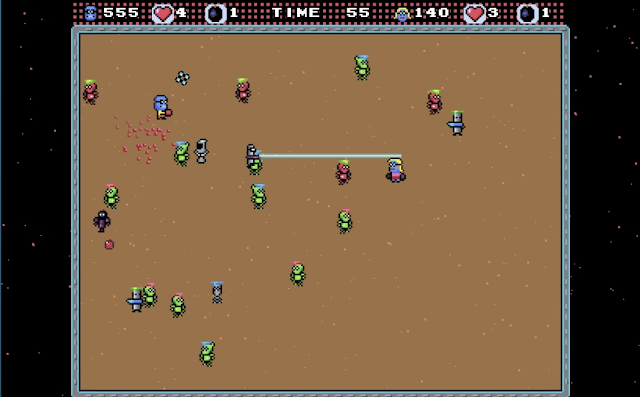 The soundtrack doesn't sound bad, but it is quite generic.  It also doesn't work with the arcade vibe, with it's beefy 16-bit space rock sound for the menu.  What works even less is the music that plays over the gameplay.  It has very wimpy sounding keyboards that reminded me of crappy educational games that came out for the PC back in the 90's. 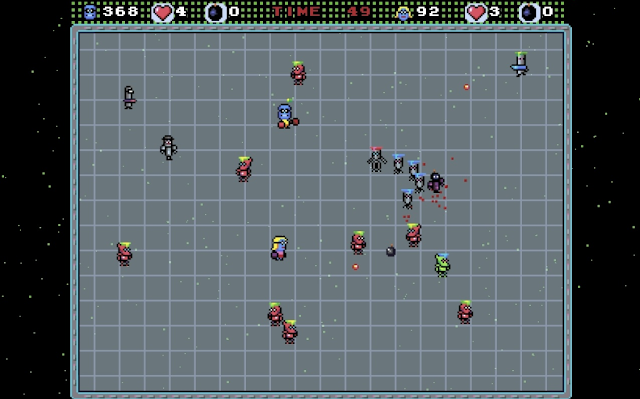 Overall, Super Blue Fighter is a fine tribute to early-80's arcade games and could use an arcade machine itself.  However, I also wouldn't go out of my way to play this game unless you have played all of the arcade classics first.  Super Blue Fighter gets a 6 out of 10. 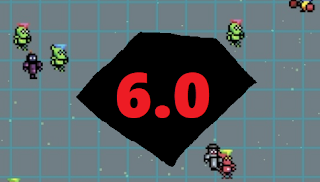 Posted by Retrokaiser at 7:41 AM