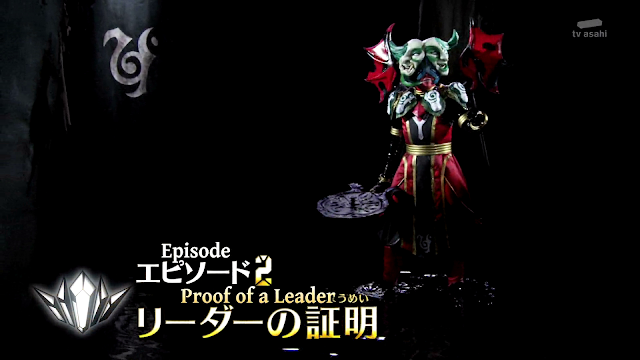 Back again for the second episode of this shiny gem season. This episode was previewed to revolve around making red the leader which, is a topic that has not been covered in awhile. Usually, red is just defaulted the leader and everyone goes along with it. Click "read more" and let's see how they handle this episode.

The episode begins with Juru getting a tour of the Kiramagers base, (the giant coconut tree looking building) where the title of "leader" is almost immediately thrown upon him. This is because the red stone is the leader of the 5 Kiramei Stones. 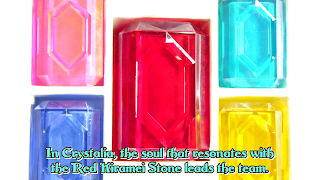 Juru is unsure about being leader and Tametomo is especially against the idea. However, before the matter can be discussed further, the alarm goes off because of another attack and the Kiramagers move out. (Except for Sena who had to be somewhere urgently.) Cut to intro!

One theme song later, the villains are plotting and vowing victory. In addition, they also reveal their current plan, which is to use a rugby themed monster. I take it this season's gimmick is to have monsters where they turn something beloved into something evil. 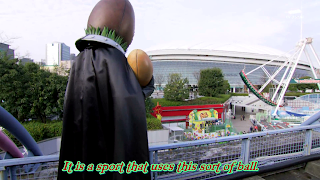 This new monster has the Bechats force a bunch of civilians into a violent game of rugby. As if that sport wasn't violent enough. Then, the football becomes a bomb that blows up a marry-go-round. This feels like a Gorenger villain. Now, the Kiramagers show up and it's on.

The rangers henshin with Juru trying nervously to play the leader role and Sena still absent. Naturally, the Bechats are easily beaten, but the Rugby monster is proving quite troublesome and is able to blow up more rides. Things go even worse when the Rugby monster targets a ferris wheel full of people. At this moment, Juru gets another artist inspiration. This time, his sketch gives the Blue and Pink mecha the ability to combine.

A smaller combination involving 2 of the core 5 rangers. That's different.

Sky Mage is able to save the people inside the Ferris Wheel, but the monster got away and Tametomo is quick to chew out Juru for failing to call Sena there.

Cutting away, we learn Sena was absent from the fight because her substitute runner got injured and she had to run the 400 meter relay for her track team preliminary. This tournament is very important to her sempai and team. Juru nervously tries to plead the cause of protecting Earth, but Sena disowns him. She says that Juru is just repeating what other people are saying and that she will never accept him as leader. Harsh. And I thought she was the high spirited one.

Tametomo points out that there is no substitute for Sena because she holds the world record so she could only replace herself. This statement gives Juru another idea. 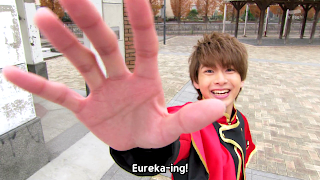 Now a new development comes. The Kiramagers weapons are made from a substance called "Blue Diamond" and Juru can should be able to transform them like the Kiramei stones. The possibilities are endless. However, to get these Blue Diamonds, the princess needs to cry them out. 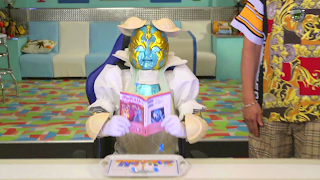 She reads a tear jerking manga in order to help with the rangers arsenal. That is definitely original. 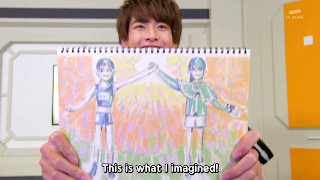 With this new imagination, a Blue Diamond doll is created. Whoever holds the hand of this doll turns the doll into a clone of themself. This doll is named Daiya-kun by Muryou. I guess that means this doll will be a reoccurring thing. 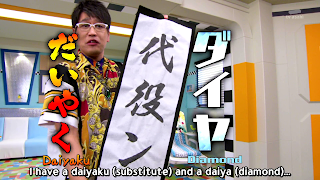 Sena doesn't seem to thrilled about the idea, but they need her speed to beat the Rugby monster. Speaking of which, this monster has returned. The blue, yellow and pink Kiramagers begin to fight with Juru and Sena joining in later. However, Sena is sulking bad. She is sulking similar to how Daiya-kun was when it became another Shiguru. I have a bad feeling about this. All 5 Kiramagers do the first proper roll-call with their team pose. 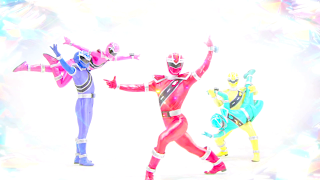 This next fight begins and quickly leads to Sena chasing after the Rugby monster. However, Sena cannot keep up on foot. Don't tell me. At this point, the real Sena races into the fight. I knew it. 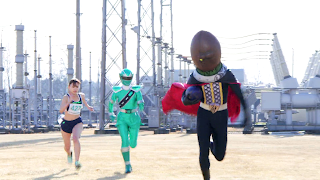 Oh no! The illusion of suit actors will be broken.

Daiya-kun throws the green Kirama Changer to Sena and she proceeds to easily chase down and defeat the Rugby monster. It is amazing how much stronger a ranger gets when they act separate from the team.

Tametomo is not happy again. He calls out Juru, calling him an idiot for bring an imposter to a real fight. However, Juru finally stands up for himself. A flashback reveals that Juru actually told Sena to stay and run in her track meet because he believes the 5 of them need to support each other in what's important to each individual so everyone can shine and sparkle. This way, even if they are in different places, the 5 Kiramagers will be one. In both Power Rangers and Super Sentai, it was a universal rule that the ranger battles/saving the Earth always came first. Once again, this is different.

Sena is praised for her victory to which she says it was due to her being able to run without regrets. Afterwards, she thanks Juru and acknowledges him as leader. Aww. At this point, Sayo and Shiguru have to leave before the monster turns giant. Those were the two that got to combine earlier. Coincidence? No.

Now a giant attack. Interestingly, the defeated enemies don't turn giant but have their remaining 20% turned into dark energy that creates a different form of them. 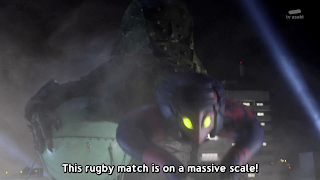 Not the same monster nor a separate giant monster like seasons past. I recall a few times they looked different when giant but this is still, different...again.

Naturally, this leads to a new combination with Red, Green, and Yellow. 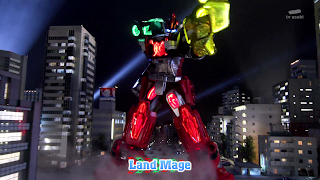 Land mage. A very simple design but, I like it. Want to bet that next episode will feature a combination of Sky Mage and Land Mage?

The giant battle is pretty good with a nice balance of CG and costume fighting. Some of the attacks are silly, but acceptably so like having an arm extend into a road so that the green car can drive into the monsters face a few times. It is a short battle that ends with the Kiramagers winning with little resistance.

The episode ends quickly with Sena, Juru, and Tametomo basically just smiling for the camera and saying variations of "we won". The end!

This episode was different, but overall pretty good. I can tell that this episode was trying very hard to stand out a little from the average season and this will probably be a recurring theme throughout the season. However, they are mostly just minor changes that still follow the grand standards. But, that is not necessarily a bad thing, sometimes minor changes are enough, especially after a few too many gimmick seasons. As for this episode, it was a strong character development episode for Juru and Sena. It showed Juru grow a little as a person and leader and showed that Sena can have emotions other than cheerful and smiling. In addition, a successful introduction the mecha combination, or Super Robo/Megazord. Overall, I like this episode, worth a watch. 4/5
Posted by Cendoo at 4:05 AM