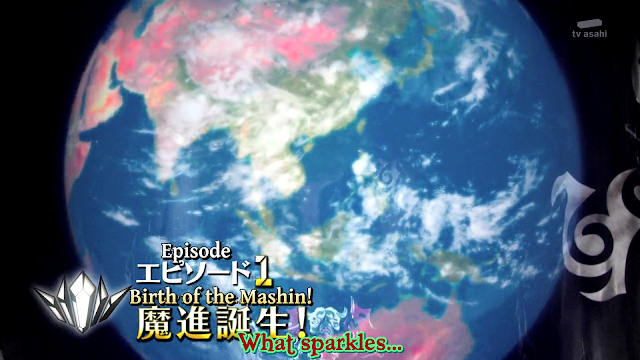 With this, the 44th season has begun and 45th Super Sentai season has begun. (Thank you Lupin vs Pat for making the numbers out of sync.) However, unlike past seasons, this one had an Episode Zero movie so, we already generally know what to expect. This is both a beginning and a continuation. So, click "read more" and let's get this train rolling.

The episode begins where Episode Zero ended, Earth is being invaded by the Yodom Army and the 4 Kiramagers that were recruited so far are mobilizing; Tametomo Imizu, Sena Hayami, Shiguru Oshikiri, and Sayo Oharu. At the same time, the Red Jewel claims to have found the 5th Kiramager.

Meanwhile, we cut back to our artist friend in high school, Atsuta Jyuuru. (Also translated as Juru.) His school is being evacuated but he ignores this because he is lost in his drawings. 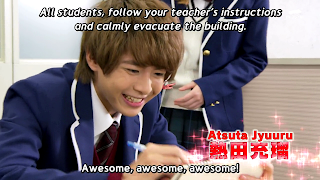 Special side note, since most of the main characters were already introduced in the Episode Zero, movie they opted to give them simple introductions with text on screen. This is a fair compromise to not make seeing the movie mandatory. I'll say it here once instead of repeating this fact throughout the episode.

As if it wasn't obvious enough that he is going to be Red.

Jyuuru does not get scared when seeing a giant octopus monster in the city because he has an overwhelming urge to draw it instead. 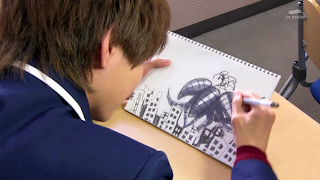 Not a bad sketch, but it took him like 2 seconds to draw that. Can any illustrators out there tell me how relatable this guy is?

At this point, Princess Mabushiina appears in the classroom and attempts to recruit Jyuuru as Kiramai Red. The Princess gives the classic plead "I don't want Earth to suffer my planets fate" and, cut to intro. Except not really, the theme song is skipped past.

Cutting back to the episode, we are now at the bad guys HQ, Yodomheim. At Yodomheim, we are (re)introduced to two of the main villains, Kurantula and Garuza. They assume two of the basic villain roles; Garuza is the creepy scientist/wizard role that creates or sends the monsters like Finster or Pierre, and Kurantula is the tough general like Goldar or Destra. This scene is basically just Garuza bragging about the giant monster he sent to Earth.

More importantly, we now cut back to Jyuuru's high school. Jyuuru initially hesitates to join, but the red gem abducts him.

After a little bit of exposition, Jyuuru finds himself with a kiramai changer and on the battlefield where the other 4 Kiramagers are already fighting. The fight itself is pretty typical; the rangers are winning easily with the foot soldiers dancing around and sort of looking like they are trying to fight back. However, Jyuuru ignores the call to henshin and is instead chooses to draw the action. 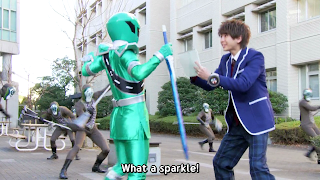 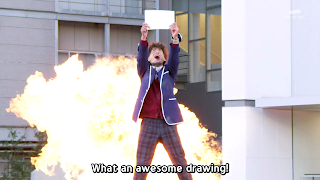 I'm all for a scatterbrain ranger, but for a Red Ranger, this guy is going to need a serious redemption moment.

After a battle with Jyuuru getting in the way, the 4 Kiramager's are not happy. All 4 power down and Jyuuru instantly recognizes all of them and enthusiastically introduces all of them, except for Tametomo who had to introduce himself. This was obviously a way to (re)introduce the other 4 rangers. Regardless of fanboying, all of them, including Jyuuru himself, cannot accept that he is the 5th member and Red Ranger.

Cutting away, Garuza has made the giant CG squid monster turn into a costume faucet monster. 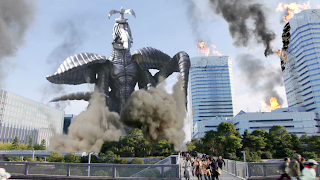 This giant faucet starts spewing sludge all over town, so, the Kiramagers, (minus Jyuuru) go to deal with it. This team doesn't have a super robo or individual mechs yet, but they attempt to fight anyway.

Elsewhere, Princess Mabushina asks for Jyuuru's changer back but accidentally sees his sketches. While flipping through the sketch book, Mabushina sees a weapon combination that hasn't happened. 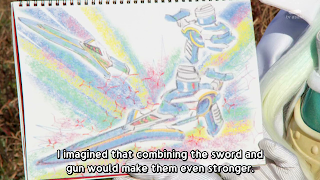 This appears to be Jyuuru's gimmick, his imagination grants good combat ideas like a psychic. He imagined a weapon combination that the rangers weapons are conveniently compatible to do. Even more impressively, he imagined and sketched the Megazord Super Robo. 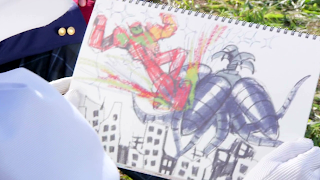 Anyone remotely familiar with this franchise could have imagined that. Especially in-universe.

This talent is mind blowing for the red gem and Princess Mabushina because back on their home planet, only the king could draw something that didn't really exist. Geez, that planet's civilization would worship Dr. Sues.

Having received his first compliment, Jyuuru is now confident enough to join the team. In addition, he draws another sketch, this time of the red gem turning into a car. Luckily, the red gem has the ability to turn Jyuuru's imaginations into reality. And that will be the cop-out explanation for everything. Turning imaginations real, they would make the Toqgers proud.

Meanwhile, the other 4 Kiramagers aren't doing so well against a giant. Luckily, Jyuuru's car is also spiderman. 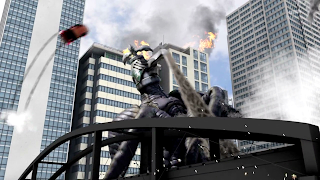 That car jumped off the bridge, drove up a building, jumped to another building, then smacked the giant in the face by driving into it. The one pro of CG is being able to do silly stuff like that.

Some students are stuck on top of a building because they were trying to take pictures of the action. Still not as stupid as the selfie deaths. Fortunately, Jyuuru gets another idea and draws a red fire engine. 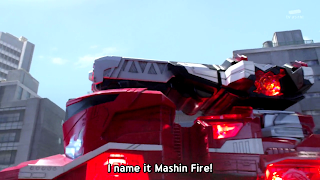 When did this show become the illustrators edition of Scribblenauts?

With this, Jyuuru is able to save the students and push back the giant a little, but not defeat it. Sayo asks Jyuuru if he can change the form of everyone's gem as well which naturally gives him inspiration. I think this is the first time the mechs were designed by a ranger. Not counting engineers later turned rangers. 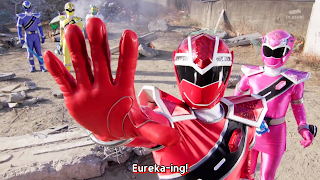 Had to show this. I think it is the first close up of the glove's palm in any season.

Jyuuru designed all the mechs based on the traits of the ranger, except Tametomo who was based on his color. uncool to yellow. Now it is time for a giant battle. Before any combinations, we get an individual mech battle. I've always been a fan of those. This fight is pretty enjoyable with good action and humor. The rangers even clog up the faucet nose by having yellow throw stuff in it and pink use giant bandages to wrap it up. Every mech gets a moment to show off an ability. Now for the finishing move. 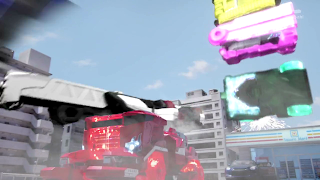 Kiramei Stone Bomber! Red spins the ladder around and shoots the other 4 mechs at the monster. That's pretty basic and lame after everything that just happened. Somehow, that works, the monster goes boom and the episode ends with Princess Mabushina narrating her confidence in the 5 warriors.

Bonus content! During the credits, the red gem asks Jyuuru what he would have named him if he remained a car instead of becoming a fire truck. 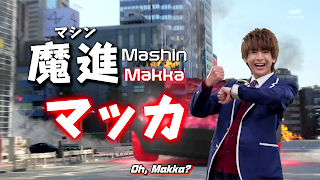 Mashin Makka. The red gem is relieved to have become Fire instead. Nice quick way to sneak another potential toy add in.

This episode was pretty good and did everything it needed to as a season beginner, almost. Sadly, Episode Zero probably held this episode back in some unintentional ways. Everything had to be re-introduced in case the viewer didn't watch the Episode Zero movie, but at the same time it went light on details in case the viewer did. What I'm referring too is the introduction of the characters and settings. Besides Jyuuru, all development and introductions were brushed pasted pretty quickly. From what I can gather, Episode Zero was meant to introduce everything except Jyuuru and have this episode focus on him. That would have been fine, but inconvenient for anyone for missed the movie. Even with Episode Zero, the other 4 Kiramagers have only been given basic introductions with token personalities.

Regardless of introduction confusion, this was still a solid episode. I will admit, this season has a very different red ranger than I have seen in the past. Hopefully the other rangers will receive interesting writing as well. Until then, I'm at least peaked enough to keep watching. 4/5
Posted by Cendoo at 12:00 AM