This should be an interesting Sentai because it was their 30th anniversary season. GoGo Sentai Boukenger or Rumbling Squadron Adventure Ranger. A treasure hunting themed season. Will this season be a treasure? Click "read more" and let's take a look. 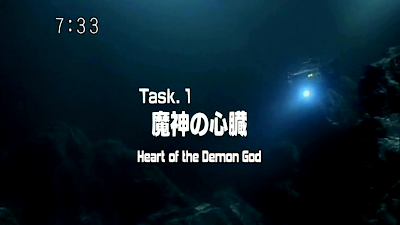 The episode begins with a narrator giving backstory to a foundation called SGS. They are a nongovernent organization that hunts for lost treasures such as relics and endangered animals. Playing through this narration are the Boukengers inside of their Mechas. It appears the team is already assembled. Cut to intro!

One theme song later, the Boukengers are exploring underwater. Bouken Black, Yellow, and Pink are sharing a ship. For the sake of introductions, the show is looking for excuses to name drop the rangers.

This exploration continues, until they find what appears to a remnant of the lost Goadom civilation. The Heart of Goadom, said to have been used to control the sea. I wonder if these are based on real myths or made up for the season. We also learn the artifacts that the Rangers hunt for are called "Precious". Sonic Shuffle anyone?

BoukenBlack and BoukenYellow are sent into the ruins to find the Heart of Goadom. Turns out, the two of them are test candidates for the Boukengers. Intro already told us who the Boukengers will be so, any "what if" is lost instantly. Inside the ruins, the two Rangers find a shrine where BoukenYellow turns a switch that triggers a fire trap. What kind of trap has to be manually triggered? 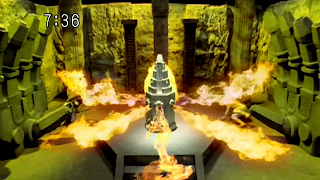 BoukenBlack blows up the shrine to stop the flames. Afterwards, BoukenYellow finds a puzzle inside of it. 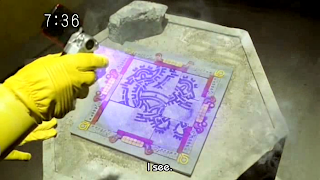 There is a toy that could sell itself.

BoukenBlack solves the puzzle which causes the two giant hands to come alive and grab the two rangers. Also, the entire ruins begins to rise from the ocean.

Now, the villains are being brought to life. So one of the main threats is BoukenBlack's fault? This should be interesting. 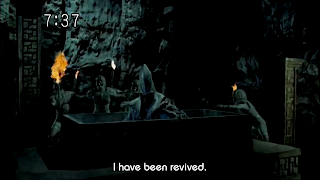 BoukenRed drives into the ruins and saves Yellow and Black. Back on dry land, a little character development is given. But, just to get all of that out of the way, let's breakdown the core team right now. 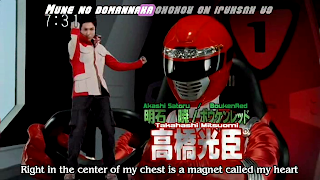 Satoru Akashi - BoukenRed. A calm yet hot blooded leader Once a young enthusiastic treasure-hunter who was known as the "Immortal Fang", but retired after suffering a tragic loss. Now, the SGS brought him out of retirement and has become a workaholic. 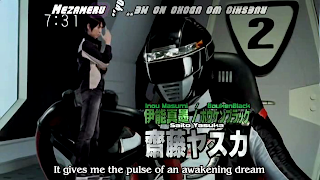 Masumi Inou - BoukenBlack. A former thief or self-proclaimed treasure hunter known as "The Immortal Fang" and one of the rookie members of the group along with Natsuki. He is out for revenge for his lost excavation group and only joined the team to repay Akashi for saving his life. The ranger who likes to attack first and ask questions later. 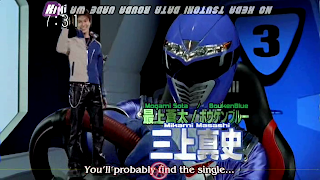 Souta Mogami - BoukenBlue. A former spy & information expert of the team who excels with computers and digital technology. He is the brains but is also known for being cocky at times. 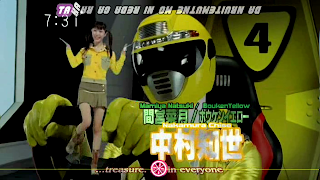 Natsuki Mamiya - BoukenYellow. The second rookie in the group along with Masumi. An amnesia case who clings to Masumi like a little sister after he saved her from being trapped under a rock. She is the one always smiling; a little naïve but easily excited and impressed. Has a habit of speaking in the third person and can see into the short immediate future. 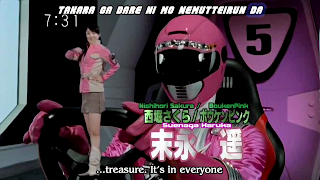 Sakura Nishihori - BoukenPink. The "sub-instructional" member on the team and a former Self-Defense Force official. She has a heavy background in combat and martial arts and is skilled with machines and shooting. Often, she is the serious, level headed member of the group who can occasionally be a little bossy.


The 6th hero will come later.

The Precious still has not been found so it must be deeper in the shrine. Sakura suggests that the 2 rookie members, Natsuki and Masumi retreat for now, but they race ahead of them instead. At least they got spirit. Once inside the shrine, Natsuki finds a secret room that is huge with a small bridge over lava. Masumi almost falls off the collapsing bridge when the other 3 rangers, Red, Blue, and Pink, catch up. All together, they race across the bridge. 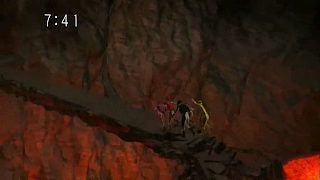 I do not miss outdated CG effects.

Finally, the Goadom's Heart is found. 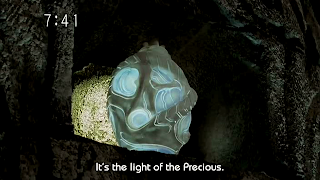 Before they can pick up this Heart, it flies away and multiplies. Souta is about to touch one when Natsuki has a vision of it exploding and saves him. The first act of psychic abilities. Satoru punches one of the bombs into another and a chain goes off destroying all of the fake hearts because he said the real one could survive a little explosion since it survived being at the bottom of the ocean. Is that real science? I don't know.

Now the fun starts. Akashi, Souta, and Sakura all power down claiming mission complete when Masumi betrays the team. He grabs Natsuki and the two of them attempt to make off with the Precious claiming as The Immortal Fang he has no more use for the Boukengers. What a dillhole. Matsumi throws back his changer (the Accellular) and plans to sell the Heart and live a comfy life. However, Natsuki doesn't want to stop treasure hunting. Before anything else can happen, the revived being from earlier arrives to claim the Heart for himself.


Masumi get's knocked off and falls towards the lava but clings onto a ledge. Akashi tells the other three to go after the Heart and jumps down to deal with Masumi himself. 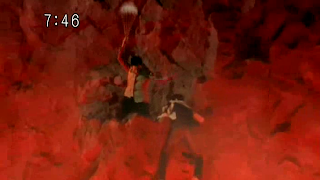 I had to show this. If the grabline hook wasn't enough their ACcellulars also have little parachutes. How those tiny things can support their weight is not even worth debating.

Akashi gives Masumi a choice to either join them or fall into the magma. But no pressure. He also apparently knew that Masumi would try to betray them and that if he hadn't escaped then he'd be no use to Akashi's organization. That is different. Most Red rangers would just save them and let them re-join on their own accord.

Meanwhile, back outside, the remaining 3 Boukengers witness this revived old guy drop the Heart into the shrine where it turns red and comes to life. 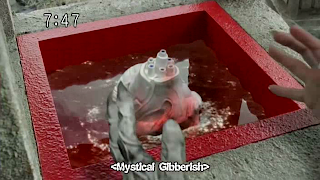 Quickly cutting back inside, Masumi vows to one day surpass Akashi as the greatest treasure hunter but will join his team until then. At that moment, Akashi falls into the magma, but was able to survive it by henshining into BoukenRed. The two of them leave.

Back outside, Sakura, Souta and Natsuki have begun the first ranger battle, and it is not going well. All three are taking hits and explosions left and right by the footsoldiers. At least, until Akashi joins in and then all of a sudden, everyone is competent and actually use their weapons. The rangers do their first role-call while destroying foot-soldiers. Masumi then makes his entrance by being part of the line-up and destroying a gunt himself. Not bad. 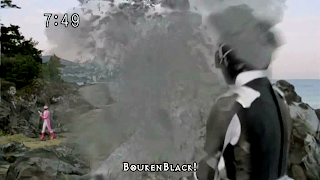 However, the rangers were too late to stop the ritual and a giant is born. A Giant God Goadom. 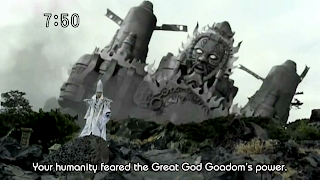 These perspective shots accomplish a lot.

Time for the Boukenger's first giant battle. We actually get some individual mecha fighting before the combination while the rangers restate their mission. To protect the Precious and their great powers from being used for evil. A very simple, but acceptable setup. Now, Bouken Formation!

A classic transformation sequence is used. One that is slower but more robotic like and does not rely solely on CG. 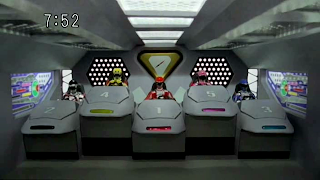 DaiBouken is formed. This giant battle has the two sides exchanging a few punches while cutting back to the rangers in the cockpit. (As tradition.) It is a classic slow fight which mostly punches and no big CG.However, they do show off a couple of DaiBoukens signature moves; one of which is hitting the ground with a pickaxe to create a small earthquake attack. Another move, is digging the ground beneath the monster.

Time for the finisher. DaiBouken's pickaxe and shovel combine into a sword, GouGouken, and they use the attack called "Adventure Drive", which is basically a finishing slash attack. 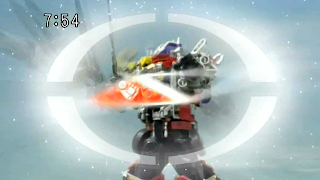 The giant goes boom, the Precious is retrieved, and the Boukengers have earned a mission complete. Funny enough, they collect a Precious with a card that turns into a box.

The episode ends by implying that there is still some tension between Souta and Masumi, and more importantly, a warning message from the revived villain from earlier. He fires an attack at the Boukengers, says his name is Arch Priest Gajaa, and states that as long as he is alive then more Giant God Goadoms will be revived. Then, he is eaten by a sea creature. What? 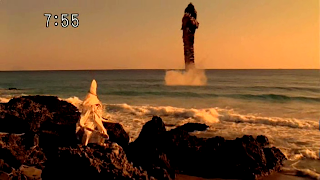 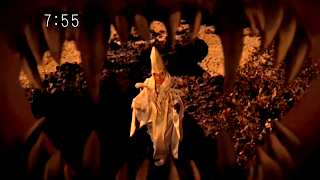 The end! No explanation given. Have to wait for episode 2.

This episode was different, not great but okay. The Boukengers seem interesting enough characters, skipping to the action and leaving exposition for later was a nice way to hook an audience, and the treasure hunting theme is something new at least. However, everything felt pretty standard, not bad but just average. I suppose I don't really have anything to complain about on the other hand. Overall, this episode did everything it needed to in order to introduce the season, not getting any anniversary vibes yet though. 3/5

A strange in-between time for Sentai this is, not classic but not modern. Especially, with the special effects.
Posted by Cendoo at 12:00 AM