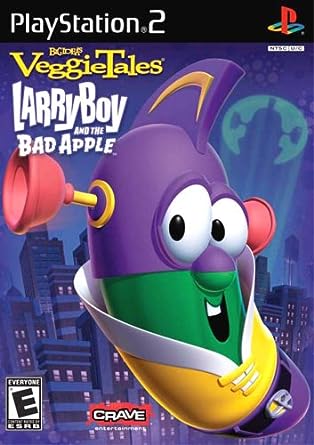 Well here is something different, a random PS2 game I found at a pawn shop. I have always been a big fan of VeggieTales and had no idea this game existed, so I got curious. Granted, a childhood cartoon made into a video game is a recipe for disaster, I was still very curious. How did this  Larryboy title fare? Click "read more" and I'll explain in my review.

Since this is a movie based game, the story is a retelling and abridged version of the movie with the same name. This story is a simple superhero kids story about teaching kids about "temptation". Basically, the lesson that things like video games or junk food are okay in moderations but can be trouble if you overdue them and it is important to ask for help if you fall into your own temptations. It is a good enough story for kids, but the real question is how well does this game represent it. That question, brings me to the cutscenes. 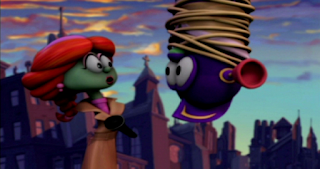 Naturally, the cutscenes are just clips taken directly from the movie and they are used to tell a large part of the story. Since the movie/series was already CG, this translates well, unfortunately, one too many important scenes are skipped over. Two that come to mind are the scene where we learn about the origin of the villain, the Bad Apple, and the other one is where we actually learn what the Bad Apple's plan is. That being said, the story is still complete enough to where if someone did not see the movie then they can still get an okay experience.

Besides the movie cutscenes, a lot of in-game dialogue between Larryboy and his butler Alfred are used to progress the game and fill in some of the stories gabs. Surprisingly, there actually exists some funny dialogue, and the narration is enough to keep the story moving forward. 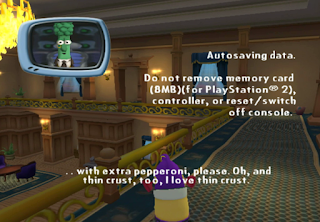 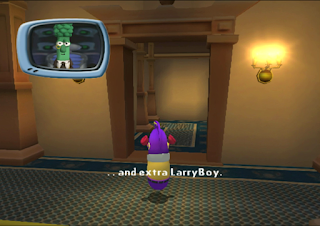 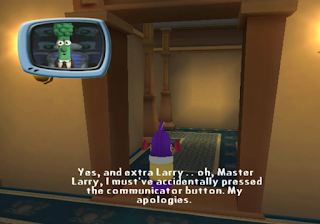 However, one thing I know will not go over well with many players are the overuse of one-liners. Personally, I like a good pun or one-liner, but this game will play them everytime a special ability is used and there are often only 2 that cycle back and forth. It gets tiresome to say the least.

As a whole, the writing in this game is passable. There are some issues and a couple important scenes missing, but the story holds together and enough dialogue is good.

The game play is this title is a simple point A to B 3D platformer with music notes and music sheets used as collectables. There are 5 stages and 1 hub, so, it is not a very long game. Each stage is based on a specific characters "personal temptation".  After the first 3 stages you unlock new abilities. Sadly, these abilities don't affect game play and just allow you to clear obstacles.  Three of this stages are based off the 4 temptation worlds from the movie and 2 are unique to the game. (So, the game has more temptation worlds than the movie but is also missing one. Strange.) 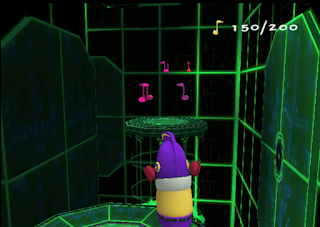 Collectables unlike songs from the Veggietales series, cutscenes from the game, and 3 minigames. Not great motivation to 100% the game. Those three minigames tic-tac-toe, darts, and a memory matching game. Pretty basic minigames, but 2 are made interesting by using Larry's glide to play them. 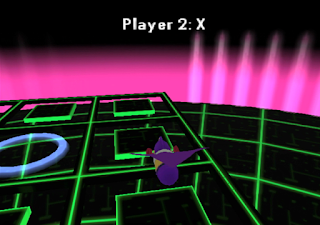 The hub serves mainly as a way to go from stage two stage, but also has a couple glide challenges and a hide-and-seek game with 10 kids. 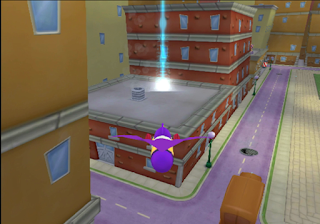 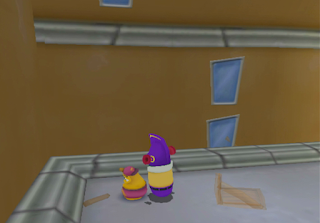 Every stage ends with a boss battle, and these battles are terrible. They are too easy and often involve running back and forth a lot which is a test of patients. Each boss gets a little better with each stages but they never reach a "fun" level.

Controls are a little floaty, but never game breaking and they get the job done. There are odd placements of invisible walls and Larry hoping everywhere can give some people motion sickness.

Overall, the game play is very safe. Nothing new or experimental is found here, it is just a very typical by the book platformer. There are some issues, but none are game breaking and  That uninteresting place of not great or terrible, just okay.

The soundtrack features a lot of tracks from the show which is famous for their singing. Also, all of the voice actors from the show are in this game Sound effects are all acceptable. That being said, there are some issues. As stated before, one-liners get old fast and there isn't any boss music which makes bad boss battles even worse. Overall, I give the audio a pass, not bad but could be better.

Any game based on a franchise that is already CG has the misfortune of being compared to the graphics from the show, especially when the game shows clips from the source material. Naturally, the game does not as good as the show, but they are acceptable graphics for PS2 standards. NIce and colorful, but not overly detailed. 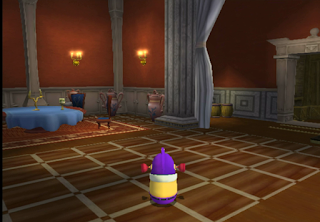 Level designs are linear, as in not much exploring aside from collectables and the occasional hidden challenge. There are puzzles mixed in to keep the pace from getting too stale. Interestingly, there moments in the later stages that had me stuck in place for a fair amount of time. Although, I'm not sure if that was due to bad level design or good puzzle design. As a whole, presentation gets a pass.

All and all, Larryboy for PS2, is average. Not bad, not great, just something in the middle, okay. One could argue, since this was just a kids game based off of a kids movie, then just the basics of game play and storytelling are all this game needed to do. However, I feel like there is a reason I never heard of this title despite growing up with Veggietales. It is unlikely I will ever come back to play through this title again and I cannot recommend anyone going out of their way to play it. But, for what it is worth, I am glad to have  added this to my list of games I have played through.