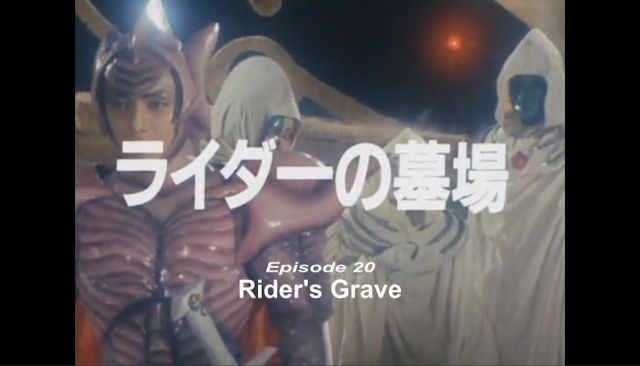 Closing 2019 and the 2010's off with a bang.  This is my summary and review of Kamen Rider Black episode 20.  Have a Happy New Year, you filthy animals.  *Shoots readers with a tommy gun*  (Since you survived the shot, click on "Read More" to read the full article.) 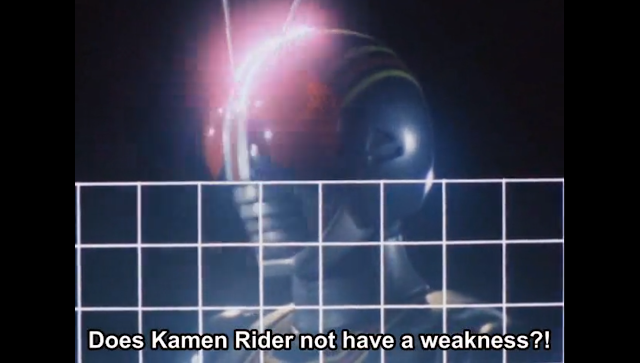 We open up this episode with the Golgum looking up YouTube videos on how to defeat Kamen Rider.  Going though the tapes of previous fights just frustrates them, so they pull out Kamen Riders blueprints to find his weakness.  The Golgum discover a huge flaw which is that Kamen Rider doesn't have any weaknesses.  Birugenia comes in, only to taunt the Golgum about how they can't kill the Rider.  This makes the Golgum all worked up and they are like, "Oh, yeah! Well we can too kill the Rider, you little guy dressed up as a big shrimp". (They didn't really say that, but that's the general gist of that conversation.)

Kotaro is riding like the wind, only to stop by and help a little girl trying to find a doll that her mother threw out.  (Mothers tend to do that.)  They can't find the doll, so Kotaro takes her home.  Yukari (the little girl) is promised a new doll by her parents.  Yukari isn't having any of it and she just carries on like me when I don't get enough people watching me on Twitch.  (That's www.twitch.tv/emeraldrangers.  Give us a follow.)

Kotaro says his goodbyes and promises to come back to visit. Unaware, Bat Mutant is watching this whole ordeal take place.  The Golgum get the report and conclude that Kamen Rider/Kotaro does indeed have a weakness.  His heart.  No! I'm not saying that they are going to rip into his chest and play doctor.  By "heart" I mean that Kotaro is a kind and gentle person.  The Golgum plan on exploiting that to get to him.  Well, that and also with the help of a sexy plant lady monster, Anemone Mutant. 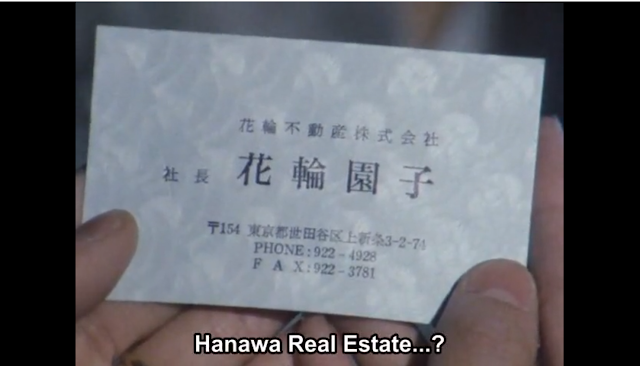 Taking full advantage of Kotaro's promise to return, the Golgum send out Anemone Mutant disguised as a real estate agent.  She and the Golgum buy Yukari's house and send Yukari and her family to a fancy house that was bought for them.  (Umm. It's free real estate?.)  Now Anemone Mutant and the Golgum wait patiently for Kotaro to arrive.  One day later, Kotaro rides down to visit Yukari, unaware that it isn't her house anymore.  The convenience card has been played, Kotaro runs into Yukari who is still looking for her doll.  She tells Kotaro about what happened and they find the doll inside the house.

The house suddenly becomes haunted and Kotaro gets forcefully tangled in Anemone Mutant's vines, Evil Dead style.  (Minus the penetration.)  Yukari chucks a hissy-fit and tries to escape, but she doesn't find freedom, only Zool.  Yes, she gets captured, dragged into the fridge, and sent to another dimension.   IT'S HENSHIN TIME, BABY! Kotaro morphs into Kamen Rider and battles the dreaded fire-breathing house.  The heat gets to be a bit too much, so Kamen Rider calls in Battle Hopper.  Battle Hopper bursts though the wall like the Kool-Aid man and sinks into the ground, into another dimension.  *Sad trombone*

Kamen Rider gets caught in some vines again.  The Golgum show up to taunt him and then we see some creepy hands trying to take off his belt like the kinky bitches they are.  Kamen Rider uses his Multi-Eye ability (it lets him see stuff via infrared) and finds the cause of this illusion.  The doll is to blame, or so it seems.  Turns out that it is one of the Golgum members pretending to be the doll.  The Golgum member runs off and the house returns back to being in it's natural state, a non-haunted house. 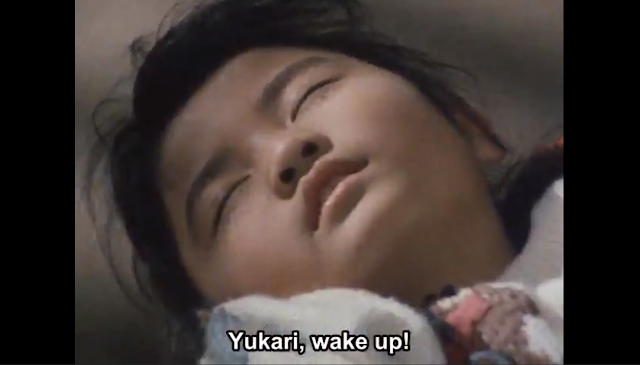 Kotaro de-morphs and Yukari's parents turn up.  They end up finding Yukari lying on the floor, where the fridge used to be.  They also find the doll and everything looks to be a happy ending.  Sadly, Kotaro has fallen for another trap because Yukari and her parents were really the Golgum in disguise.  (OH NO!)  Kotaro gets dragged off into another dimension where he is reunited with Battle Hopper and the real Yukari.  The Golgum throw down the gauntlet and they'll let them all go if Kotaro defeats Anemone Mutant.  Sadly, there's one little catch.  Kotaro is not allowed to morph.  For if he does, he'll trigger an explosion that will blow up the entire alternate dimension with all of them in it.

The Golgum cheat and send in one of there members to join the battle.  Kotaro gets beaten, strangled, and pollinated but manages to dodge one attack that ends up hitting Anemone Mutant.  Anemone Mutant is flung into the electric cage where Battle Hopper is kept prisoner.  Kotaro sends Yukari away on Battle Hopper to where she is free from this explosive shadow realm.  Kotaro morphs into Kamen Rider, beats up Anemone Mutant with ease, gets out of there, and the dimension blows up.  The Golgum just shake their fists at him and go away.

Yukari's parents are enjoying their new fancy home until it is revealed that their new house was an illusion.  They return to their old house in tears.  Yukari is happy that she has her doll back and shares some laughs with Kotaro, while Yukari's parents are still crying over the loss of their fancy new house.  *Cues Full House's closing theme* 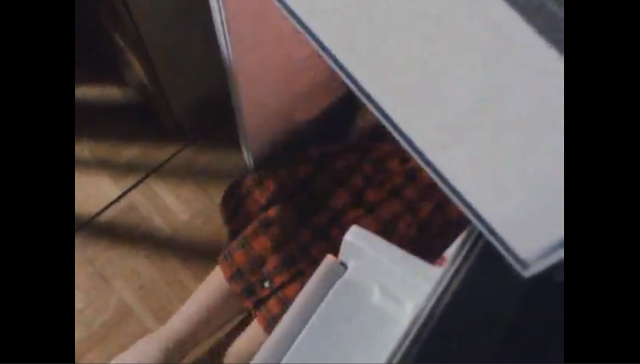 If you like trippy episodes about screaming kids, sexy plant ladies, non-sense plot, and haunted houses, you'll get a huge kick out of this one.  The story itself didn't make sense at the least, but I wouldn't say that it was terrible.  It was quite fun and entertaining.

It is interesting seeing that the bad guys are becoming more desperate with each coming episode.  It leaves them to come up with some creative ideas.  I wonder if this is what it felt like to be one of the writers of this show.  This weeks plan, stupid as it was, I liked how they obtained what they needed.  It was oddly very clever and very dumb at the same time.

The vibe of this episode felt like something you'd see in a Halloween special.  To a young child, it's a very scary episode.  As a grown-up, the atmosphere is only slightly off.  If they had a monster that was a bit more supernatural themed, the haunted house would've had more effect.  Sadly, we got a plant lady.  Okay, she wasn't a bad bad guy, but I would've used her in another episode. 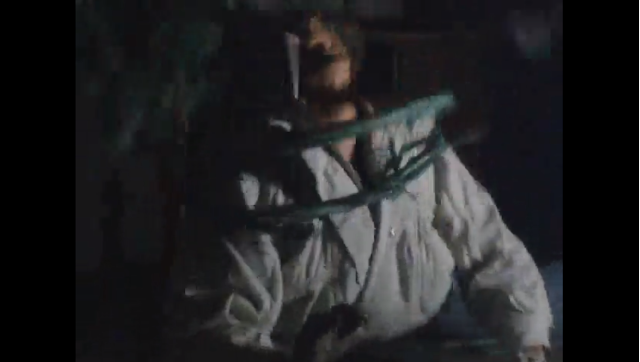 The one-off characters introduced in this episode could've been much worse.  Yukari is constantly crying, but her feelings are justified.  I'd act like that too if my mother just threw out my favorite toy just because it was a little dirty.  Funny enough, the doll was pretty clean, making the mother out to be much more of a mean spirited character than intended.

The action, sets, and effects were all good and it added that layer of suspense, excitement, and interestingness.  I really felt like I was looking at a haunted house and I really did feel like that I was looking into alternate dimensions.  It makes you forget that you are watching a TV show and it really draws you in.  Well, until the explosive final act ruins the mood. 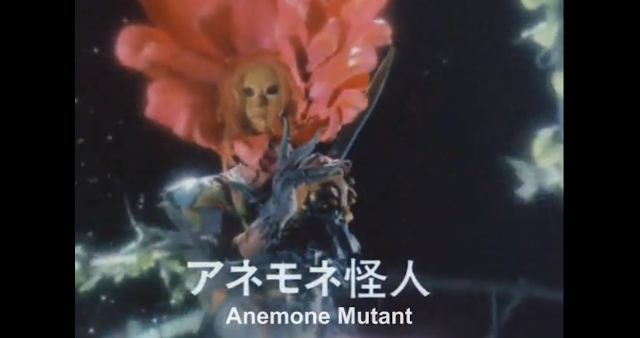 Anemone Mutant's costume is really awesome.  She came off as strong, menacing, scary, and a good match for Kamen Rider.  This is great considering that I don't find plant themed baddies to be all that menacing.  Also, great to see that the Golgum are getting more active in the battles.  We get to see their dark and mysterious powers in use quite a bit in this one.  I wasn't disappointed as they are powerful and give Kamen Rider a run for his money.  I am interested to see how Kamen Rider will defeat them.

Also, not that much of the Kamen Rider suit in this episode, it's mainly unmorphed action.  You know what? It worked.  Kotaro is an interesting character and seeing this character rely on raw skill was a nice breath of fresh air.  It also gives the vibe that the character has gotten stronger and gets you excited to see that he is closer to being able to take on the final bosses. 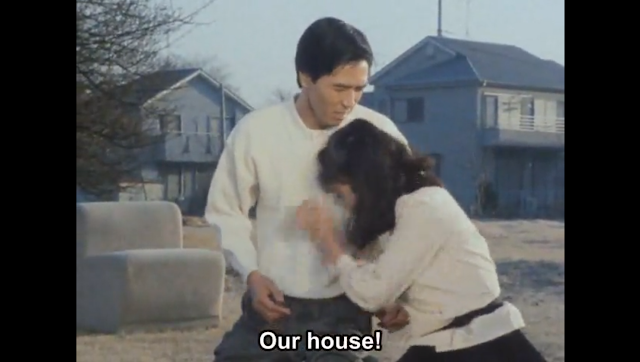 Overall, a lot and lot and lot of broken logic in this episode but it was a pretty fun watch.  I give this episode a 6.9 out of 10. Have a safe New Year's!
Posted by Retrokaiser at 10:25 PM