Kaitou Sentai Lupinranger VS Keisatsu Sentai Patranger Number 39: Bet It All on This - Summary/Review 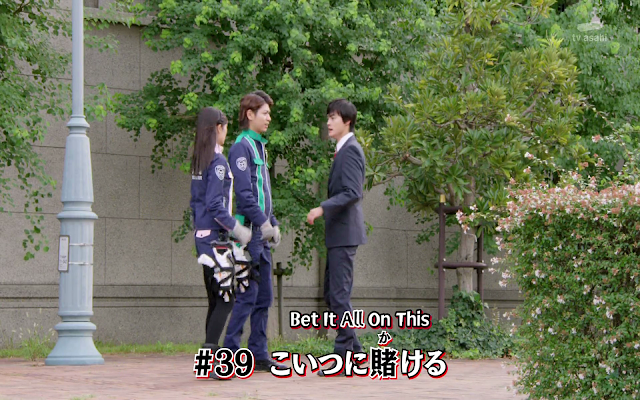 The plot continues. Last episode's preview teased a new power for LupinRed. As if the Lupinrangers need any more power. Click "read more" for the full coverage.

The episode begins at the Patrangers HQ where Noël Takao is stealing more intel from them. He learns about a double gold safe Gangler from their computer. (Zamigo. The ice Gangler that killed the 3 core Lupinrangers loved ones.)

Noël Takao attempts to question Umika and Tooma about Zamigo, but they keep secret about the topic.

Meanwhile, Keiichiro is still trying to get close to Kairi, but with no luck. However, both of them spot a Gangler attack and are forced to go to the same place anyway. Ain't that some basic set up for you.

One theme song later, the Patrangers spot this week's monster of the week, the one who got iced from last episode.

Turns out he wasn't killed, just  transported. Poor guy. Had to be frozen while his bro Gangler was destroyed.

Patrangers henishin and begin fighting with Kairi watching in secret. The fight doesn't last long. Iselob uses his collection piece power to make the Patrangers float which makes them unable to dodge the ebi fried missiles and he leaves in the smoke. Why do I get the feeling that fight was only done so Kairi would know what to expect? Also, looks like there was another mysterious stranger watching the fight. 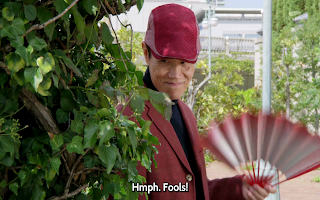 This obvious villain brings great shame to the flat cap.

Cutting back to the Patrangers HQ, the mood is not very happy. Noël Takao tells the other Patrangers that there is no collection piece that freezes and transports people meaning that it is Zamigo's personal power. On the plus side, this almost confirms that the Lupinrangers lost loved ones are still alive. The Patrangers show a bit of fear of Zamigo, but this sad session is cut short because Iselog is on the attack again with several ebi fried attacks reported. So, the Patrangers go looking for Iselog and suspicious looking fried ebi I have a love/hate relationship with food based attacks.

While searching around, Sakuya finds a depressed looking Umika on a local park bench. They have a moment where Umika tries to tell Sakuya about her problems without directly revealing what they are. As a result, Sakuya accidentally convinces Umika to ask Noël Takao for help about Zamigo and go against Tooma. This should lead to something interesting.

Elsewhere, Kairi followed the mysterious stranger from before because he figured out he was Iselog in disguise. Kairi knew what to expect and was able to steal Iselog's Lupin Collection Piece on his own. Called it. 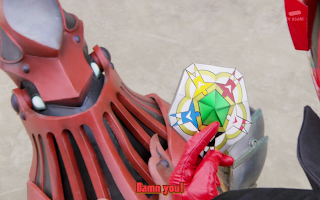 Kairi is about to finish the job using the new collection piece he got from the last episode that hasn't been used yet, when Zamigo shows up. Turns out he thawed Iselog just on a whim.

This is how they make someone took tough? Lipstick and white highlights?

Zamigo attacks Kairi with Iselog backing him up. This little struggle is quickly joined in by the other Lupinrangers. Finally, Kairi uses Victory Striker (the collection piece from the last episode) for a "Miracle Masqueraise". One "Super Kaitou Change" later and Lupin Red's new form is born. 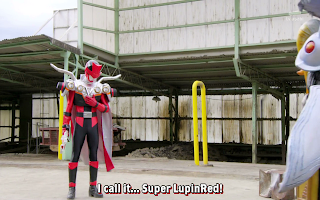 This would have been a semi shocking moment, if the preview didn't spoil it.

In this form, Kairi is not only stronger, but can read his opponents moves with brief visions into the future. How much more OP do the Lupinrangers need to be? Will the Patrangers ever get anything? 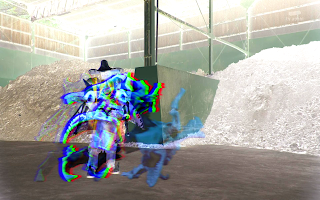 At this point the Patrangers finally show up and watch in awe at Lupin Red handling the mighty Zamigo all alone.

Zamigo takes some heavy hits and goes down, but is absolutely loving the experience. What is he a Saiyan? Tooma and Umika turn the dials on Kairi's shoulders which powers up his new finishing blow. Okay, that was a funny design. 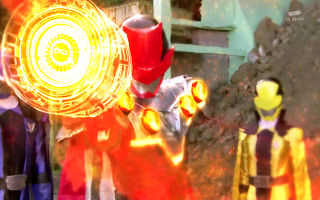 Zamigo manages to escape the finishing blow by teleporting Iselog in front of him. Dang! Afterwards, Zamigo states that Lupin Red can only predict so far into the future and leaves. That's still quite the powerful advantage even with that limitation.

Gouche appears and Iselog gets turned into a giant and the Lupinrangers form Victory Lupin Kaiser to fight. Iselog causes a city fire and the Lupin Rangers put it out with their fire engine arm. Then, a new form for Victory LupinKaiser is born; a flying mode. 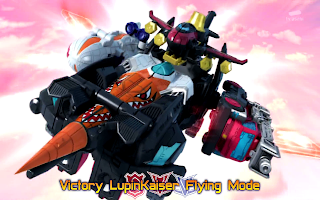 Throw a series of over complicated attacks, LupinKaiser finishes off Iselog with a drilling jump kick and the Rangers bid him an Eternal Adieu. That catchphrase gets darker the more I hear it.

The episode ends with both red rangers having realizations. Keiichiro noticed Lupin Red's rage and begins to piece together his connection to Zamigo. Also, Kairi notices that since Noël Takao didn't know about Zamigo then his lost loved one is either a different story or a lie. Dun dun dun!

The last thing we see is Destra getting drunk because of the shame he feels from failure and Gouche teasing him saying she can help him get revenge.

This episode felt necessary. It advanced the story greatly and things finally feel like they are moving towards the last chapter. It still bugs me how much the writers are favoring the Lupin Rangers, but at this point I've given up hope that they will give anything new to the Patrangers. It was as if the police's story was never planned out and just made up as they went. Regardless, the episode was still very solid, and while this might be the most overpowered super form I've seen from any Sentai, it at least came in late enough to be justified. 4/5