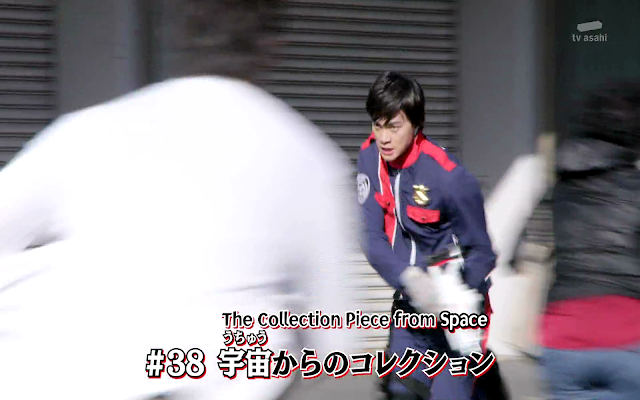 Gosh these are long titles. Hello, Red Diamond here again covering the 38th episode of Lupin vs Pat. Sounds like we are going into space with this episode. Will they meet Andros? Definitely not! But, click "read more" and let's see what really happens.

The episode begins at the Ganglers HQ where Zamigo has returned. (Zamigo is the ice Gangler that killed the Lupinrangers loved ones.) They hint at plot, possibly to get Destra some new collection pieces for his empty safes. Meanwhile, back at the Lupinrangers Bistro, it is shown that the Patrangers are losing trust in Noël Takao. Keiichiro gets a call about two Ganglers, cut to intro!

Now that was a basic setup for an episode.

One theme song later, the city is being bombarded by some funny looking missiles. 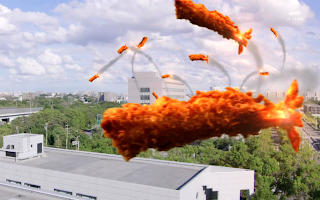 They kinda look like fired chicken. Or, maybe shrimp, or cheese puffs? I wanna say they're supposed to be lava.

Ignoring the silly designs, the Patrangers arrive to confront the two new Ganglers.


A shrimp and a snake. That, almost explains the missiles.

Iselog can shoots fried missiles, and Janake can control vehicles. Didn't the Carrangers already deal with that? The two sides don't struggle much before Zamigo shows up. Zamigo commands Janake to come with him and shoots Iselob when he tries to question why. (His freeze blast is a one shot kill.) I get the guys got a plan, but the two of them were kinda winning that fight. Wait, doesn't that mean one of the collection pieces is destroyed?

Cutting back to the Patrangers HQ, Commander Hilltop shows them footage of a new Lupin Collection piece that their space base found. Probably thanks to  Noël Takao, the Lupinrangers also have access to this footage. I would ask why the police have a space station, but given Sentai's track record it makes perfect sense.

I really hope the Patrangers get this one. Their arsenal is way behind the Lupinrangers.

Despite what the name implies, there is no traveling into space because Victory Striker is going to fly over Mt. Yumihiku. Smells like plot convenience. Sakuya suggests they tell Noël Takao about this but Keiichiro has already figured out that he already knows and is probably already at Mt. Yumihiku. Took them long enough to figure out he is favoring the phantom thieves.

The Lupinrangers are already waiting at Mt. Yumihiku and take off in their Dial Fighters to collect it. However, Janake returns, takes control of Victory Striker, and an air battle begins. 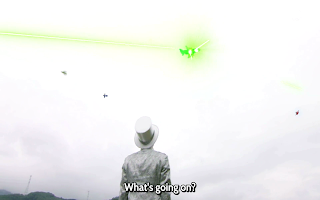 Noël Takao henshins into Lupin X and tries contronts Janake, but Destra shows up to stop him. Now its a double struggle.

Kairi jumps into the cockpit of Victory Striker but is unable to seize control. On the ground, Noël Takao is overwhelmed by Destra and things are not looking good. Finally, the villains fight back.

Before Destra deals the finishing blow, the Patrangers come to the rescue. Noël Takao is surprised that they would help him after all the suspicion. But, Keiichiro says that no matter how suspicious or secretive he gets they will always help. Moments like this show that they are the true heroes despite being unpopular. 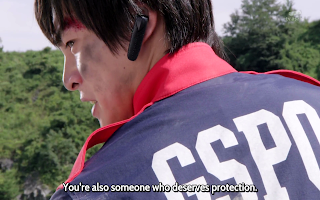 Bravo man! All in the line of duty.

The four Patrangers all henshin up and begin a second battle with Destra. Meanwhile, Kairi discovers a second vehicle inside of Victory Striker. Seriously?

I'm taking off a point if the Lupinrangers get both of them.

With this new blue tank thing, Kairi fires at Janake which causes him to fall over and allow Noël Takao to steal his Lupin Collection. 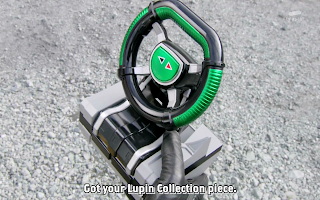 I think I saw one of those at a thrift shop once. What is up with the green and black color scheme they use on so many collection pieces?

Without the collection piece, Janake looses control of Victory Striker and Tooma is able to take control. Janake is then finished off by the Patrangers and is made giant. Destra also summons a giant purple thing to help Janake.

Janake cannot hurt Siren LupinKaiser at all and is completely overpowered. The Lupinrangers finish him off with their new Pulverizing Cannon. 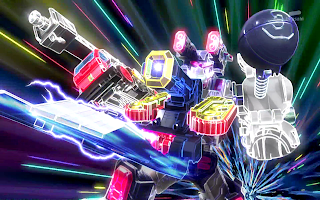 Janake goes boom, but they notice the Patrangers struggling against the giant purple thing since they cannot form Patkaiser since Goodstriker was already helping the Lupinrangers. 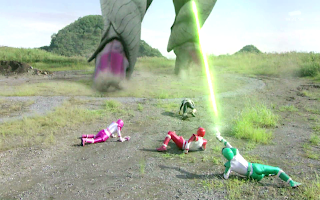 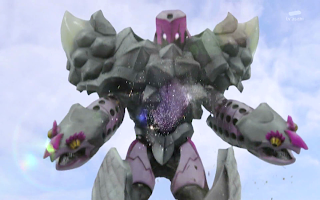 They can still summon their Dial Vehicles to fight separately, and Noël Takao is able to go Super Robo without Goodstriker. Gah!

This is literally last minute. Just had to squeeze one more toy in did they?

Noël Takao is now crazy strong with his shoulder cannons and is able to blast away the giant. He even gets a new finisher. Super Superieur Strike! He fires some missiles and the giant goes boom. 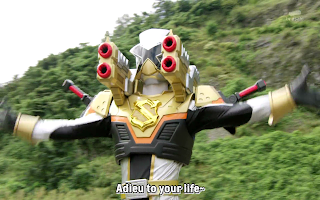 Too many lighting effects to take a decent picture of the attack sadly.

The episode ends with Noël Takao giving presents to the Patrangers while they all just accept the fact that they can't trust him. Except, he forgot to give a gift to Commander Hilltop. The End!

This episode was so close to being good, but it ruined it at the end. I can accept that Iselob was a wasted monster, except that it lead to plot wholes. First of all, Zamigo might have destroyed a collection piece when he iced Iselob and that is just ignored. Second, Iselob and Janake were set up as a fighting duo that instantly ended.

The final battles are a mixed feeling for me. They started out so good, with actual back and forth. However, Kairi just conveniently finding a second collection piece that was so good it fixed everything was lame. Also, the Lupinrangers already have more VS Vehicles than I was able to keep track of; why can't the Patrangers get anything? It was an even split at first, when one team got something the other got something else to counter balance. But, I am so sick of the Thieves getting favored. As a whole, this episode isn't terrible and actually did have some great moments, but it could have been so much better. I would normally give it a 3, but I'm keeping my promise from earlier. 2/5
Posted by Cendoo at 2:48 AM