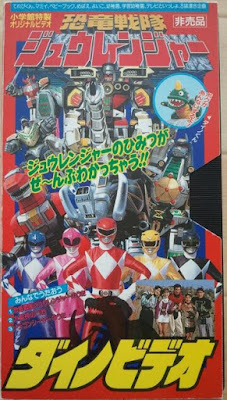 Well, here is something I never knew existed. Zyuranger is a season of Sentai without any movies (besides legacy appearances), but there was one odd special staring a green dino puppet brought to us by Shogakukan Video. The first of a new series of "Super Videos". This are made-for-video bonus content.  Not sure what to expect, so click "read more" and let's find out.

The special begins with the green dinosaur puppet named Dino-Kun (voiced by the famous Chika Sakamoto) fanboying over Zyuranger in what appears to be a cave set. This puppet appears to have some powers as it is able to blast a beam into the rock behind it which turns it into a TV playing Zyurangers. 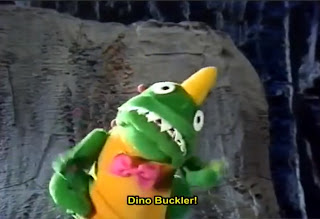 The Zyyranger Theme plays with a new video featuring clips from most of the season. When the theme song ends, the video stops which causes Dino-Kun to go on a tantrum, smacking the TV until the Zyurangers are pulled out of their battle and teleported into the cave. 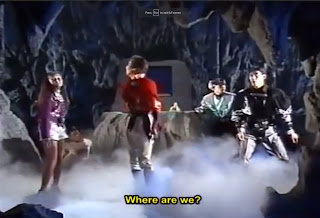 Dino-Kun is thrilled and the Zyurangers are confused. However, this confusion doesn't last long as the 5 of them instantly act friendly and introduce themselves while looking directly at the camera. This is giving me PBS Kids flashbacks.
Due to reasons, Dino-Kun's wish to see more Zyurangers to his cave. Geki tells him they were in the middle of training for their fight with Bandora, but Mei says it was break time anyway. (Which is inaccurate because the clip they were dragged out of was during a Megazord/Super Robo battle.) Now the fun begins as Dino-Kun pulls out his little microphone.
Dino-Kun asks the rangers about aspects of the show like their arsenal and powers and referencing various episodes which leads to a chip show. This right here can sum-up what this special is about, a chip-show and a beginners guide to the season for little kids with the company of a silly puppet character. Several music videos are also shown featuring the seasons sound track with even more clips from the show.
It can be assumed that this takes place near the end of the season because SPOILERS Buria is already dead but Bandora is not yet defeated.
This routine of question to clip-show continues on, but interestingly there is some original footage. When asked how tall King Brachion is, Mei compares him to a jump jet and some terrible animation is used for visual comparison.

Things do get a little interesting. When they begin talking about the power of each special attack, Dino-Kun creates a Dinometer to give them all a number based on strength. 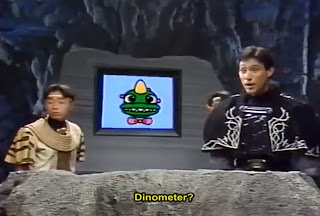 Basically, they play a clip of a signature attack and this little cartoon Dino-Kun will make a bunch of faces before landing on a number to measure the power of said attack. 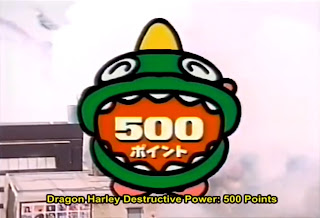 I'm going be honest, this is something I would have totally been into as a kid. Probably because I grew up with Power Levels from Dragonball Z.
This comes to an end in a funny way when they reach Ultimate DiaZyuJin's power which is so high it breaks the Dinometer. Really wish they did more than 3 though, or at least shown one of the non-mecha special attacks.
Finally, the Guardian Beasts call the Zyurangers to come back. Before leaving, the rangers give some generic advice for the kids like play outside, eat healthy & chew your food, and be nice to your friends. The Zyurangers henshin and return to their battle, as in more clips over the credits. It is moments like this that make me go "oh yeah, Super Sentai is a kids show!" 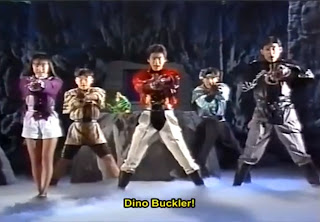 This is a hard thing to judge fairly as it was clearly meant as just a fun little bonus extra video DVDs. Admittedly, I'm not a big fan of clip-shows, and it is off putting to see the Zyurangers acting more comedically considering they come from one of the dark seasons. However, this is really not bad for what it is. The puppet is surprisingly lively as it had great voice talent and they gave it multiple eye expressions, the clips mainly focused on action which isn't boring, and the whole thing was short & face paced so it never felt dragging. Honestly, I feel like this is a special I am supposed to dislike for being corny and overly kid friendly, but I don't. It's really not bad and worth watching once if not only for the legacy behind it. Super Videos would continue for most seasons following this all the way up to Ninninger. 4/5
Posted by Cendoo at 12:00 AM