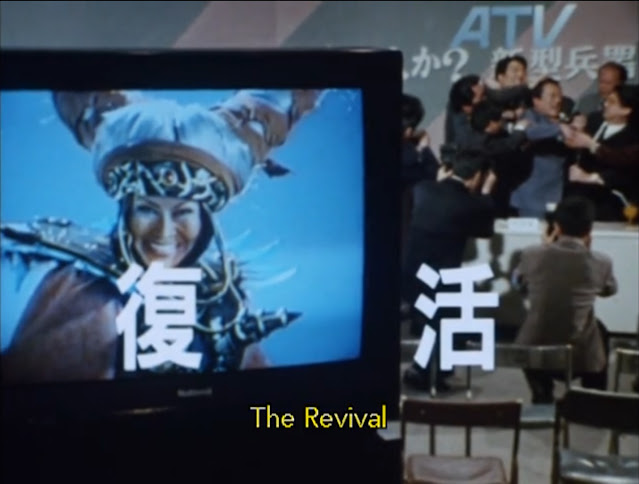 This episode is going to be the continuation of the last. Previously, the Zyurangers got their powers and almost rescued the child astronauts, but were ambushed by a giant. No time to waste, click "read more" and let's see how this chapter ends.

Following the theme song and a recap, the episode begins at a press conference where some politicians are arguing about whether to blame the aliens or the new weapons being developed for Earths predicament. I would make fun of this if it wasn't so accurate. Bandora appears on the TV and declares Earth will be left in ruins. And this is the title card.
Cutting away, the Zyurangers have apparently retreated as we see them back at their hideout where Dan is reading a comic. Boi and Mei are giving him a lecture for not taking the situation seriously. Also, Geki decided to read from a big book about the Dinosaurs and their tribes history along with the original battle against Bandora. A weirdly direct way to give backstory. Strange time to do it also. 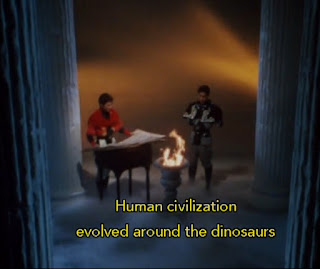 Geki mentions losing his parents and 10 year old sister to Bandora. Also, it is revealed that the 5 of them were put into a long sleep just in case Bandora ever escaped and. More importantly to the current plot, the 5 Guardian Beasts were mentioned. Looks like they're gonna be using Dino Zord Power....soon.
Cutting away, Bandora has placed her Palace on the Moon as a base of operation. 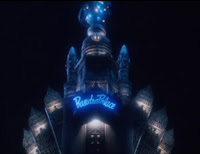 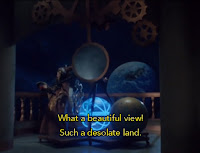 I have grown more appreciation for bases and HQs being very distinguished locations instead of just a room in an unspecified location.
While at this Palace, we can see the two children are still being held prisoner and appear unharmed other than being shrunk. Also, the next monster is being created. They are made out of some sort of clay, then put into a machine that turns them into Dora Monsters. 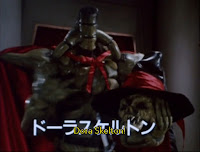 This monster is so much cooler because of the dated technology. A modern season would have had his head come off with CG instead of the practical effect used here.
The captive children are being launched back in Earth where they serve as bait for the Zyurangers. Naturally, when the Zyurangers see the toy shrunken shuttle on TV blasting through town, they rush onto the scene. Dora Skelton is teleported onto the scene where it attacks the Zyurangers. 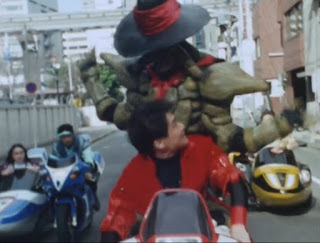 This is silly, but not a terrible way to try and take someone out. If he crashes that bike unmorphed than that is that. Also, that toy shuttle caused a skirt to fly up and that was unnecessary fanservice.
Dora Skelton teleports Geki to a carnival where they clash swords. The others somehow show up as well and they all begin battle unmorphed. Unfortunately, their weapons get destroyed and Dora Skelton can put himself back together no matter how many times he is sliced to pieces. Finally, the Zyurangers decide to henshin up and do their role call. Quickly following this, Dora Skelton teleports himself and the Zyurangers into a weird dimension where the shuttle is as well as his own special foot-soldiers.
As much as I like to see rangers who can fight unmorphed, I don't get why they waited. 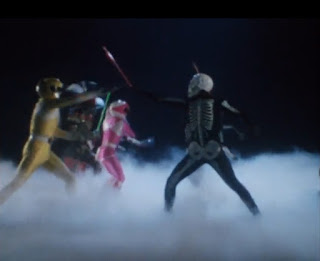 I feel old praising the old way they did things in Sentai so much but man, these villains left so much more of an impression back then.
While the Zyurangers battled against Dora Skelton and his goons, Bookback and Totpat appeared and secretly put a bomb next to the shrunken space shuttle. Seriously, why did they bring the Zyurangers there if they really wanted those kids dead? The Zyurangers quickly notice this and the battle becomes a race against time. Dora Skelton gets blasted to pieces by the Ranger Guns, but beings putting himself back together again. However, this time Dan grabs his head, wraps it in his cape, and tosses it to Boi to proceeds to slice through grunts and tosses the head down a pit to finish off the monster. 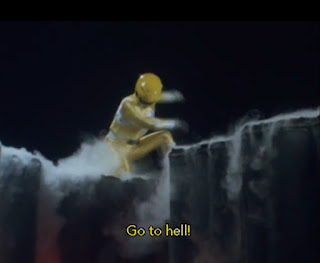 We all know that is what Trini wanted to say.
Dora Skeltons body goes boom and Geki saves the space shuttle. Unfortunately, the giant from the last episode appears again and grabs Geki. Dora Titan is back. 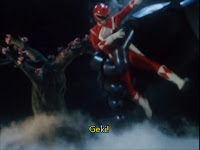 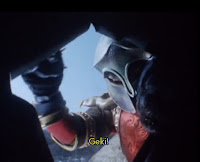 That big hand grabbing Geki away is impressive, remember this is before CG. But, was that dimension they were in made of paper?
The bomb goes off and knocks the other 4 rangers out of that strange area and Geki manages to get free by shooting the giant in the eye. Things aren't looking good as the giant continues to rampage. However, just in time, Geki's guardian best Tyrannosaurus summons himself. 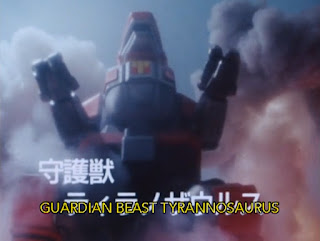 Barza telepathically tells Geki that Tyrannosaurus is his Guardian Beast and now we get our first giant battle. Dora Titan gets the first hit in with his sword, but takes a one from Tyrannosaurus' tail. Meanwhile, the other 4 Zyurangers have the shrunken shuttle and managed to free the kids. Somehow, simply jumping out of the shuttle turned them back to normal. What? 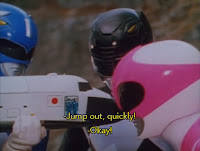 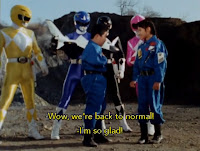 Why did that work?
Before leaving the shuttle, the Zyurangers had the kids start the thrusters in the shuttle. Now, they launch it at Dora Titan's face. Wait, I don't think the space station will like their shuttle being destroyed like that. The shuttle hits Titan and it is implied that did some damage; now Geki finishes the job by kicking Titan away and using a move called Tyranno Sonic which has Tyrannosaurus breath something onto the ground that travels toward Dora Titan and turns him into dust. Monster is defeated, the kids are safe, the Zyurangers face no responsibility for destroying an expensive space shuttle, and Bandora gets a headache. Yup, that was in Sentai too. Episode ends with the narrator wrapping up what just happened and the Zyurangers smile into the distance. THE END!

This episode was just as good as the first with a lot of action. If there were any nitpicks, it would be the Zyurangers at the beginning in their base giving forced backstory and Bandora's plan for the kids giving way to many opportunities for the Zyurangers to interfere. However, the good easily outweigh the bad. I appreciate being individual mechs some spotlight as that helps with both the writing and toy sales. Overall, it is a fun episode and reminds me of what is missing from the modern seasons. Old man talk. 4/5
Posted by Cendoo at 12:00 AM